The Transgender Craze Seducing Our Daughters 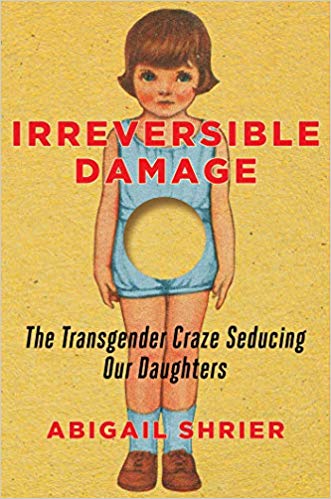 Irreversible Damage is an exploration of a mystery: Why, in the last decade, has the diagnosis “gender dysphoria,” transformed from a vanishingly rare affliction, applying almost exclusively to boys and men, to an epidemic among teenage girls?

Author Abigail Shrier presents shocking statistics and stories from real families to show that America and the West have become fertile ground for a “transgender craze” that has nothing to do with real gender dysphoria and everything to do with our cultural frailty. Teenage girls are taking testosterone and disfiguring their bodies. Parents are undermined. Experts are over-relied upon. Dissenters in science and medicine are intimidated. Free speech truckles under renewed attack. Socialized medicine bears hidden consequences. And an “intersectional” era has arisen in which the desire to escape a dominant identity encourages individuals to take cover in victim groups.

Every person who has ever had a skeptical thought about the sudden rush toward a non-binary future should read this book.

"Irreversible Damage is punchy, analytical and written with the zest and elegance of a journalist at the top of her game." — Christina Patterson, The Sunday Times

"Well-evidenced and thought-provoking…. This is a powerful glimpse of a crisis in the making." — Sarah Ditum, The Daily Mail

"Irreversible Damage accomplishes the Herculean task of revealing and explicating the history, circumstances, and repercussions of an ideology that has to a great extent targeted adolescent and teen girls, evidenced by a 4,000 percent increase in child referrals to gender clinics in the last ten years, most of whom are females. Shrier, a parent and Oxford-, Columbia-, and Yale-educated attorney and journalist who writes for the Wall Street Journal, digs deeply and widely into this phenomenon, interviewing doctors, researchers, teachers, therapists, transgender-identified adults, and transgender-identified children and their parents in a search for answers to two questions: ‘Why?’ and ‘What now?’ She parses out in shocking clarity how social media influencers, school administrators, medical and mental health practitioners, and calculated activism have created and propagated a social contagion that preys upon young girls as they navigate the struggles common to all females as they come of age…. An exhaustively researched and meticulously organized treatise that deftly interweaves strands of personal narrative, biography, exposé, investigative journalism, and parental guidance, Irreversible Damage draws back the curtain on a phenomenon cloaking itself as heroism while devouring with blood and malice a vulnerable and valuable segment of our next generation. Anyone who has daughters or cares about children should read this book." — Maria Keffler, The Federalist  (Read the full review)

"Abigail Shrier’s new book is an outstanding investigative report on the diagnostic craze of rapid onset gender dysphoria that has swept over adolescent girls in the past decade. It is an invaluable resource for parents, educators, church and community leaders, and anyone else who cares about the well-being of young women." — Jean C. Lloyd, Public Discourse  (Read the full review)

"A measured and relentless look at the damage the transgender movement has wrought in an unbelievably short amount of time. Shrier is giving us an opportunity to rethink the transgender craze sweeping the Western world." — Jonathon Van Maren, The American Conservative

"Gender transition has become one of the most controversial issues of our time. So much so that most of us simply want to avoid the subject altogether. Such evasion can be just the thing that gives the majority an excuse to look away from the suffering of our fellow human beings. Abigail Shrier chooses to take the bull by the horns. She dives straight into this most sensitive of debates. The product is a work brimming with compassion for a vulnerable subset of our population: teenage girls. It is a work that makes you want to keep reading because it is accessible, lucid and compelling. You find yourself running out of reasons to look away. A must read for all those who care about the lot of our girls and women." — Ayaan Hirsi Ali

"The woke left doesn’t want anyone questioning its dogma on transgender identity. But there’s much that the scientific, psychological and medical communities do not know about gender, and novel fields of study in particular rely on free and open inquiry. The left’s impulse to silence skeptics and dissenters on this and so many other subjects should be unacceptable in a free society." — The Editorial Board, The Wall Street Journal  (Read the full review)