The Estate of Josephine Herbst 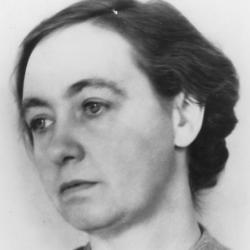 In the 1930s, Josephine Herbst (b. 1892) was widely regarded as one of the most important woman writers in America. She was a friend of Ernest Hemingway, John Dos Passos, Katharine Ann Porter, and Nathanael West. Yet by the time she died in 1969, she was all-but-forgotten. Herbst wrote the four autobiographical essays in The Starched Blue Sky of Spain and Other Memoirs, during the decade preceding her death, when her political and feminist insights were beginning to gain reconsideration.

In addition to her journalism and memoirs, she wrote a number of novels, including "The Trexler Trilogy:" Pity Is Not Enough, The Executioner Waits, and Rope of Gold, of which Harvey Swados in The American Writer and the Great Depression wrote, “Of all the imaginative and rebellious writers of the depression decade, Josephine Herbst has been perhaps the most seriously underestimated and surely the most actively adventurous…. With the exception of John Dos Passos, no other writer in the thirties had even attempted a fictional reconstruction of American life as sweeping and ambitious as Josephine Herbst's trilogy.”

As Diane Johnson wrote in her introduction to the first edition of The Starched Blue Sky of Spain and Other Memoirs, "We still live in a time that needs someone like Josephine Herbst to remind us of the uses of art and the meaning of a literary life."

THE STARCHED BLUE SKY OF SPAIN AND OTHER MEMOIRS (HarperCollins, 1991)