Sarah Josepha Hale and the Making of the Modern American Woman 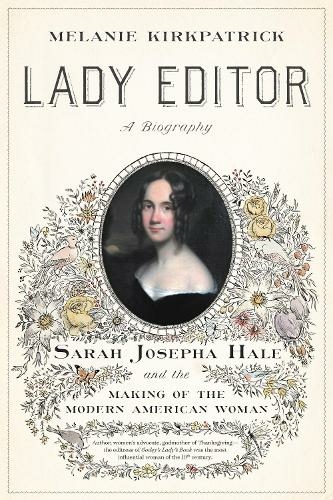 For half a century Sarah Josepha Hale was the best known and most influential woman in America. As editor of Godey’s Lady’s Book, Hale was the leading cultural arbiter for the growing nation. Many turned to her for advice on what to read, what to cook, how to behave, and—most important—what to think. Twenty years before the declaration of women’s rights in Seneca Falls, N.Y., Sarah Josepha Hale used her powerful pen to build popular acceptance of women’s right to an education, their right to work, and their right to manage their own money.

There is hardly an aspect of nineteenth-century culture in which Hale did not figure prominently as a pathbreaker.Her stamp of approval helped advance the reputations of such writers as Edgar Allan Poe, Harriet Beecher Stowe, Nathaniel Hawthorne, and Henry Wadsworth Longfellow. She wrote the first antislavery novel, compiled the first-ever women's history book, and penned the most recognizable verse in the English language, “Mary Had a Little Lamb.” She also introduced the Christmas tree and the white wedding dress to Americans.

Thanksgiving wouldn’t exist without Hale. She re imagined the New England festival as a patriotic national holiday and she conducted a decades-long campaign to persuade the public to coalesce around her idea. Abraham Lincoln took up her suggestion in 1863 and proclaimed the first in the series of national Thanksgivings that continues up to the present day.

Today, most of the women’s equity issues that Hale championed have been achieved, or nearly so. But women’s roles in what she and her contemporaries called the “domestic sphere” are less valued today than in Hale's era. Hale’s beliefs about women’s special obligations to family, their moral leadership, and their principal role in preparing children to lead useful lives continue to have relevance at a time when many American women believe feminism has failed them and are seeking better answers.

"Kirkpatrick brings Hale’s remarkable story vividly to life and makes the case that she deserves to be widely known and appreciated in our day, too. One reason she has not been is that there is too much in her life and thought that offends modern sensibilities. She makes for a complicated proto-feminist. In Kirkpatrick, Hale is fortunate to have a sympathetic and intelligent biographer. Over a few hundred brisk and engaging pages, Kirkpatrick traces the unlikely arc of Hale’s life with a journalist’s eye for the telling detail and a clear, direct style.... Kirkpatrick has dusted off the cobwebs — uncovering a mind worth encountering and an American life worth honoring." — Katherine Howell, National Review

"Fans of Melanie Kirkpatrick during her years on the Wall Street Journal will be delighted by her Lady Editor. It’s a pearl of a book in which one of our own era’s leading newspaperwomen pays homage to Sarah Josepha Hale, who, Ms. Kirkpatrick reckons, was 'one of the most influential women of the nineteenth century' but is 'all but forgotten in ours.' No longer. Born in 1788, Hale was propelled by widowhood into the workforce at a time 'before women could go to college, work as public school teachers, practice medicine, or even manage their own money.' Hale nevertheless became a pioneering writer and editor. Editing two influential publications—the Ladies’ Magazine and Godey’s Lady’s Book—she helped forge 19th-century American culture. When she became an editor, Hale sent four of her five children to live with relatives. Yet she proved that a woman could have it all. That adds up—for both Hale and her biographer—to a scoopJohn Bennett, The New York Sun" — John Bennett, The New York Sun  (Read the full review)

"Think of Sarah Josepha Hale as the great enabler of 19th-century American literature. As the formidable editor of the Ladies Magazine and then Godey's Lady's Book, Hale gave the careers of Harriet Beecher Stowe, Frances Hodgson Burnett and Lydia Sigourney their start, and fanned the flames of Longfellow, Whittier, and Edgar Allan Poe. Death and necessity were the fosterers of her talent, but her talent made American letters buzz. Philanthropy, monuments, Christmas trees and Abraham Lincoln all fell within her orbit. And how appropriate that a fellow journalist, Melanie Kirkpatrick, should bring Hale back in view in this lively and intriguing biography of the first-among-equals of American women." — Allen C. Guelzo, Princeton University, author of the New York Times Bestseller Gettysburg: The Last Invasion

"Before there was Anna Wintour, there was Sarah Josepha Hale, one of the most influential magazine editors of the nineteenth century. Thanks to Melanie Kirkpatrick, Hale finally has the biography she deserves—richly detailed and marvelously written." — Nathaniel Philbrick, author of author of the New York Times Bestseller Mayflower

"Sarah Josepha Hale was responsible for nothing less than legitimizing the American fashion industry and making permanent the most cherished of American holidays. Yet this powerful tastemaker and groundbreaking voice for “ladies”—so influential in both publishing and politics that she must rank as the Anna Wintour of the 19th century—has been all but erased from history. Fortunately, Melanie Kirkpatrick has rescued Hale from obscurity in an absolutely splendid biography that deserves a major place on the bookshelves of anyone interested in the neglected superstars of the nation’s past." — Harold Holzer, winner of the Gilder Lehrman Lincoln Prize for Lincoln and the Power of the Press

"Sarah Josepha Hale’s belief in the potential of women transformed the world of opportunities for women today. As editor of the popular Godey’s Lady’s Book, Hale championed women’s education, women in the workplace, and women’s often-undervalued work in the home. Teachers and doctors should be particularly grateful for her steadfast commitment to encouraging women to enter these occupations. Extensively researched and beautifully written, Melanie Kirkpatrick’s Lady Editor is an important and inspiring portrait of an extraordinary American." — Elaine Chao, former Secretary of Transportation and Labor, the first Asian-American woman to be appointed to the President’s cabinet, and a Distinguished Fellow at Hudson Institute