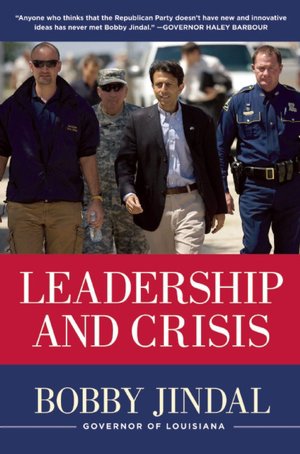 Bobby Jindal is not your typical politician. The son of Indian immigrants, a Christian convert from Hinduism, and a Rhodes Scholar, Jindal presided over Louisiana's healthcare system at age 24, headed the University of Louisiana system at 27, became a U.S. congressman at 33, and was elected governor of Louisiana at 36. Throughout his meteoric career, Jindal has dealt with some of the worst crises of our times, from natural disasters in his home state to out-of-control spending in Washington, D.C.

In Leadership and Crisis, Governor Bobby Jindal, one of the rising stars of the national conservative movement, tells his own remarkable story -- and lays out what was wrong with Obama's response to the oil spill. In the process, he explains what the characteristics of true leadership are -- bringing a refreshing conservative perspective to the most pressing issues of our time.

"The candid Leadership and Crisis, which Jindal wrote along with multi-book author Peter Schweizer and aide Curt Anderson… tells compelling stories. Stories of government inefficiencies and tragedies, but stories of redemption and reform, too." — National Review Online