The Great Image of Authority 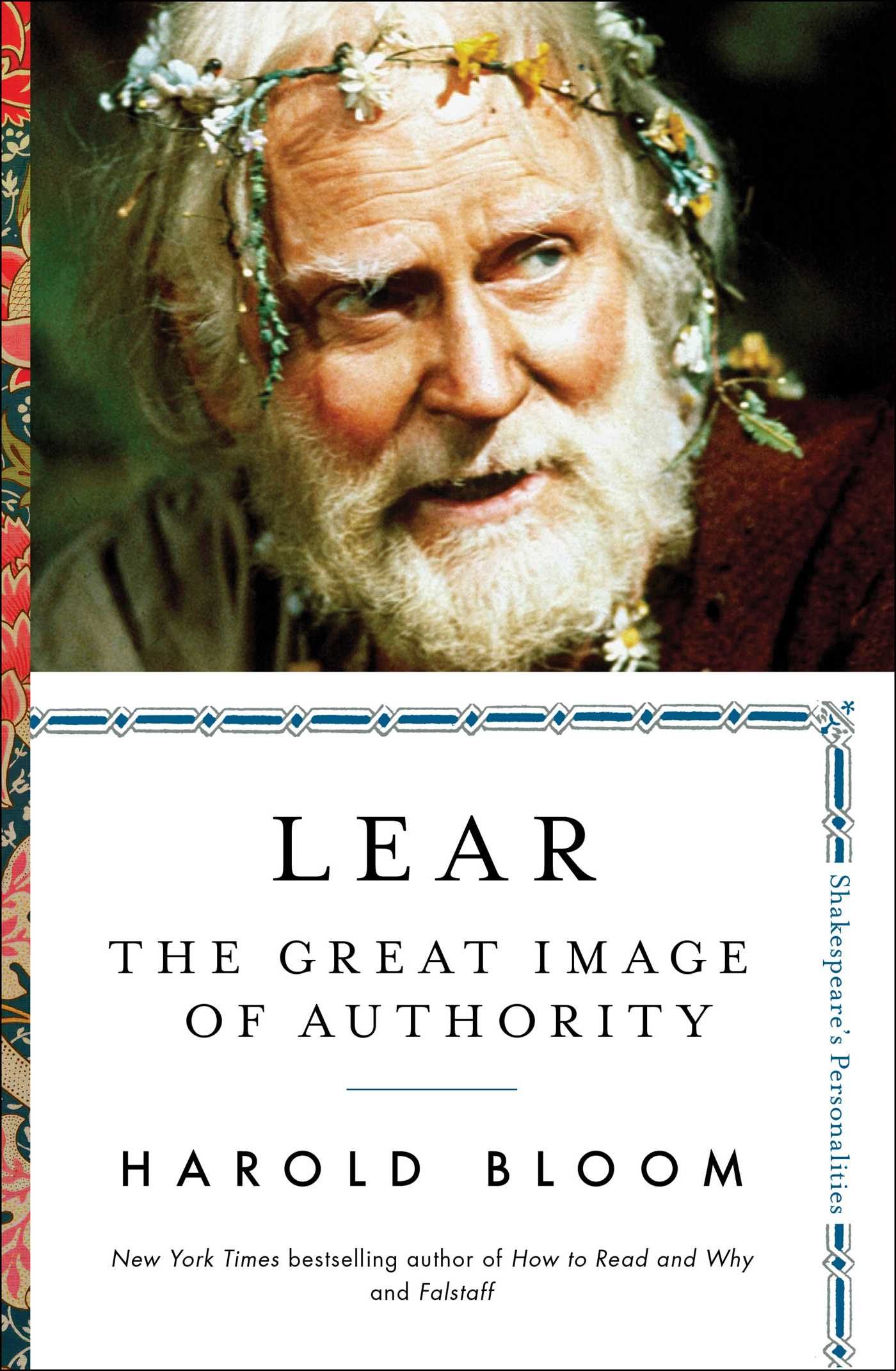 Lear: The Great Image of Authority is the third in a sequence of five brief volumes on “Shakespeare’s Personalities.”  The first and second, Falstaff: Give Me Life and Cleopatra: I Am Fire and Air, were published in April and October 2017. The fourth, Iago: The Strategies of Evil in May 2018 and the fifth and final volume Macbeth: A Dagger of the Mind in April 2019.

Harold Bloom, the greatest Shakespeare scholar of our time, presents an intimate, wise, deeply compelling portrait of King Lear—the third in his series of five short books about the great playwright’s most significant personalities, hailed as Bloom’s “last love letter to the shaping spirit of his imagination” on the front page of The New York Times Book Review.

King Lear is perhaps the most poignant character in literature. The aged, abused monarch—a man in his eighties, like Harold Bloom himself—is at once the consummate figure of authority and the classic example of the fall from majesty. He is widely agreed to be William Shakespeare’s most moving, tragic hero.

Award-winning writer and beloved professor Harold Bloom writes about Lear with wisdom, joy, exuberance, and compassion. He also explores his own personal relationship to the character: Just as we encounter one Emma Bovary or Hamlet when we are seventeen and another when we are forty, Bloom writes about his shifting understanding—over the course of his own lifetime—of Lear, so that this book also explores an extraordinarily moving argument for literature as a path to and a measure of our humanity.

Bloom is mesmerizing in the classroom, wrestling with the often tragic choices Shakespeare’s characters make. He delivers that kind of exhilarating intimacy, pathos, and clarity in Lear.

"Whether one is reading ‘Lear’ for the first time or the 14th, Mr. Bloom is a sure-footed pathfinder, clarifying arcane language, posing illuminating questions and weighing interpretations. It’s much like a deluxe DVD that, in addition to the film, includes an insider’s running commentary…. Mr. Bloom’s companionable reading is a master-class lecture for curious students, a compilation of fan’s notes on one of the most wrenching and mysterious works in English. Here he is the affective critic, measuring the emotional shocks delivered by the play until they outstrip our ‘resources to receive [their] increasing chaos.’ Mr. Bloom sometimes declines to offer decisive interpretations, accepting the play’s many suggestive but unfathomable recesses. ‘I could not better characterize both the tragedy, and Lear himself,’ he concludes, ‘than as, ‘the art of our necessities is strange.’" — David Yezzi, The Wall Street Journal

"Bloom’s understanding of Lear as a character has shifted with age, allowing him to appreciate aspects of the old king he couldn’t see at 17 or 40. This focused study showcases the erudition of one of our most eminent Shakespeare scholars." — The New York Times Book Review

"At the outset of this pithy exegesis of King Lear, Bloom describes the play's title character as, along with Hamlet, one of Shakespeare's 'most challenging personalities,' in part because 'his violent expressionism desires us to experience his inmost being, but we lack the resources to receive that increasing chaos.' As in other books in his "Shakespeare's Personalities" series, Bloom guides the reader scene by scene through the play, quoting long but well-chosen swaths of text and interjecting commentary that reveals the nuances of Shakespeare's word choices—for example, repeated references to nature, natural, and the unnatural, whose ominous repetition throughout the text foreshadows the depths of degradation to which Lear and the other characters will descend by the play's end. He is also deft at bringing out dramatic contrasts between characters, notably the juxtaposition of the Earl of Gloucester's loyal but naive son Edgar and his devious 'bastard' son Edmund, as well as parallels between characters—for example, between Lear and Gloucester, both of whom are betrayed by their children, or between Cordelia and the Fool, each of whom is chastised for speaking honestly. Bloom's short, superb book has a depth of observation acquired from a lifetime of study, and the author knows when to let Shakespeare and his play speak for themselves." — Publishers Weekly

"The noted critic and English professor digs deep to uncover what makes this play so profound. After books on Falstaff and Cleopatra, the third installment in Bloom’s Shakespeare’s Personalities series takes on King Lear, whom, along with Prince Hamlet, is one of ‘Shakespeare’s most challenging personalities.’ These two plays are the ‘ultimate dramas yet conceived by humankind.’ High praise indeed from the prolific author who, now in his late 80s, wrestles with the complexities of another man also in his 80s. Bloom brings this dark tale of a king in search of love to life via his incisive close reading of the text. As he writes, King Lear is the ‘most ironic of all tragedies, surpassing even Hamlet.’ Noting all the times the word ‘nothing’ is used, this ‘nihilistic play’ leaps ‘beyond hope, into nothingness.’ Lear has an ‘enormous need to be loved,’ especially by his youngest daughter, Cordelia. Her sisters, Goneril and Regan, Bloom writes, are ‘monsters of the deep, preying upon their victims, and at last on one another.’ The author does a fine job of explicating Edgar, the ‘just and rational avenger.’ In the first two quartos of the play, Bloom notes, Edgar is given special prominence in the play’s lengthy title. After Lear, he’s the ‘crucial personality in the drama.’ From Poor Tom to serving man to peasant to messenger to masked knight, ‘in all of Shakespeare, there is nothing like these astonishing metamorphoses.’ The ‘ultimate atrocities’ in the play are Cornwall’s gouging of Gloucester’s eyes, enacted before us, and the hanging of Cordelia, done offstage. ‘In what must be the shattering beyond all measure,’ writes Bloom, ‘in Shakespeare and indeed all Western literature, Lear enters with the dead Cordelia in his arms.’ A measured, thoughtful assessment of a key play in the Shakespeare canon." — Kirkus Reviews