The Unchecked Expansion of the State 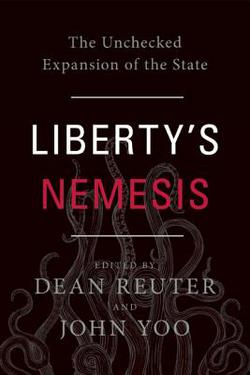 If there has been a unifying theme of Barack Obama’s presidency, it is the inexorable growth of the administrative state. Its expansion has followed a pattern: First, expand federal powers beyond their constitutional limits. Second, delegate those powers to agencies and away from elected politicians in Congress. Third, insulate civil servants from politics and accountability. Since its introduction in American life by Woodrow Wilson in the 20th Century, the administrative state’s has steadily undermined democratic self-government, reduced the sphere of individual liberty, and burdened the free market and economic growth.

In Liberty’s Nemesis, Dean Reuter and John Yoo collect the brightest political minds in the country to expose this explosive, unchecked growth of power in government agencies ranging from health care to climate change, financial markets to immigration, and more. Many Americans have rightly shared the Founders’ fear of excessive lawmaking, but Liberty’s Nemesis is the first book to explain why the concentration of power in administrative agencies in particular is the greatest – and most overlooked – threat to our liberties today.

If we fail to curb it, our constitutional republic might easily devolve into something akin to the statist governments of Europe. President Obama’s ongoing efforts to encourage just such a devolution, and the problems his administration faces as a consequence, present a critical opportunity to defend the original vision of the Constitution.


"Most of President Barack Obama’s critics believe that he has been trampling on the Constitution since his first days in office. Even the most hardened critics, however, will be taken aback by the sheer scale of the damage he has inflicted on the Constitution, in ways large and small. A new book edited by the Federalist Society’s Dean Reuter and law professor John Yoo of the University of California, Berkeley, puts the damage in historical perspective. The book brings together contributions from a sitting senator, a former congressman, a former attorney general, a former White House counsel, and a host of prominent scholars and former senior officials to catalogue the excesses of the Obama era. 'These scandals may have traveled different vectors before they landed on the White House,' writes Yoo, 'but they all flow from the same source — the overgrowth of the administrative state.' The presentation of their contributions in one volume reveals the underlying institutional dysfunction, a process 100 years in the making" — National Review

"In many important respects, we no longer live in a constitutional republic—we’re subject to the rule of an unaccountable administrative state. This the problem confronted in Liberty’s Nemesis. Although the U.S. Constitution does not expressly endow them with legislative prerogative, or even contemplate their current form and function, administrative agencies issue and enforce binding rules. They arrogate to themselves powers nowhere authorized by the Constitution or validated by historical Anglo-American experience. These agencies, moreover, govern quotidian activities once left to local communities and small businesses—everything from managing hospital beds to issuing permits to liquefied petroleum gas dealers. On both the state and federal level, administrative agencies have intruded upon local customs and practices and have imposed burdensome regulations on resistant groups, trades, neighborhoods, and civic associations." — The Federalist