Memories of a Daughter 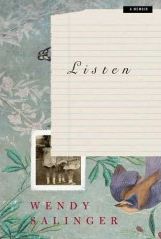 LISTEN is a memoir of voices, the voices of parents that linger in the ears of children until the day when those children are able to sound their own note. A domineering father and a professor of languages and literature in the 1950s and '60s, Victor has four women trapped in his orbit—his long-suffering wife and his three well-behaved daughters. "Teacher, poet, translator" is how he wants his gravestone to read, and in life he is dedicated to passing on to his family the great cultural achievements of western civilization—poetry, philosophy, religion, music, art. But he leaves darker gifts as well, in particular to his daughter Wendy the most traumatic legacy of all: incest.
A major achievement and a stunning debut, LISTEN is about how families shape their memories and how even things that are never spoken about have potent echoes. It's also a memoir that chronicles a poet's apprenticeship to words, the story of a daughter who listened and who, with the gift for poetry her father gave her, learned to translate the darkest secrets of their past.

"Wendy Salinger's LISTEN reminded me of THE HOURS by Michael Cunningham. The writing is perfectly beautiful: strip-mined jewels of language. Knowing her people is cumulative and extraordinary. I wept and I loved. LISTEN is a great book of great distinction." — Pat Conroy

"An absolutely beautiful, important and stunning piece of work. It will mean so much to so many people, not just because of its story, but because of the incredible texture of the language. So few books come out that are as aware as this one that words are the medium that we're breathing when we read." — Andrew Sean Greer

"Set to the rhythm of dreams, Wendy Salinger's LISTEN is an intensely lyrical, often shocking song of heartache laced with irony and wit—the poet's look at the poet's soul. An astounding accomplishment." — Josephine Humphreys

"Wendy Salinger recaptures her growing-up years with such lyricism and quizzical intelligence—she is, after all, a prize-winning poet—that she might be writing about a blessed childhood. And perhaps, from the outside, it seemed so at the time: a distinguished professor father and his devoted young wife raising their three lovely daughters as proper debutantes in the fading gentility of the 1960s South. Inside, however, behind closed doors and closed mouths, family life was a nightmare. Daddy, a preening bully, berated and belittled without cease. His wife and daughters absorbed the verbal blows, accepting their twisted relationships as normal to such an extent that when Daddy took to slipping into Wendy's bed, instructing her in sex as he instructed her in literature, composition, deportment, she thought it meant he loved her. Up to a point. Years later, after her father's protracted decline, obliquely raising the subject with her widowed mother, she was told, ‘Some things it's better not to know.’ Sylvia Plath comes, inevitably, to mind. Salinger, though, more solitary, deeply conflicted, writes not in the heat of fury but in a voice that is cool and luminous as moonlight, redolent of heartache yet also of survival, the latter a choice she has made." — Amanda Heller, The Boston Globe

"Anger and invective make dramatic reading, and poet Salinger's haunting memoir captures vividly the way her father's accusing, complaining, raging tirades against his wife filled their family life in the 1950s and '60s: at the dinner table (‘we were so full of your voice we could barely swallow’); in the car (‘Choke and throttle. Fumes, fuming’). But slowly the daughter reveals secrets she can still barely confront: Her domineering father, eminent professor and poet, sexually abused her…. The spare narrative is a stirring coming-of-age story, occasionally in verse, mostly in lyrical prose, with no closure. The biggest surprise is the submissive mother's story, revealed when he is in the hospital and there is space. It turns out that she is far more sophisticated than her family—and the reader—realized. But why did she do nothing? She knew. Her denial—‘once you say something out loud, you can't put it back’—is the unforgettable climax." — Booklist

"The title of LISTEN is both an admonition and a plea; it’s also a clue to how to read this impressionistic book. Wendy Salinger, a National Poetry Series winner, is an ornate stylist, but she also recognizes that words make up only part of any text. Here, she navigates the negative spaces between words and charts the distances between what is said and what we actually hear. Listening is ‘a form of power really,’ she reminds us, and her memoir is first and foremost a disturbing story of power relations. Salinger paints her father as a cranky and mean-spirited poet and professor of languages who felt he was underappreciated both at home and at the North Carolina university where he worked. Although he cruelly belittled his wife at every turn, it was Salinger who took the brunt of his aggression. Some books are called ‘difficult’ because they use big words and complex sentences, others because they invent new syntactical rules and sometimes break even those. There’s another kind of difficult book, though, one that details hideous interpersonal transgressions, such as incest. LISTEN includes all of these things, and in doing so reclaims for Salinger the power and authority her father denied her." — Andrew Ervin, The Washington Post Book World

"Listen is as much about itself as it is about the author’s life. That is, it’s about language…overflowing with the clamoring, insistent, pungent, sometimes spare but often lushly poetic words of this arresting book…. The household she describes is the most hair-raisingly dysfunctional family since the Oedipuses…. The default conversation between husband and wife is the peculiar kind of infighting that every marriage develops, but here honed to a keenness that cuts to the bone." — Richard Horwich, The East Hampton Star

"Wendy Salinger's memoir, LISTEN, takes its place in the literary landscape somewhere between Kathryn Harrison's sensational but numb memoir, THE KISS, and Sue Miller's moving portrait, THE STORY OF MY FATHER. Harrison's chronicle of incest located the father as sexual predator; Miller's memoir detailed a father's agonizing decline through Alzheimer's. Sex and death, so closely related at all times, make an irresistible narrative braid, and they precipitate a kind of crisis of loyalty for the daughter who tells the story in LISTEN: hatred of an abusive parent, admiration for the gift of learning he has given her, and pity for the undoing of a human being by illness. The title of Salinger's book is significant and seems intended as an imperative, as in: Listen to what I have to say to you. It is Salinger who has the last word, but it is her father, here named Victor, a German American college professor, translator and poet, husband of a submissive wife and parent of three daughters, who dominates the story. Indeed, one of the significant accomplishments of Salinger's narrative is that it ventriloquizes so successfully, speaking not only in the voice of the misogynistic and limitlessly narcissistic father, but also in the voices of the silenced females. By this means, the narrative reclaims life for those who have survived the tyrant, even as it seeks to balance his sins against his assets.... A poet's sensibility is apparent in this memoir…in the ironic resonance and above all the sense of silence and the unspoken that create a constant emotional undertow beneath the surface of the prose…. Such ambiguity is not accidental; it is the result of careful thought and craft…language not as a tool of gaudy confession but as a medium of scalding moral reckoning." — Karl Kirchwey, The Philadelphia Inquirer