The Anatomy of Influence

Literature as a Way of Life 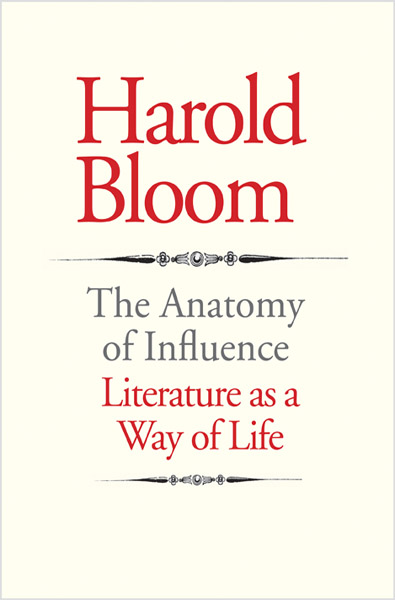 "Literary criticism, as I attempt to practice it," writes Harold Bloom in The Anatomy of Influence, "is in the first place literary, that is to say, personal and passionate."

For more than half a century, Bloom has shared his profound knowledge of the written word with students and readers. In this, his most comprehensive and accessible study of influence, Bloom leads us through the labyrinthine paths which link the writers and critics who have informed and inspired him for so many years. The result is "a critical self-portrait," a sustained meditation on a life lived with and through the great works of the Western canon: Why has influence been my lifelong obsessive concern? Why have certain writers found me and not others? What is the end of a literary life?

Featuring extended analyses of Bloom's most cherished poets—Shakespeare, Whitman, and Crane—as well as inspired appreciations of Emerson, Tennyson, Browning, Yeats, Ashbery, and others, The Anatomy of Influence adapts Bloom's classic work The Anxiety of Influence to show us what great literature is, how it comes to be, and why it matters. Each chapter maps startling new literary connections that suddenly seem inevitable once Bloom has shown us how to listen and to read. A fierce and intimate appreciation of the art of literature on a scale that the author will not again attempt, The Anatomy of Influence follows the sublime works it studies, inspiring the reader with a sense of something ever more about to be.

"In his 81st year, Bloom's intellect is as acute, as comprehensive and as fiery as ever. The breadth of thinking and the range of reference in The Anatomy of Influence are astonishing." — John Banville, The Guardian

"As defender of the Western canon, the controversial Bloom has no equal.... Bloom's elegant and accessible writing will be welcomed by serious readers." — Nancy R. Ives, Library Journal

"Arguably the most influential critic of the last quarter century. He elevates critical writing to the level of literature itself." — The New York Times Book Review

"Harold Bloom is one of the greatest literary critics of his time...a man who like Tennyson's Ulysses is a part of all that he has read." — The Washington Post

"[Bloom] is the reader as human medium, an instrument through whom inspiration strikes: in turn he renders visible the lineament of other writers' imaginations while articulating the generally inchoate and undeveloped responses of the average reader....Magnificent....He is never less than memorable." — Peter Ackroyd, The Times (London)

"Harold Bloom reminds us what matters. He is our most valuable critic." — Boston Globe

"Bloom...has many interesting things to say and says them, often, with exquisite precision. He is, by any reckoning, one of the most stimulating literary presences of the last half-century--and one of the most protean, a singular breed of scholar-teacher-critic-prose poet-pamphleteer." — Sam Tanenhaus, The New York Times Book Review  (Read the full review)

"Bloom reveals his own magisterial, sometimes mischievous self, in his meditations on the masters with whom he connects." — Iain Finlayson, The Times (London)

"The Anatomy of Influence crackles with a rhetorical energy." — John Derbyshire, The New Statesman

"Bloom is fighting the good fight for literature." — The Observer (U.K.)

"In The Anatomy of Influence, Bloom pulls off a masterly connecting of the dots through the literary canon and his own life with his usual breathtaking eloquence." — Publishers Weekly

"The distinguished critic again examines the interactions among writers that have been the main focus of his attention since The Anxiety of Influence (1973). As in that seminal work, Bloom takes a decidedly Freudian view of literature, depicting each generation of artists struggling with the titans of the past to carve out their own place in the pantheon…. Readers will find his usual closely argued exegeses of the writers he loves—and that love goes a long way toward atoning for his aggressive contentiousness…. But we wouldn’t want Bloom to be anyone but Bloom: an old-fashioned literary critic passionately committed to art for art’s sake." — Kirkus Reviews