A Dagger of the Mind 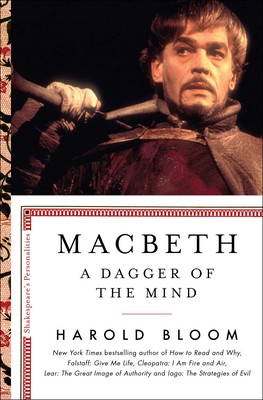 Macbeth: A Dagger of the Mind is the fifth and final volume in a sequence of brief books on “Shakespeare’s Personalities.”  The first was Falstaff: Give Me Life, April 2017, and the others are Cleopatra: I Am Fire and Air, October 2017; Lear: The Great Image of Authority, April 2018; and Iago: The Strategies of Evil, May 2018.  All of the books were published in the U.S.A. by Scribner.

From the ambitious and mad titular character to his devilish wife Lady Macbeth to the moral and noble Banquo to the mysterious Three Witches, Macbeth is one of William Shakespeare’s more brilliantly populated plays and remains among the most widely read and performed. Macbeth is a distinguished warrior hero, who over the course of the play, transforms into a brutal, murderous villain and pays an extraordinary price for committing an evil act. A man consumed with ambition and self-doubt, Macbeth is one of Shakespeare’s most vital meditations on the dangerous corners of the human imagination.

Award-winning writer and beloved professor Harold Bloom investigates Macbeth’s interiority and unthinkable actions with razor-sharp insight, agility, and compassion. He also explores his own personal relationship to the character, writing about his shifting understanding—over the course of his own lifetime—of this endlessly compelling figure, so that the book also becomes an extraordinarily moving argument for literature as a path to and a measure of our humanity.

Bloom is mesmerizing in the classroom, wrestling with the often tragic choices Shakespeare’s characters make. He delivers that kind of exhilarating intimacy and clarity in Macbeth: A Dagger of the Mind, the final book in an essential series.

"Acclaimed critic Bloom once again plumbs the depths of a Shakespeare play to reveal new insights, this time offering a richly detailed character sketch of Macbeth. In a close, scene-by-scene reading, Bloom presents Macbeth as an ambitious visionary driven by a ‘prophetic imagination,’ while leaving death and destruction in his wake. Referring to Macbeth’s vision of the bloody dagger, Bloom frames the character’s too-active imagination as a ‘dagger of the mind,’ and his tragic flaw as the ‘fantasy-making power’ that allows him to easily picture himself as king after hearing the witches’ prophecy. As the play progresses, Bloom finds Macbeth growing ever more frustrated by his failure to achieve his desires, and remarks that it is ‘difficult not to sympathize with a powerful representation of outrage,’ causing the audience to identify with Macbeth despite his crimes. Even Lady Macbeth, as Bloom describes her, possesses a ‘negative exuberance of shuddering beauty,’ though this diminishes after the play’s early scenes as the passion between her and her husband wanes and her own desires become frustrated. As he has so often done, Bloom will shift the reader’s perceptions of a literary classic." — Publishers Weekly

"Having previously presented brief volumes on Iago, Lear, Cleopatra, and Falstaff, Bloom walks us through Macbeth, quoting lengthy passages from the text to illuminate his points. Throughout, the author muses on Macbeth’s ‘proleptic and prophetic imagination’ and wonders—all the way to the final paragraph—what it is about this sanguinary, murderous character that so deeply appeals to audiences. For example, Bloom lingers on the grim and grotesque Macbeth-ordered murder of Macduff’s wife, son, servants. Although Bloom condemns these events (more than once and unequivocally: ‘his greatest iniquity’), he also notes that, somehow, we still feel something of a loss when Macduff, later, carries Macbeth’s severed head onto the stage for us to see. Although Bloom’s interpretations are invariably sound and based on a lifetime of reading and teaching the play, there are times when he ventures near the border of the plausible.... Bloom ends with some tributes to the power of Shakespeare’s language and imagination. ‘Shakespeare’s bounty, like his Juliet’s, is as boundless as the sea. The more you take, the more he has, for his invention and his love for his characters are alike infinite….For all his negativity, Macbeth’s vitality survives in our hearts....absorbing him heightens of sense of being.’ Older readers may wish this clear, concise, empathetic volume were available when they were in school." — Kirkus Reviews

"Bloom has had a long and distinguished career as teacher and scholar. Nearing 88, he continues his prodigious publishing output with this fifth volume in his new series, 'Shakespeare Personalities'; previous entries have dealt with William Shakespeare's Falstaff, Cleopatra, King Lear, and Iago. Although the titles suggest a focus on one character, these volumes amount to an annotated text of the play(s) in which the character appears. Throughout, Bloom offers a running commentary, ranging from a single sentence to over a page in length, including theatrical reminiscences, plot summary, paraphrase, historical background, personal reaction, and explication." — Joseph Rosenblum, Library Journal