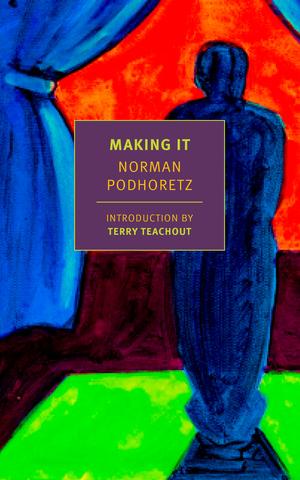 Norman Podhoretz, the son of Jewish immigrants, grew up in the tough Brownsville section of Brooklyn, attended Columbia University on a scholarship, and later received degrees from the Jewish Theological Seminary and Cambridge University. Making It is his blistering account of fighting his way out of Brooklyn and into, then out of, the Ivory Tower, of his military service, and finally of his induction into the ranks of what he calls “The Family,” the small group of left-wing and largely Jewish critics and writers whose opinions came to dominate and increasingly politicize the American literary scene in the fifties and sixties. It is a Balzacian story of raw talent and relentless and ruthless ambition. It is also a closely observed and in many ways still pertinent analysis of the tense and more than a little duplicitous relationship that exists in America between intellect and imagination, money, social status, and power.

The Family responded to Podhoretz’s book with outrage, and Podhoretz soon turned no less angrily on them, becoming the fierce neoconservative he remains to this day. Fifty years after its first publication, this controversial and legendary book remains a riveting autobiography, a book that can be painfully revealing about the complex convictions and needs of a complicated man as well as a fascinating and essential document of mid-century American cultural life.

"Writing as lucid and vital as Podhoretz’s is not often encountered and should have been acknowledged. But the original critics were evidently too irked with the boy wonder to give him an inch. Perhaps more to the point, they could not distinguish between the book’s narrator and its author. When we read a novel narrated in the first person we do not make that mistake." — Janet Malcolm, The New York Review of Books  (Read the full review)

"Making It is a book about what Norman Podhoretz, borrowing the term from Murray Kempton, calls the Family—the writers and editors, mostly but not exclusively Jewish, who dominated the New York intellectual scene in the decades after the war. It is as their proud product that Podhoretz presents himself, and he obviously hoped to retain the approval of these people, as he had done so often in the past, by daring to write something they were afraid to write. He believed that they would admire his courage, recognize the justice of his account, forgive any indiscretions he may have committed, and, freed at last from a stifling hypocrisy, embrace him and the book...." — Louis Menand, The New Yorker, May 1 2017, "The Book That Scandalized the New York Intellectuals"  (Read the full review)

"One can’t really understand the state of so-called highbrow culture today without first coming to terms with the career of Norman Podhoretz. Along with Jason and Barbara Epstein, Robert Silvers, Susan Sontag, Norman Mailer and a few others (the ‘children’ of Edmund Wilson, Lionel Trilling and Philip Rahv), Mr. Podhoretz reconceived the very idea of what it means to be an intellectual." — Robert S. Boynton, The New York Observer

"This masterpiece of American autobiography is the tale of a striving, self-mythologized, and nearly Melvillean figure crashing toward his own salvation—and more.... Nearly 50 years on, it’s clear that, to paraphrase Dostoevsky on Gogol, we all come out from Podhoretz’s overcoat." — Lee Smith, Tablet

"A frank and honest book...high-stepping brilliance...tactfully and touchingly revealing of the fearful ambitions of Podhoretz’s family.... Podhoretz has ‘allowed himself to be fully known’ and so may give the key to the B.Y.M. (Bright Young Men) of the next generation, which will allow them to shuck the iron mask of premature intellectual good taste and join in the common pursuit of self-knowledge and self-expression." — Frederic Raphael, The New York Times