From Outlaws to In-Laws 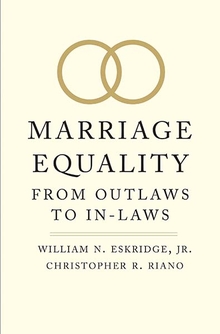 As a legal scholar who first argued in the early 1990s for a right to gay marriage, William N. Eskridge Jr. has been on the front lines of the debate over same-sex marriage for decades. In this book, Eskridge and his co-author, Christopher R. Riano, offer a panoramic and definitive history of America’s marriage equality debate.  The authors explore the deeply religious, rabidly political, frequently administrative, and pervasively constitutional features of the debate and consider all angles of its dramatic history.

While giving a full account of the legal and political issues, the authors never lose sight of the personal stories of the people involved, or of the central place the right to marry holds in a person’s ability to enjoy the dignity of full citizenship. This is not a triumphalist or one-sided book but a thoughtful history of how the nation wrestled with an important question of moral and legal equality.

Winner of the 2021 Silver Gavel Award from the American Bar Association!

"Eskridge and Riano have written a comprehensive account of the long struggle for same-sex marriage. Though ostensibly a legal history, this work is much more than that as the authors interweave stories of people, some well-known, others not, into a compelling narrative. Included are conflicts over the various propositions that tried to overturn marriage equality, including California’s notorious Proposition 8. Following early attempts at civil unions and rights came Hawaii’s pioneering supreme court case granting same-sex marriage. After that, came pushback via the Defense of Marriage Act. Finally, in 2015, Obergefell v. Hodges granted marriage equality throughout the United States. Eskridge and Riano take the story of growing LGBTQ acceptance into the present, taking note of ongoing issues surrounding marriage equality. Most notably, they draw attention to the questions such as whether or not a business can have a religious exemption for providing a service for a same-sex couple. VERDICT: Though lengthy, the work is beautifully and accessibly written. Both general and academic readers will appreciate its comprehensiveness as well as its attention to the human side of the story. An essential work." — Library Journal (starred review)

"Law scholars Eskridge and Riano document the legal, political, and religious arguments for and against same-sex marriage, as well as stories of gay couples who fought for their relationships to be legally recognized, in this comprehensive history of the battle for equal marriage rights in America…. The sheer volume of information (including a six-page glossary of terms and acronyms) staggers…. Still, Eskridge and Riano lighten the proceedings with a playful sense of humor and portraits of the people behind the lawsuits. LGBTQ allies and legal students will be rewarded by the impressive survey of how far the gay rights movement has come." — Publishers Weekly