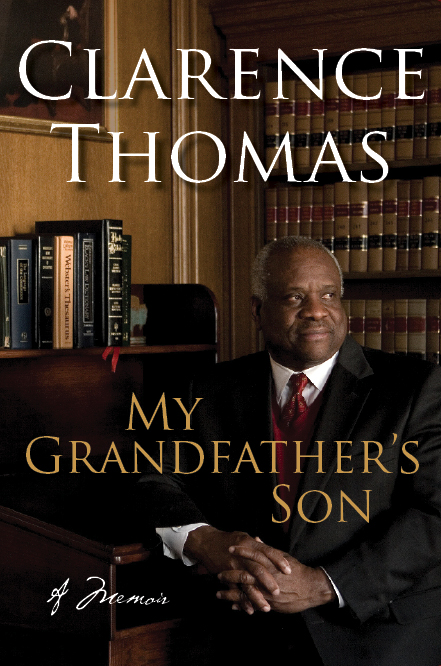 Provocative, inspiring, and unflinchingly honest, MY GRANDFATHER'S SON is the life story of one of America's most remarkable and controversial leaders, Supreme Court Justice Clarence Thomas, in his own words. Thomas was born in rural Georgia on June 23, 1948, into a life marked by poverty and hunger. His parents divorced when Thomas was still a baby and his father moved north to Philadelphia, leaving his teenage mother to raise him and his brother and sister on the $10 a week she earned as a maid. At age seven, Thomas and his six year old brother were sent to live with his mother's father, Myers Anderson, and her step-mother in their comfortable Savannah home. It was a move that would forever change Thomas's life.His grandfather, whom he called "Daddy," was a black man with a strict work ethic trying to raise a family in the years of Jim Crow. Thomas witnessed his grandparents' perseverance despite injustice, their hopefulness despite bigotry, and their deep love for their country. That quiet determination would propel him all the way to Holy Cross and Yale Law School, and eventually—despite a bitter, highly contested public confirmation—to the highest court in the land. In this candid and deeply moving memoir—a quintessential American tale of hardship, grit, and success—Clarence Thomas shares his astonishing journey for the first time, and pays homage to the man who made it possible.Intimately and eloquently, Thomas speaks out, revealing the pieces of his life he holds dear, detailing the suffering and injustices he has had to overcome, including the acrimonious and polarizing Senate confirmation hearing involving a former aide, Anita Hill, and the depression and despair it created in his own life and the lives of those closest to him. MY GRANDFATHER'S SON is the exceptional story of a determined man whose faith, courage, and perseverance inspired him to rise up against all odds and achieve his dreams.