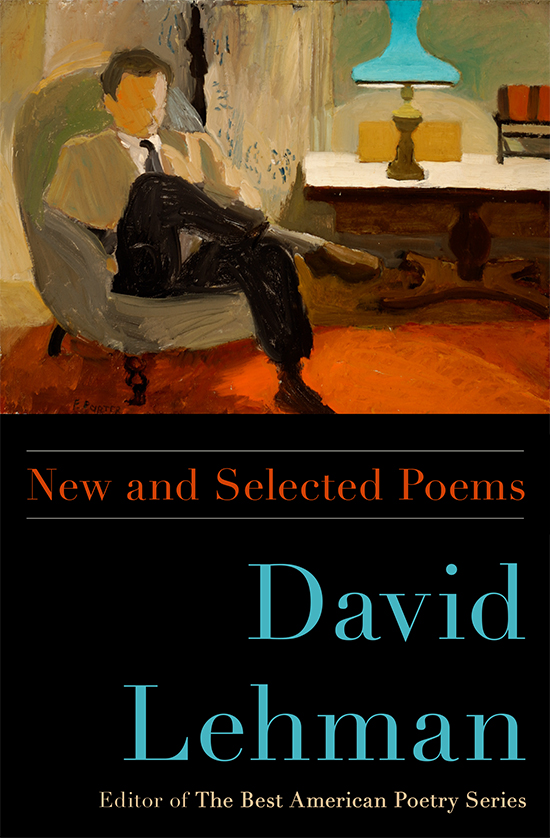 Drawing from a wealth of material produced over the course of more than forty years, David Lehman's New and Selected Poems displays the remarkable range of his poetic genius. A gathering of stunning new poems, prose poems, and translations from modern French masters ushers in the book. Selections from each of Lehman's seven full-length books of poetry follow and are capped off by a coda of important early and previously uncollected works. Lehman writes poems that captivate as they stimulate thought, poems that capture the romance, irony, and pathos of love, and poems that are lyrical and lovely in unexpected, sometimes even comic ways. This is David Lehman at his best.

"The fact that he’s so heavily steeped in poetry makes him a poetry-lover’s poet supreme." — Booklist

"Lehman enjoys an unquestionable prominence in American poetry, as much for his energetic editorial and critical work (he edits the Best American Poetry series) as for his own much-praised verse. This seventh volume and first selected places the poems themselves at center stage: they steer an entertaining, zigzag path between nonchalant Jewish-American autobiography and whimsical experiment. Lehman shows a genius for comic one-liners, for the humor at the root of pathos and the pathos inside tragedy: 'my favorite word is 'you.' I love 'you'; 'You either live too long or die too young--/Nothing else is real, not even your childhood.' Especially in 50 pages of brand-new poems, Lehman mixes personal reminiscences with literary history, with results that defy realism but capture a certain extroverted tone: 'Rabbi Kafka escaped to Mexico. Details are sketchy.' Early books show his way with game-like forms: daily poems, sestinas, and villanelles. (A handful of 'early and uncollected' poems conclude the volume.) Skeptics may complain that Lehman's verse is often too conversational and too low-pressure; admirers will connect it instead to the comic side of the New York School to Ashbery and Koch. Attuned to the life of his own generation, and the mechanics of memory, Lehman remains a nonpareil creator of quotable remarks, often about how we write or about how we read: ‘The idea was to have a voice of your own... The result was that everybody sounded alike.’" — Publishers Weekly (starred review)

"The presiding editor of The Best American Poetry heavily seasons his own work with...poetry. His lines echo others from Blake, Donne, Frost, Keats, Eliot, Dickinson, the Great American Songbook, and many others, usually not in poems that cite them by name and never to flout his knowledge. He’s formally various, essaying the sonnet, the villanelle, the sestina, and many less demanding forms, though he tweaks each a bit. Perhaps his happiest bouts of allusiveness are in his journals in poetry, The Daily Mirror (2000) and The Evening Sun (2002)…. The couplets of “Mythologies,” from Operation Memory (1990), which rhyme when diction allows rather than regularly, are pretty delightful, too. Lehman’s no reactionary, though, but thoroughly modernist. His matter is personal, his language common, and his manner surrealist. But the fact that he’s so heavily steeped in poetry makes him a poetry-lover’s poet supreme." — Booklist