The Everything of Its Two-Thousand-Year History 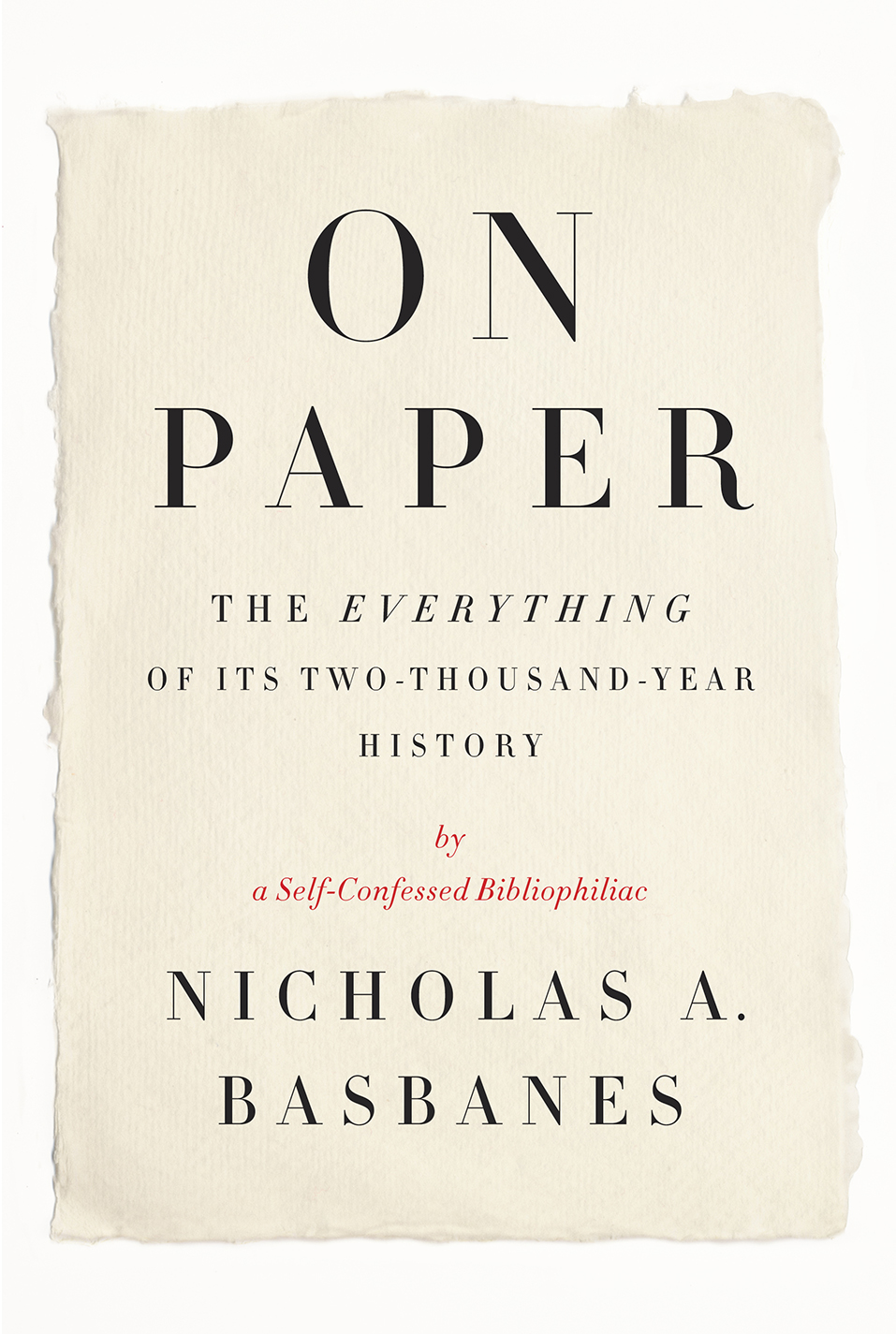 A cultural examination of paper and papermaking over the past two thousand years, On Paper succeeds Dard Hunter's classic work, Papermaking: The History & Technique of an Ancient Craft, first published in 1943, also by Alfred A. Knopf, and still in print.  Nicholas Basbanes, author of A Gentle Madness (a National Book Critics Circle Award finalist) takes readers on a tour of paper's history while exploring its many uses in a striking variety of ways. He visits ancient papermaking sites in China and Japan where paper is made by hand in much the same way as it was when first invented.  Selective visits to modern paper mills illustrate the various uses of paper today, each presented within a historical context, with currency and toilet paper-quite literally going from one extreme to the other-among them.  It also features visits to various document and manuscript archives, and interviews with a master forger for the CIA now the subject of a major motion picture (Argo) and a Living National Treasure papermaker in Japan. Other chapters include profiles of master origami folders and textual scholars at work on the papers of such seminal figures as Leonardo da Vinci and Ludwig van Beethoven. It is no wonder that the Chinese regard paper as one of their four great inventions of antiquity:  it has played a fascinating role in human progress and remains essential to daily life despite predictions of a paperless future.

"The conference began with a keynote address by Nicholas Basbanes, a journalist and cultural historian who is also known as the author of the globally acclaimed book On Paper." — KOREA.net

"Basbanes' renowned books about books, from A Gentle Madness (1999) to Every Book Its Reader (2005), are shaped by his investigative journalist's curiosity and skill as well as a penchant for the underappreciated. In his latest lassoing inquiry, he unfolds the two-thousand-year story of paper…. Combining crisp technical explanations with vivid historical and contemporary profiles... Every facet of this celebration of paper is engrossing and thought-provoking, leading up to the dramatic conclusion, in which Basbanes recounts deeply affecting stories about the 'paper rain' that covered New York City on 9/11. Paper, Basbanes avers, is nothing less than an embodiment and conveyance of humanity." — Donna Seaman, Booklist (starred review)

"Basbanes is an especially congenial writer, a quality he displayed memorably in A Gentle Madness, his 1999 history of book collecting and collectors. He does it again most pleasurably in On Paper, a wide-ranging investigation into the 'everything' of that ubiquitous and indispensable construction of cellulose fibers whose history paralleled—and made possible—the rise of civilization." — David Walton, Dallas Morning News

"Nicholas Basbanes is something of a national treasure, bringing what is often called ‘book culture’ in front of us. In an age of the digital page, when books can be downloaded, when e-mail and twitter are developing a distinctive lexicon and rhetoric, when the book itself seems to be on its way out of our private and public culture, Basbanes returns us, again and again, to the importance of paper, as we knew it, know it, and, hopefully, shall maintain it. On Paper celebrates that ‘ubiquitous’ commodity, and its manifold uses. This book is characteristically engaging and authoritative…. On Paper is, in part, an historical mapping of the spread of paper; wherever it went, so, too, did it carry our transactions, in the largest sense possible. However, Basbanes is not writing a book confined to the geography of paper. Among the pleasures of reading On Paper is Basbanes’ search for paper’s various manifestations, their means of production, uses, and consequences." — Lewis Fried, The Key Reporter

"Self-proclaimed bibliophile Basbanes proves a delightful and intrepid guide in this capacious history of paper. As the author quickly discovered, paper is more than merely a surface for print; it is an indispensible product with connections to war (paper cartridges changed 17th-century firearms), health (tissues, toilet paper and disposable bandages) and politics (printed documents were central to the Stamp Act, Watergate, and countless other laws and scandals). Just as we are “awash in a world of paper,” Basbanes writes, “we are awash in a world of paper clichés”: “a house of cards,” a “paper thin margin,” “a tissue of lies,” “pulp fiction,” etc. Identity is confirmed by showing one’s “papers,” and we ascertain truth by comparing whatever is “on paper” to reality. Basbanes’ research took him around the world: to China, where papermaking first began nearly 2,000 years ago; Japan, where artisans still practice traditional methods; and across America, including the Crane Paper mill, manufacturers of paper for all American currency, the Kimberly-Clark company, which took their World War I overstock of cotton surgical dressings and invented Kotex, and publishing-stock maker P.H. Glatfelter, which is countering the rise of the e-book by providing paper for postage stamps, Hallmark cards and tea bags. Central to Basbanes’ history are people—artists, crafters, curators, librarians, origami makers, writers and recipients of letters—and surprising revelations. In 14th-century Europe, for example, the invention of the spinning wheel led to an increase in linen production, which led to an increase in rags, which lowered the price of paper, which caused Johannes Gutenberg to see that investing in mechanical printing would be a good idea. Only several hundred years later was paper more cheaply made from wood pulp. As his impressive bibliography and notes section suggest, Basbanes has investigated seemingly every detail of paper’s 2,000-year history. A lively tale told with wit and vigor." — Kirkus Reviews (starred review)

"A prodigious and endlessly fascinating tome, On Paper, which has been shortlisted for the American Library Association's Andrew Carnegie Medal for Excellence in Nonfiction, can be read either as a single work or nibbled on over time like a Whitman's Sampler. Even if Basbanes were not the accomplished writer of books on books that he is, this new work could sustain itself on the endless parade of conversation-starter tidbits…. This is the genius of the book. It is a meditation on the essence of paper that pushes readers to consider paper in ways that most of us never have. The chapter called 'Hard Copy' exemplifies the rewards of the approach. In it, Basbanes looks at how the concept of proving something happened means finding the paperwork.... As a storyteller, he follows his observation with riveting documentary tales…. As one approaches the end of On Paper, having learned of its history, its varied and seemingly endless uses, and its cultural, intellectual, and economic importance, among other considerations, Basbanes produces a masterful bit of reporting reflective of his years as an investigative journalist. Retaining his focus on paper, Basbanes provides a fresh view of perhaps the most reported story of this century, Sept. 11. To say more would spoil the end of the book." — James McGrath Morris, Santa Fe New Mexican

"Journalist and unapologetic bibliophile Basbanes sets out to explore the nature of paper and returns with an absolutely fascinating tale. Told in an engaging, accessible manner, his coverage of the topic is a wide-ranging, freewheeling, authoritative look at one of society’s most ubiquitous products, from its origins in China nearly two millennia ago through its methodical spread across the world. Basbanes digs into the means by which paper is made and recycled, manufactured and repackaged, created for mass consumption and manipulated as art. He examines the implications of its cultural uses—in historical documents, architectural drawings, government paperwork, currency—and in doing so reveals how many roles, directly and indirectly, paper plays in our lives. Basbanes leaves no page unturned, and finishes with a poignant story of how a paper trail keeps the legacy of 9/11 fresh and has led to the further identification of some victims. Through interviews, personal visits, and extensive research, he has created an engrossing, essential book that no book lover should be without. The wealth of information Basbanes includes barely scratches the surface, but it whets the appetite and forces us to rethink how we view this versatile material." — Publishers Weekly (starred review)

"Basbanes has produced a significant treatment of paper as a phenomenon…. The book is a pleasant, personal survey and travelogue treating the history of paper—its invention, production, and travel through centuries, common and special uses, and current resurgence of its role in society…. The author's skill ties all this together in a way that keeps the reader reading…. Highly recommended." — Choice

"Books on supposedly prosaic commodities that reveal, on examination, a fascinating history and endless significance—salt, coal, cod fish—are almost a sub-genre of non-fiction. Among the very best of this sort of book is On Paper by 'self-confessed bibliophiliac' Nicholas A. Basbanes. Basbanes, a Massachusetts-based journalist, whose previous works include A Gentle Madness, about that species of bibliophiliacs known as book collectors, has poured his heart and soul into this splendid survey of a beautiful human invention." — Philip Marchand, National Post

"Having given us a much-loved trilogy of books about books—A Gentle Madness, Patience and Fortitude, and A Splendor of Letters—Basbanes has written a thoroughgoing chronicle about the stuff books are traditionally made of: paper. He starts with its invention in China 1800 years ago, considers its use for everything from currency to the blueprints that facilitated the Industrial Revolution, and records a visit to the National Security Agency, where 100 million secret documents have been pulped and recycled as pizza boxes. Pretty much irresistible." — Barbara Hoffert, Library Journal

"This is a wonderful, fascinating and timely book on a subject some have prematurely declared obsolete. Basbanes reminds us of the vital role the invention of paper has played through the centuries in the dissemination of knowledge and ideas. His stories that run the gamut, from the way paper is made to a poignant sheet of paper floating down to the sidewalk on September 11, 2001. Not to be missed." — Meryle Secrest

"Nicholas Basbanes’s On Paper is an exhaustive but engaging survey of the history of a beautiful human artefact." — Philip Marchand, National Post (Canada) "Favourite Books of 2013"