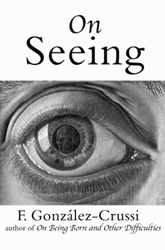 "What Oliver Sacks does for the mind, González-Crussi does for the eye in this captivating set of philosophical meditations on the relationship between the viewer and the viewed. The author, amused and amazed by our desire to see what is forbidden, draws on historical and cultural examples, from Actaeon spying on the goddess Diana to a pair of voyeurs in revolutionary France who unwittingly incite a massacre. Mixed in with such accounts are personal reflections drawn from medicine (González-Crussi is professor emeritus of pathology at Northwestern's medical school). He is astounded, for example, at how many people have pestered him for access to an autopsy, just to say they'd seen one. The ornate sentences are filled with stunning images, like his description of an infant just emerged from the womb, bloody, flailing his arms, and crying, appearing to the author not as a symbol of life but as resembling 'a foot-soldier in a defeated army, a pitiful survivor in a catastrophic retreat,' and his prose never loses its elegance, even when the stories he tells veer into the bawdy.... González-Crussi is a charming raconteur who will win over readers with his thoughts on our visual connection to the world around us. " — Publishers Weekly (starred review)

"Gonzalez-Crussi's ON BEING BORN AND OTHER DIFFICULTIES was much concerned with different ways of thinking. This book is concerned with different ways of seeing. Seeing with male prurience in the opening chapter, which begins with an incident during the second Bastille Day ceremonies in 1791, when ‘the number of fatuous and inane men living in Paris had reached an all-time high.’ Then seeing with the tribal eye, seeing preferentially either outside or inside of the body for medical purposes, seeing for the sake of anarchy and sensation and for that of tranquility and salvation, the physics of seeing, prejudicial and opinionated seeing, three distinct kinds of seeing in a mirror, blurred vision in Renaissance French literature, and finally, seeing with the clinician's eye. González-Crussi characteristically brings literary as well as medical knowledge to bear on each kind or facet of seeing, successfully demonstrating that each is a distinct phenomenon and again providing the kind of deep, slow, cultivated reading pleasure that pretty much only he affords." — Booklist