On the Origins of War and the Preservation of Peace 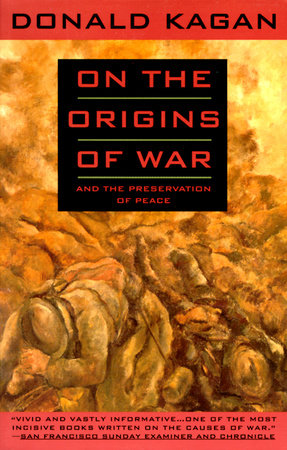 This book codifies one of the most popular courses given at Yale University over the last quarter century, taught by Professor of History, Classics and Western Civilization Donald Kagan. It brilliantly compares major wars from the Greek and Roman times, the two World Wars, the Cuban Missile Crisis, and several critical periods of peace. How and why wars begin, how they can be prevented, and the importance of military preparedness and political leadership, are examined in detail — with important and cautionary lessons for the leaders of tomorrow.

"Whenever a prestigious professor distills a lifetime of erudition into a single volume, it is a significant intellectual event. An expert on Greco-Roman political history at Yale, whose eminent four-volume history of the Peloponnesian War is unmatched but by that of Thucydides himself, Kagan here refines his thoughts on hostility between world powers in five case studies: the Athens-Sparta war, the Second Punic War, World Wars I and II, and the world war that wasn't — the Cuban missile crisis. As causal factors, Kagan emphasizes the 'Thucydidean triad' of honor, fear, and interest.... An incisive series of stimulating studies." — Booklist

"Vivid and vastly informative.... One of the most incisive books written on the causes of war." — San Francisco Sunday Examiner and Chronicle

"Lucid, erudite ...ambitious ...[by] one the most renowned classical scholars of this century.... a remarkable study in historical juxtaposition and analogy. Mr. Kagan's undertaking is valuable and compelling because it distills so much history into so clear and transparent a liquid." — Richard Bernstein, The New York Times

"By examining the causes of specific ancient and modern wars, Kagan tries to determine the underlying reasons for war in general.... He presents a soberly realistic, thoughtful, and well-written look at the human race's oldest scourge. " — Kirkus Reviews