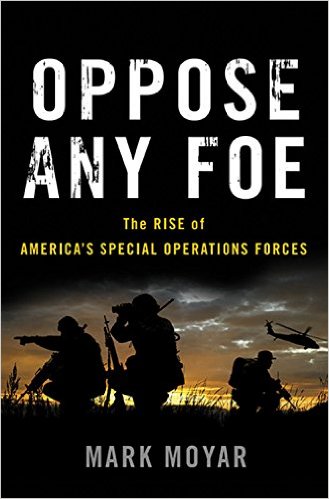 Mark Moyar, an acclaimed military historian, charts the rocky history of the America's Special Operations Forces, highlighting both the heroism of America's finest soldiers and the strategic limits of special operations.

Oppose Any Foe is the epic story of America's most elite warriors: the Special Operations Forces. Weaving together their triumphs and tribulations, Moyar introduces a colorful cast of military men, brimming with exceptional talent, courage and selflessness.

Presidents from Roosevelt to Obama have enthusiastically championed Special Operations Forces, although their enthusiasm has often surpassed their understanding of the limitations of these groups. Lacking clearly defined missions, Special Operations Forces have had to reinvent themselves time and again to prove their value in the face of fierce critics—many of them from the conventional military, which from the start opposed the segregation of talent and resources in distinct units. The first comprehensive history of these elite warriors and their courageous missions, Oppose Any Foe is fascinating reading for anyone interested in America's military history—and the future of warfare.

A main selection of the Military Book Club

"There are indeed many historical instances of special operations forces accomplishing astonishingly difficult, daring and successful raids. Nevertheless, Mark Moyar in his new book Oppose Any Foe: The Rise of America’s Special Operations Forces, gives us a stark reality check on the track record of success and effectiveness of these forces…. For the busy reader who requires an executive overview, Moyar provides excellent one-to two-page summaries at the end of each chapter. One reason to read the details, of course, is to become familiar with the myriad historical facts that inform Moyar’s conclusions. But the overriding reason to open the book at Page 1 and turn each one all the way to the end, is to get the full impact of the human story. For while this is a book about strategy, tactics, weapon systems, politics and policy, it is above all a story, or rather collection of stories, about the extraordinary individuals who have volunteered, trained, planned, executed, and bled for America and its allies in special operations. From the blue-blooded West Point valedictorian to the backwoods kid from West Virginia who lied about his age in order to enlist, and for whom Marine boot camp was the most comfortable and well-fed period of his life so far at the time, Moyar gives us countless portraits of exceptional, flawed, skilled, and above all courageous soldiers, sailors, and airmen…. When we learn how a soldier died in a battle, it’s not a cold, abstract statistic; we feel it in our gut and tears flow because we know him personally, even if only for a page…. Many books have been written about particular special operations services, units and/or missions. Oppose Any Foe purports to be the first comprehensive history of its kind, putting all of the others under its contextual umbrella. With few flaws, it succeeds brilliantly in presenting a sweeping 100,000-foot view all the way down to ground, dirt, sweat and blood level. A must-read." — Howard Hyde, The American Spectator  (Read the full review)

"Mark Moyar’s brilliant history of the United States’s Special Operations Forces (SOF), Oppose Any Foe, records their triumphs and failures. A theme running though the book is how presidents time and again have resorted to the SOF, fundamentally a tactical asset, as a magic solution to strategic problems, only to discard them when things don’t go as desired. Moyar draws some vital lessons on how to use them and, just as importantly, how not to." — Henrik Bering, Los Angeles Review of Books

"It will serve as an invaluable and highly readable overview of SOF’s history not just for those newly joining its ranks but also for anyone who seeks to know more about these glamorous and little-understood forces…. Given the extent to which the nation now relies on its special operators, it is imperative to better understand their background and culture. Moyar’s book is an excellent starting point." — National Review

"Moyar’s new look at the American military’s experience with special forces provides not only a condensed narrative history, but a deeper analysis of bureaucratic and budget fights; and the larger questions that persist on how these units fit into the strategic and operational environment of America’s recent military conflicts…. This volume provides a good overview of the genesis, history, and thorny relationship these elite units have had within the American military." — Jerry D. Lenaburg, New York Journal of Books

"Moyar turns a critical eye on the history of U.S. special forces, taking seriously the costs that developing such units imposes on the rest of the military, and taking account the strategic limitations of special operations. Moyar argues, among other things, that the glamor and undeniable heroism of special operators has helped deflect scrutiny of some of their more egregious failures, and of the special-operations enterprise as a whole." — Robert Farley, The National Interest

"A definitive account that reads like a well-crafted novel. Mark Moyar balances the audacity, egos, expertise, and mistakes that comprise the true history of America’s Special Operations Forces to produce a fascinating story that is as instructive as it is entertaining. A must read for current and future policymakers." — General (Ret.) Stan McChrystal, U.S. Army, Commander of Joint Special Operations, 2003-2008

"Oppose Any Foe: The Rise of America’s Special Operations Forces is a superbly researched, wonderfully readable account of the evolution of America’s Special Operations Forces, with very thoughtful—and thought-provoking—reflections on the employment of SOF in our recent wars. Oppose any Foe is, in particular, a fitting and timely tribute to the extraordinarily talented, courageous, and selfless Special Operators with whom I was privileged to serve in Iraq and Afghanistan." — General (Ret.) David Petraeus, Commander of U.S. and Coalition Forces

"Mark Moyar has written an important history of U.S. Special Operations Forces that eloquently records their recent rise in prominence. In this well-referenced and highly readable book, Moyar highlights the chronic challenges that Special Operations Forces have faced in working for conventional commanders and describes the limits of the military instrument in its current configuration in achieving U.S. foreign-policy objectives. He shows the need for fresh thinking on how America conducts its own irregular warfare activities and a better understanding by policymakers and their senior military advisors on what is possible through military force." — Lieutenant General (Ret.) Charles T. Cleveland, Commander of the U.S. Army Special Operations Command, 2012-2015

"This truly extraordinary book combines the scholarship of a profoundly impressive work of history with the white-knuckle tension of a thriller. The reader is naturally overawed with the sheer courage of the American Special Ops Forces, but also with the quality of their training, the depth of their professionalism, the acuity of their instincts, and the decency apparent in their innate modesty. Mark Moyar has done them, and us, a fine service in writing this groundbreaking book." — Andrew Roberts, Professor, War Studies Department, King's College, London

"It is exceptional to find a writer who has the diligence and depth of the careful scholar, with the skill to tell a rattling good tale-but Mark Moyar is that author. This is a masterly account of the rise of American Special Forces, a compelling account not just of the derring-do, but the Washington politics and organizational rivalries that went into forging the tip of the American armed forces' spear." — Eliot A. Cohen, Robert E. Osgood Professor of Strategic Studies, Johns Hopkins University

"Seeking to ‘confer historical understanding’ of America’s much-lauded yet poorly understood Special Operations Forces, Moyar, director of the Center for Military and Diplomatic History, chronicles 75 years of pyrotechnics while acknowledging the merits of some SOF criticism. Moyar opens by addressing certain persistent problems, including how SOF units suck talent from regular units, receive more training and expensive equipment, and often sit idle between missions (many of which could be accomplished by regular units). He proceeds by outlining the establishment of the various SOF units, beginning with the Army Rangers in 1942. Despite a few accomplishments, SOF units played an insignificant role in defeating the Axis, and hardly improved their standing during the Korean War, Vietnam, and the first Gulf War. Matters shifted significantly after the 9/11 terrorist attacks; units dropped into Afghanistan performed brilliantly in routing the Taliban and participated in the 2003 Iraq invasion. As those wars ground on, SOF prospered, seeming to offer a low-cost, low-casualty means of defeating insurgencies. Moyar maintains that this approach hasn’t worked and delivers the startling conclusion that expanding conventional forces is a better solution. Moyar admires these elite units, and his enthusiastic, warts-and-all approach to discussing Special Forces fireworks will surely raise some eyebrows." — Publishers Weekly