Pericles of Athens and the Birth of Democracy 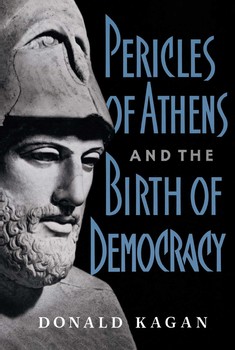 "Pericles is the greatest of subjects, Kagan the best qualified to write on him, his book wonderful reading." — C. Vann Woodward

"Masterly ...a concise introduction to the political life of Athens in its moment of greatest glory and greatest peril." — Commentary

"Kagan is well known for his four-volume history of the Peloponnesian War (The Outbreak of the Peloponnesian War; The Archidamian War; The Peace of Nicias and the Sicilian Expedition; The Fall of the Athenian Empire). His latest work is the first genuine biography of Pericles in English since A.R. Burn's Pericles and Athens (1949) and the most spirited defense of the Athenian democracy since W.G. Forrest's The Emergence of Greek Democracy (1966). The book is a lively and thoughtful chronicle of the years leading up to and into the great war between the Athenians and Spartans. Pericles is cast as the tragic hero whose flaw is the very rationality with which he so skillfully guided the Athenians and forged an empire. Contrary to the charges of both ancient and modern critics, Kagan argues that the democracy was a rational, deliberate, and moderate regime, and Pericles is portrayed as the consummate visionary political leader whose great mistake was to expect everyone to think and behave as rationally as he did. This learned and passionate book is sure to cause controversy." — Library Journal

"Kagan draws on ancient sources as if they were a phone call away, re-creating Pericles as a vibrant model for current democratic leaders." — Philadelphia Inquirer