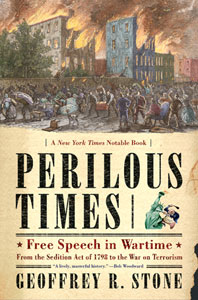 "As readers would hope from a book about free speech, this one is filled with glorious insults — the first man charged under the Sedition Act accused John Adams's administration of 'unbounded thirst for ridiculous pomp... and selfish avarice' — and lucid accounts of the speech that the U.S. government has tried to quiet throughout our history. A law professor at the University of Chicago, Stone delivers rich material in an engaging, character-based narrative. Stone offers deep insight into rhetorical history and the men and women who made it — resisters like Clement Vallandingham, Emma Goldman, Fred Korematsu and Daniel Ellsberg; presidents faced with wartime dilemmas; and the prosecutors, defenders and Supreme Court justices who shaped our understanding of the First Amendment today. His treatment of the war on terror is brief, and his assessment of the Bush administration is judicious but harsh for what he casts as its obsession with secrecy and its effective dismantling of the 1976 Levi guidelines restricting the FBI's ability to investigate political and religious activities. Stone places heavy responsibility on — and gives ample credit to — the American public for upholding free speech even when our leaders tend toward measures that weaken liberty in the name of strengthening it. Comprehensive and consistently readable, this enlightening book arrives at a time when national political debate should be at a fever pitch." — Publishers Weekly (starred review)

"Compellingly argue[d].... [A] timely and readable book.... [Stone's] informed and nuanced exploration of historical restrictions on wartime dissent and free speech are sobering and relevant to our current situation. PERILOUS TIMES has much to teach us today. Many of the matters he explores — particularly the political manipulation of fear and the consequences of unquestioned congressional and judicial deference to the wartime presidency — are relevant to our post-9/11 politics. This important book reminds us that open government, an independent judiciary and an informed and active citizenry are, at a minimum, a prerequisite for the preservation of liberty in times of conflict. If Stone's beliefs that we must foster a 'culture of civil liberties,' that Congress must take the Constitution 'more seriously' and that the executive branch should appoint defenders of civil liberties to its inner councils sound utopian, it is a sad indication of just how much of an uphill battle Stone and other champions of free speech and wartime dissent still have to fight." — Chicago Tribune

"However seductively it may be phrased, the offer of an exchange of liberty for security has a totalitarian hook sticking out of itts protectively colored bait. Societies that make the trade have very often ended up with neither liberty nor security. But on the other hand (as Fay Wray entitled her own memoir of monstrousness in New York) totalitarianism can present a much more menacing threat from without. I have heard serious people describe the reign of our pious present attorney general as fascistic. Given that jihadist armed forces could still be in our midst, that might be looking for fascism in all the wrong places. What this argument has long needed is the discipline of historical perspective, and Geoffrey R. Stone...has come forward at precisely the right moment with an imposing book that offers precisely that. In PERILOUS TIMES: Free Speech in Wartime from the Sedition Act of 1798 to the War on Terrorism, he shows how the United States has balanced (and unbalanced) the scale of freedom versus the exigencies of self-defense.... Completely absorbing.... One closes this admirable book more than ever determined that the authors of the Constitution were right the first time, and that the only amendment necessary might be a prohibition on the passage of any law within six months of any atrocity, foreign or domestic." — Christopher Hitchens, The New York Times Book Review

"It's hard to think of a scholarly study more timely than Geoffrey R. Stone's new book, PERILOUS TIMES.... A sagacious brief on the vital importance of the First Amendment and an illuminating history of the ongoing tension in American history between liberty and security.... [Stone] argues that if free speech is essential to self-governance in ordinary times, it is even more critical in wartime, as one of its chief functions is 'to help the nation make wise decisions about how to conduct the war' and 'whether its leaders are leading well.'... Stone...provides a visceral understanding of how First Amendment doctrine has evolved during the last two centuries. His narrative underscores the importance that the makeup of the Supreme Court has played in its deliberations over free speech, and the sometimes crucial role that individual presidents (along with their attorneys general) have played in urging restraint or in fueling anger at dissidents who have challenged their policies.... [H]e never loses sight of the big picture: he does a lucid job of tracing patterns that have recurred throughout American history in times of real or perceived crisis (again and again, the threat is inflated, the public's sense of patriotism is inflamed, the lines between disloyalty and dissent are blurred) and explicating the fallout that fear has had on the country's commitment to robust and uninhibited debate.... Eloquent.... Impassioned yet methodical.... Mr. Stone has written an important, indeed necessary, book on a freedom indispensable, as Justice Louis D. Brandeis put it, to 'the discovery and spread of political truth': the 'freedom to think as you will and to speak as you think." — Michiko Kakutani, The New York Times

"A lively, masterful history — and reminder — of the essential role of the First Amendment during the stresses of war." — Bob Woodward

"A majestic work about democracy under seige... [It offers] a valuable reminder of why we should never take this historic freedom for granted." — The Judges of the Los Angeles Times Book Prize

"Engrossing.... Stone gives as much attention to the changing historical settings as to the legal and constitutional developments that grew from them. To read PERILOUS TIMES is to be confronted with the powerful social, cultural, and institutional barriers to the protection of civil liberties in wartime.... This is a book whose discerning legal and constitutional analysis, clear prose, and humane outlook deserve the highest praise." — Edmund S. Morris & Marie Morris, New York Review of Books

"On July 4, 1951, at the height of Cold War tensions, a reporter asked 112 people in a park in Madison, Wisconsin, to sign a petition containing nothing more than quotations from the Declaration of Independence and the Bill of Rights. All but one refused. Bitter ironies like this abound in PERILOUS TIMES, Geoffrey R. Stone's masterful history of free speech in wartime America. With clarity, moderation and some 2,000 footnotes, Stone explains how Americans could come to fear their own founding documents. We have long needed this book, though perhaps never as badly as we do today.... Stone provides a Profiles in Courage for the Sept. 11th generation." — Washington Post Book World

"PERILOUS TIMES is magisterial, timely, and wise; it is also filled with gripping and sometimes amazing stories from our nation's turbulent history. By placing a spotlight on restrictions of freedom amidst war, Stone has done an extraordinary public service — and produced a classic in the process." — Cass Sunstein, Karl N. Llewellyn Distinguished Service Professor of Jurisprudence, University of Chicago Law School

"Rarely has a work been more timely than PERILOUS TIMES. Citing chapter and verse, Geoffrey Stone has provided in plain Americanese the history of Acts endangering our fundamental rights. Covering the bloodied turf from the Alien and Sedition Actos of 1798 to the current U.S.A. Patriot Act, this book is must reading for every citizen interested in something called the First Amendment." — Studs Terkel

"So rich in material is PERILOUS TIMES, a chronicle of the tribulations of the 1st Amendment in wartime, that this scholarly yet highly readable book amounts to an anecdotal history of the United States itself, from the Founding Fathers to the present. Its author, Geoffrey R. Stone, a law professor at the University of Chicago and one of our foremost scholars on constitutional law, has written, with knowing passion, a cautionary tale for our times." — Herbert Mitgang, Los Angeles Times

"Stone's history examines America's tendency in wartime to compromise First Amendment rights in the name of national security. During the Civil War, a former congressman, Clement Vanlandigham, was imprisoned and nearly executed for objecting to the conflict as 'wicked, cruel, and unnecessary'; in the First World War the anarchist Mollie Steimer was sentenced to fifteen years for calling capitalism the 'only one enemy of the workers of the world.' Each of these measures seemed essential to victory at the time; later, however, pardons were issued. We may one day feel the same about Guantánamo and the Patriot Act, but not all wrongs are immediately remedied. In 1971, Attorney General John Mitchell tried to use the contentious Espionage Act of 1917 (which, largely forgotten, had never been revoked) to prevent the publication of the Pentagon Papers. It is still law today." — The New Yorker

"To help us grope our way through the perilous present, Geoffrey R. Stone, a leading authority on the First Amendment, has produced a rich and readable overview of America's curtailment of civil liberties in wartime.... Engrossing.... [Stone's] real contribution to the study of the ongoing war on terror is this book as a whole. For each episode, as Stone retells it, speaks in one way or another to the painful issues of the present day.... Illuminating.... An important reality check.... Stone's admirable history strongly suggests that, in practice, the United States does indeed have one constitution for peace and another for war.... By chronicling the most serious historical deviations from our ordinary constitutional order...Stone's outstanding book alarms as much as it clarifies." — The New Republic

"With deep insight, uncanny analytic power, and extraordinary intelligence, Geoffrey Stone takes us on a fascinating journey through American history — through successive battles in times of national emergencies that pitted perceived needs for heightened national security against the efforts to preserve our most cherished civil liberties. This is great, dramatic, and absorbing legal history at its best — beautifully written, highly accessible, and critically important for our time." — Jonathan Cole, Provost & Dean of Faculties, Columbia University