A History of the Tropical and Temperate Zones 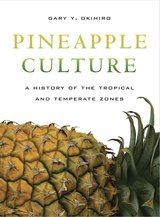 Plucked from tropical America, the pineapple was brought to European tables and hothouses before it was conveyed back to the tropics, where it came to dominate U.S. and world markets. Gary Okihiro's PINEAPPLE CULTURE is a dazzling history of the world's tropical and temperate zones told through the pineapple's illustrative career. The transit of the pineapple brilliantly illuminates the history and geography of empires—their creations and accumulations; the circuits of knowledge, capital, labor, goods, and the cultures that characterize them; and their assumed power to name, classify, and rule over alien lands, peoples, and resources. Like his enthusiastically received ISLAND WORLD, this book upends conventional ideas about history, space, and time through its provocative vision.

"Few other images convey the nature of the tropics as effectively as the pineapple, yet this now-commonplace fruit was once a much-sought-after rarity, one that signified elegance and hospitality while it simultaneously destroyed cultures and launched empires. Continuing the eclectic cultural history of the Hawaiian Islands he began in ISLAND WORLD, Okihiro traces the impact this one commodity has exerted throughout time and around the globe, aided by the vagaries of geography, ambitions of governments, heroics of explorers, and vanities of businessmen. Though he focuses on the predominance of James Dole’s Hawaiian Pineapple Company, Okihiro also constructs a thorough time line for the pineapple’s rise to influence and acceptance that ranges from the species’ genesis in a remote corner of South America, to its temptation of European botanists and its unwitting role in the overthrow of Hawaii’s royal government. Seamlessly fusing geography with anthropology, horticulture with international politics, Okihiro draws a comprehensive portrait of how a singular fruit can unite a world." — Booklist