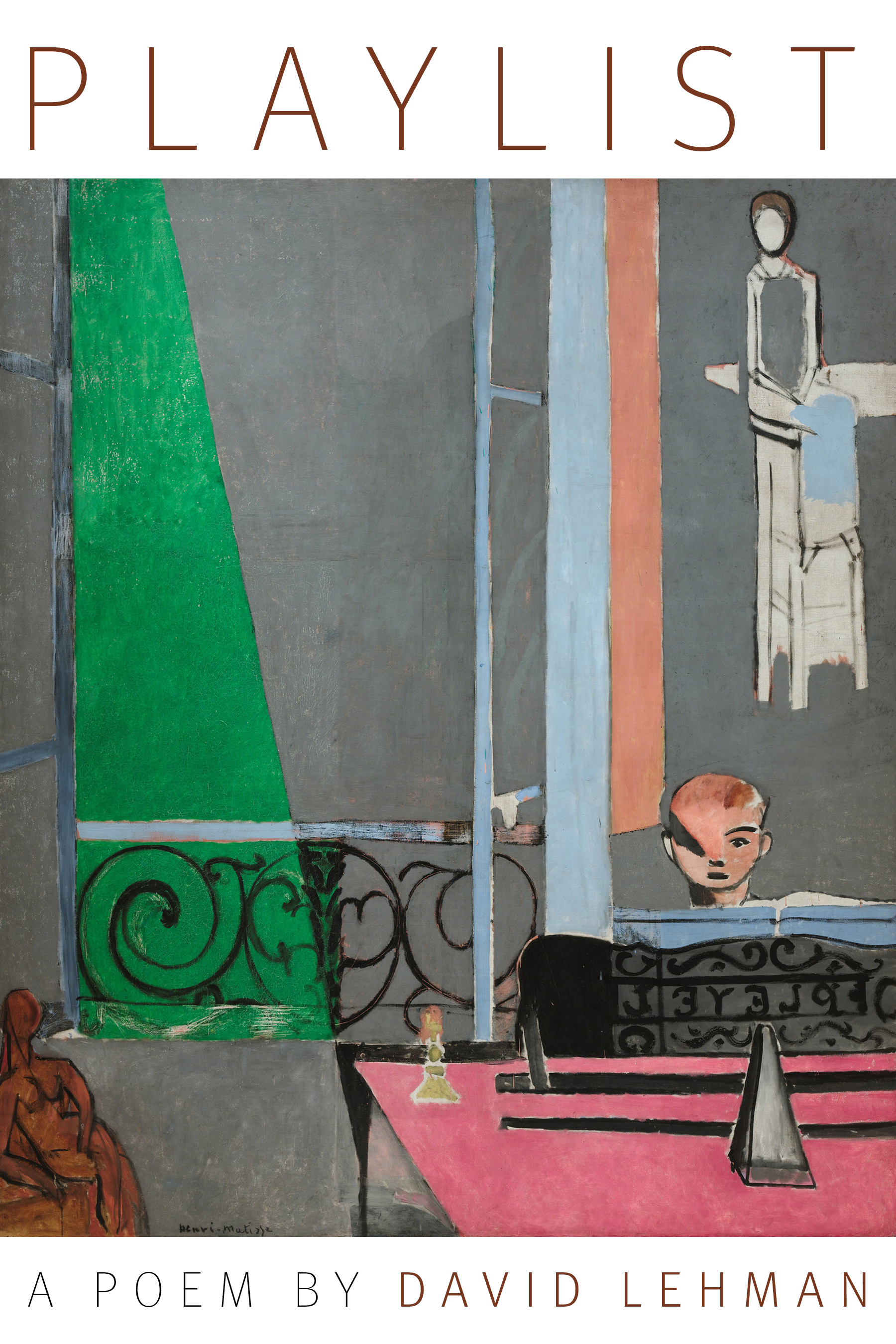 "Lehman, already at the forefront of our literary culture, writes a music retrospective inspired by his friend, the late great poet A.R. Ammons. In 1965, Ammons’ book Tape for the Turn of the Year premiered poems written on a cash-register tape. In these, he gave us permission “to say and do anything.” And so, Lehman does—chronicling jazz icons of the 40s 50s 60s—as well as film/TV stars. This book will break your heart for all that’s passed, and especially how tenderly Lehman revives it. By identifying song and singer, Lehman traces this country’s cultural story and tells us what the past is worth, and why. And this is where you fall in love…the poet’s personal involvement…where he was the night of…what he was drinking…how he felt…not reminiscences, nothing so cheap as that, but actual shards piecing his own life together through music, day by calendar day. What is the central issue of any book-length poem? With Ammons, it was claiming his right as poet. With Lehman, it’s a true devotion to the meaning and spirit of that great human endeavor, jazz—as well as classic pop culture. Lehman is knowledgeable about music’s traditional story, and he takes it out of the corner, away from music connoisseurs, to animate it for all readers. The passion and strength of the poet shape stories of singers and musicians, at times making song out of words. The writing fluidly connects 72 pieces, and the accumulation demonstrates the soul of innovation: i.e., film and music now become poetry. A man, obedient to 'The Stars,' revels at the intricate beauty that’s given him such lifelong pleasure." — Grace Cavalieri, Maryland’s Poet Laureate., Washington Independent Review of Books

"Playlist was inspired by Tape for the Turn of the Year (1965), by A. R. Ammons (1926–2001), Lehman’s mentor and friend. Like Tape, it spans fall turning into winter, one poem per day—in this case—from November 20, 2017, to January 15, 2018. It’s based on the two poets’ shared tastes in song and symphony, which, for randomness’ sake, Lehman indulges via the radio while driving (Ammons didn’t need a radio 'because [he] had / a very entertaining mind'). The songs are Great American Songbook fare performed by Sinatra, Ella, Vic Damone, Doris Day, Peggy Lee, even 'Rod Stewart trying to sing Gershwin'—played by Basie, the Modern Jazz Quartet, Ellington, Sonny Rollins, Miles, and their peers. The symphonies (and chamber music) are by Brahms, Beethoven, Tchaikovsky, Mozart, Franck, and other worthies. Lesser, passing subjects include the weather, the word if, holiday football, the prison near the Tivoli Gardens, Dietrich and her top hat, and Hollywood movies, especially Hitchcock’s. But the music, including snatches of lyrics and the pathos of composers (Schubert, of course), fuels the trip—and what a trip." — Library Journal

"Reminiscent of his 2000 collection, The Daily Mirror, which is a kind of daily diary of poems, Playlist is also a collection of daily poems, these written from November 20, 2017, through January 15, 2018. But more so than the previous collection, these poems are conceived of as a single work, a single poem in homage to and an elegy for his friend, the poet A. R. Ammons ('Archie'). As in the previous collection, but perhaps with a greater emphasis, more in the foreground—as indicated by the title—jazz and classical music form a sort of soundtrack to his thoughts and impressions. Movies, the weather, and poets are also recurring themes in both works…. On top of an impressive knowledge of music and movies, though never in the form of 'lecture,' Playlist entertains and engages the reader and is a sweet accolade for a dear old friend." — Charles Rammelkamp, North of Oxford

"In a 1996 Paris Review interview with A.R. Ammons, David Lehman said that Ammons’ long poems: 'seem in some ways deliberately imperfect—casual, expansive, all-inclusive, loose.' The same could be said for Playlist, which is a direct homage to Ammons’ Tape for the Turn of the Year. Like many of Ammons’ long poems, Playlist unfolds in increments, held in place by the calendar and given momentum by the playlists on Sirius radio and by the enthusiasms of the poet—jazz, poetry, cinema, the great American songbook, and crooners like Sinatra. There’s a cosmopolitan sprezzatura to Lehman’s long-poem, a spritely dailiness, surprisingly intimate and lush, as open to chance as a turn of the stereo’s dial, efflorescing in descriptive passages.... In Playlist, Lehman has succeeded in doing something that hasn’t been done much since the passing of Ammons, viz., he’s written a book-length poem that is propulsive in its readability. Playlist is a testament to a literary friendship of the highest caliber, and an artifact from a life lived in a studied circadian dialogue with art, literature, and music. Anyone who lives poetry, and loves it, should read this book." — Dante Di Stefano

"Playlist is entirely wonderful. I'd meant just to take a quick glance and then to read it through with my afternoon tea. But once I began, I could not put it down . . . that hasn't happened to me since the passing of Schuyler. Really, it's splendid." — Donald Revell

"What a gorgeous and ambitious poem this is—an elegy, a calendar, an enactment of beauty, a tribute to singers and musicians and those who love them, a musical compilation, a meditation on friendship and art, an evocation of hopefulness and the possibility of enhanced life, a summoning…." — Lee Upton

"As full of light as of music. A prodigious display of musical erudition, offered to the reader with playfulness rather than pretension." — Terence Winch