Poems in the Manner Of 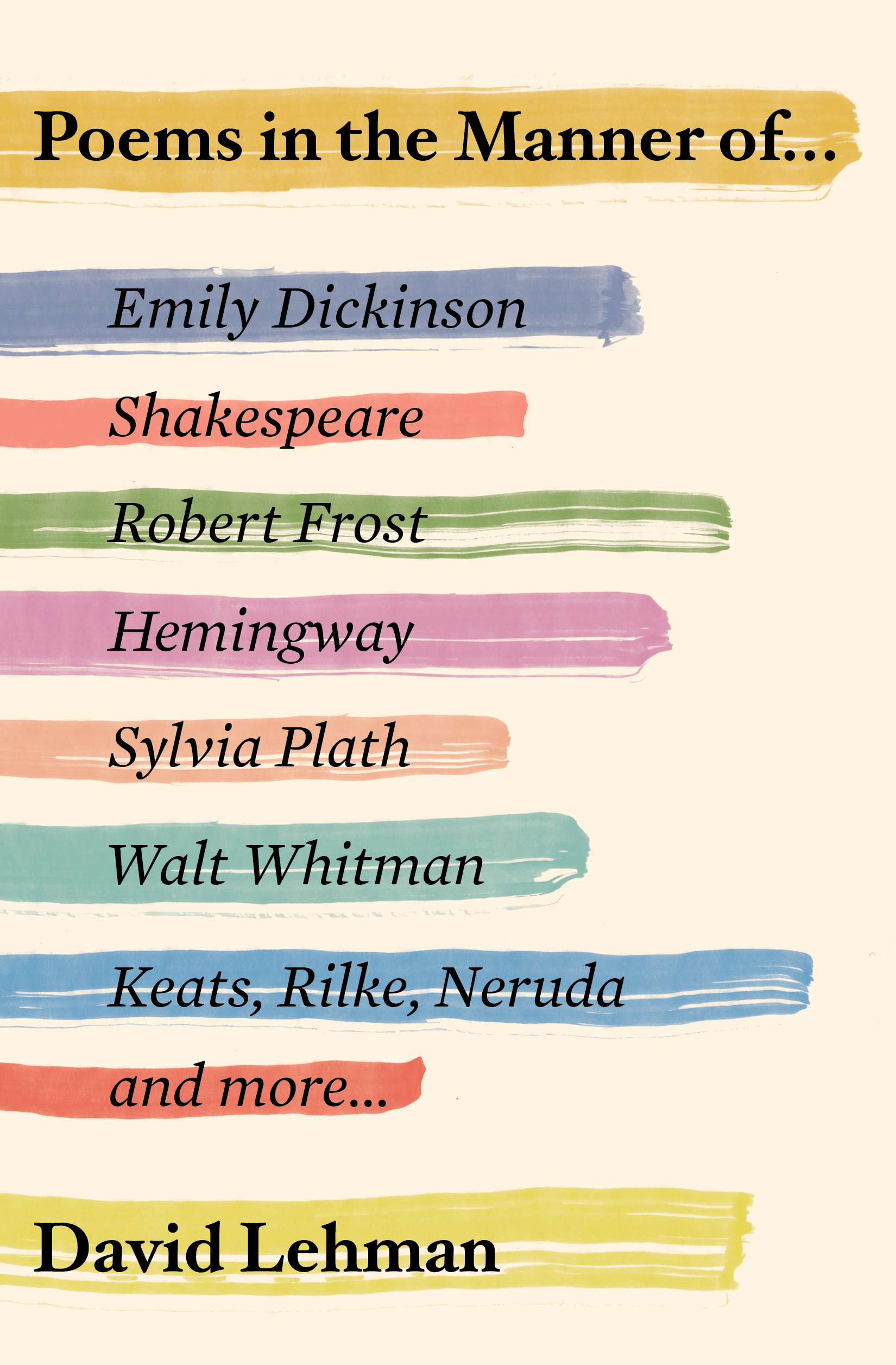 Poems in the Manner Of is an illuminating journey through centuries of writers who continue to influence new work today, including that of respected poet and series editor of The Best American Poetry David Lehman.

Lehman has been writing “poems in the manner of” for years, in homage to the poems and people that have left an impression, experimenting with styles and voices that have lingered in his mind. Finally, he has gathered these pieces, creating a striking book of poems that channels poets from Walt Whitman to Sylvia Plath and also calls upon jazz standards, Freudian questionnaires, and astrological profiles for inspiration.

Intelligent and sparkling, this is a great gift for poetry fans and a useful resource for creative writers. These are poems of wit and humor but also deep emotion and clear intelligence, informed by Lehman’s genuine and knowledgeable love of poetry and literature. From Catullus and Lady Murasaki to Wordsworth, Neruda, Virginia Woolf, W.H. Auden, and Charles Bukowski, Poems in the Manner Of shows how much life there is in poets of the past. Whether you’re reading for pure enjoyment or examining how a poet can use references and influences in their own work, Poems in the Manner Of is a treasure trove of literary pleasures and food for thought.

A sample of the book:

Over the hills
Comes the quiet.
Across the treetops
No breeze blows.
Not a sound: even the small
Birds in the woods are quiet.
Just wait: soon you
Will be quiet, too.

"There are two ways to look at this strange book of poetry, which 'channels' poets from Catullus to Joe Brainard. If you’re not convinced that Lehman can imitate any poet you can name, at the end of the book, just for good measure, he includes his satirical lyrics for songs by Bob Dylan, Lorenz Hart and Irving Berlin, and Harold Arlen and Johnny Mercer. Lehman can parody anyone, with aplomb and humor. Here’s his tribute / goof on Basho’s famous haiku: 'Pond / Frog / Splash.' So, on the one hand, the book is a display of brilliance. But on the other hand, it wonderfully illustrates where contemporary American poetry is — driving forward by looking in the rear-view mirror. This book implies that the best poetry is behind us. The new and improved poets who have rose petals tossed at them by critics for their shockingly new and improved poetry pale in comparison to the poets listed on the front cover of Lehman’s book: Emily Dickinson, William Shakespeare, Robert Frost, Ernest Hemingway, Sylvia Plath, Pablo Neruda. OK, Ernest Hemingway not so much. Damn you, David Lehman. You’ve left me elated and depressed." — Inspector Watt, Caesura Magazine

"David Lehman’s Poems in the Manner Of… takes me back to that youthful state of stumbling upon Kafka or Rilke or Lady Murasaki for the first time and hearing a singular voice beam across centuries, languages, oceans. The collection is an autobiography in reading, an extended love letter to literature, and a series of tributes by ostensible imitation, with translations in the mix. But these poems aren’t imitations; they are Lehman poems that not only embrace their influences, they take up residence in them and seize their own voice by harnessing another. Its elasticity is a kind of miracle. At moments I forget that I’m reading a “poem in the manner of” rather than the poet whose manner is being borrowed. The poems can be hilarious; they can also be poignant reminders that time moves in only one direction. The miracle is that what unfolds from the collection is double: brief introductions (and sometimes the poems themselves) bring you into Lehman’s life, with poets and writers as the soundtrack to each era, and while you join him on his journey, a parallel track in your head opens up your own story. You don’t have to be as voluminously well-read as Lehman to connect; the poems open the door to learning as well as memory, and they’re an affirmation—in a time when many writers can’t write—that reading can be a form of writing." — Adrienne Su, The Common

"A brilliant book, quite obviously. But in its own way, it is, in many of its pieces, a great one." — Jeff Simon, The Buffalo News, "Editor's Choice"

"Since 2002, poet and Best American Poetry series editor Lehman has been writing poems in honor of and in stylistic homage to other poets and literary figures. With a great sense of play, he has created poems that take the reader chronologically through his artistic influences. Many of these poems are humorous, some tongue-in-cheek in approach, but all are grounded in Lehman’s extensive knowledge of poetry and his deep understanding of form and tradition. Although a few poems, including those meant to echo Dickinson and Woolf, fall flat, others, including tributes to Catullus and Plath, ring true. Lehman’s 'astrological profiles' of Hamlet and Keats are at once original, witty, and downright brilliant. His centos (literary works made up of quotations from other works) are also clever and should inspire writers to undertake similar experimentation. Lehman’s 'in the manner of' collection would be a fun component in both the study and teaching of poetry. It can also serve as an excellent springboard for poets who want to explore and improvise on their own influences." — Janet St. John, Booklist

"In 2002, David Lehman began an intriguing exercise: to write poems that both honored and mimicked the works of his favorite poets. Lehman’s choices were wide—ranging from Wordsworth, Whitman and Keats to Gwendolyn Brooks, Charles Bukowski and Bob Dylan. His approximations also paid homage to cultural icons, including Marilyn Monroe and the Brooklyn Bridge. Together in one volume, Poems in the Manner Of, these works read like an eclectic course in major poets and poetic movements. Lehman, who founded and is the series editor of Best American Poetry, introduces each ‘poem in the manner of’ with notes about the subject’s style and approach, or about what he tried to achieve with his rendition. The strongest work captures the spirit of the original yet also stands on its own merits, as with ‘Poem in the manner of Basho: Pond/ Frog/ Splash’ or with the lovely translation of Goethe’s ‘Wandrers Nachtlied,’ which begins with quiet coming across the treetops and ends with ‘Just wait; soon you/ Will be quiet, too.’ As the collection continues, readers see how modeling one’s writing after the masters can lead to fascinating discoveries and extend one’s own poetic range." — Elizabeth Lund, The Washington Post, “Best Poetry Collections—to Inspire, Challenge and Spark the Imagination”

"Though the conceit might seem cute, Lehman brings his expert eye and deep knowledge of the writers he mimics to save this collection from feeling like a mere workshop exercise. As Lehman writes in his introduction, the work embraces ‘homage, parody, imitation, and appropriation, or combinations of these four things.’ Spanning Catullus to Joe Brainard, and employing the art of ekphrasis as much as imitation, Lehman succeeds in the task he sets for himself. These renderings are a record of poetic engagement, a sort of autobiography of what has moved the author as well as a moving summary of the author’s own development. It is hard to use the term speaker here, as Lehman so readily inserts himself at the outset of every piece, offering a small anecdote as to why he has chosen this particular poet or manner to imitate. He offers disparate justifications for his choices, recalling his father, a refugee from Nazi Germany, reciting Goethe to him, and declaring that ‘I like emulating Frank O’Hara.’ Therein lies the charm of this book: Lehman’s blend of whimsy and gravitas, his ability to find pleasure in almost anything while still plumbing its depths." — Publishers Weekly

"The editor of the Best American Poetry series offers an homage to his inspirations, channeling poets from Walt Whitman to Sylvia Plath and also calling upon jazz standards, Freudian questionnaires, and even astrological profiles." — Publishers Weekly