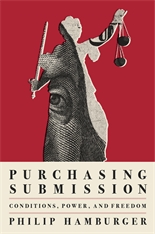 Philip Hamburger has written a momentous study of a powerful mode of government control: the offer of money and other privileges to secure submission to unconstitutional power.

The federal government increasingly regulates by using money and other benefits to induce private parties and states to submit to its conditions. It thereby enjoys a formidable power, which sidesteps a wide range of constitutional and political limits.

Conditions are conventionally understood as a somewhat technical problem of “unconstitutional conditions”—those that threaten constitutional rights—but at stake is something much broader and more interesting. With a growing ability to offer vast sums of money and invaluable privileges such as licenses and reduced sentences, the federal government increasingly regulates by placing conditions on its generosity. In this way, it departs not only from the Constitution’s rights but also from its avenues of binding power, thereby securing submission to conditions that regulate, that defeat state laws, that commandeer and reconfigure state governments, that extort, and even that turn private and state institutions into regulatory agents.

The problem is expansive, including almost the full range of governance. Conditions need to be recognized as a new mode of power—an irregular pathway—by which government induces Americans to submit to a wide range of unconstitutional arrangements.

Purchasing Submission is the first book to recognize this problem. It explores the danger in depth and suggests how it can be redressed with familiar and practicable legal tools.

“A must-read for scholars concerned with government overreach.”

"Hamburger explores federally mandated 'conditions'—that is to say, requirements imposed by the U.S. government on people and organizations in exchange for funding or other privileges. Such conditions include, for instance, requiring states to set a minimum drinking age of 21 to receive highway funding; requiring university research involving human subjects to be approved by institutional review boards; and prohibiting organizations that have 501(c)(3) tax status from political campaigning. Hamburger argues that these conditions violate constitutional rights, with little to no recourse for Americans.... Hamburger clearly and convincingly describes the problem and its impact.... A must-read for scholars concerned with government overreach and constitutional scholarship." — Sarah Schroeder, Library Journal

"A damning indictment of the administrative state.... Hamburger has written an incisive and thorough book on the federal government’s campaign to impose an Orwellian dystopian and totalitarian regime on the populace." — John Dale Dunn, American Thinker

"Hamburger has done admirable service excavating and exploring the ways in which purportedly voluntary concessions are a means of extending government power and control. If this book does nothing but enhance our collective vigilance to the danger of purchased submission, it will have performed an essential service." — Jonathan H. Adler, National Review