How Outsized Ambition, Greed, and Corruption Led to Economic Armageddon 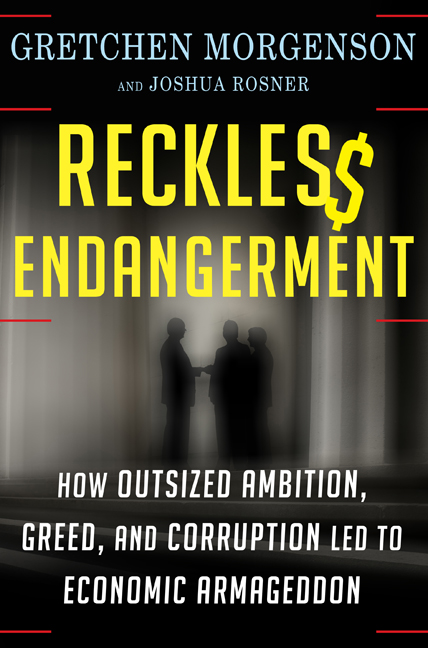 In Reckless Endangerment, Gretchen Morgenson, the Pulitzer Prize-winning business columnist of The New York Times, exposes how the watchdogs who were supposed to protect the country from financial harm were actually complicit in the actions that finally blew up the American economy.  Drawing on previously untapped sources and building on original research from co-author Joshua Rosner—who himself raised early warnings with the public and investors, and kept detailed records—she connects the dots that led to this fiasco, revealing how the financial meltdown emerged from the toxic interplay of Washington, Wall Street, and corrupt mortgage lenders.

Morgenson and Rosner draw back the curtain on Fannie Mae, the mortgage-finance giant that grew, with the support of the Clinton administration, through the 1990s, becoming a major opponent of government oversight even as it was benefiting from public subsidies. They expose the role played not only by Fannie Mae executives but also by enablers at Countrywide Financial, Goldman Sachs, the Federal Reserve, HUD, Congress, the FDIC, and the biggest players on Wall Street, to show how greed, aggression, and fear led countless officials to ignore warning signs of an imminent disaster.

Character-rich and definitive in its analysis, this is a compelling and authoritative account of the financial crisis.

"Gretchen Morgenson, a veteran New York Times reporter, and Joshua Rosner, a consultant, join up the dots between Congress, special-interest groups, government-sponsored enterprises and Wall Street, including many that other books failed to link, and provide the best account yet of how the American mortgage system went off the rails." — "Best Books of the Year", The Economist

"Q: On a more personal note, what one book you would recommend to someone who wanted to understand today’s economy? A: Well, it’s hard to limit myself to just one. I always recommend Milton Friedman’s timeless classic Capitalism and Freedom. Another book I’ve been recommending lately isn’t so much about economics, but about regulatory capture or what we more commonly call crony capitalism—and that’s Reckless Endangerment by Gretchen Morgenson and Joshua Rosner. This is an area that is not well understood—but it’s especially important as we continue to debate the proper role of government in our economy…. This book takes us into an area where we know very little and need to know more." — From an interview with Stanford economist John B. Taylor

"Occupy Wall Street makes an economic critique that echoes the president’s, though more bluntly: the rich are bad, down with the elites. It’s all ad hoc, more poetry slam than platform. Too bad it’s not serious in its substance. There’s a lot to rebel against, to want to throw off. If they want to make a serious economic and political critique, they should make the one Gretchen Morgenson and Joshua Rosner make in Reckless Endangerment: that real elites in Washington rigged the system for themselves and their friends, became rich and powerful, caused the great catering, and then ‘slipped quietly from the scene.’ It is a blow-by-blow recounting of how politicians—Democrats and Republicans—passed the laws that encouraged the banks to make the loans that would never be repaid, and that would result in your lost job…. The story is a scandal, and the book should be the bible of Occupy Wall Street. But they seem as incapable of seeing government as part of the problem as Republicans seem of seeing business as part of the problem." — Peggy Noonan, The Wall Street Journal

"In Reckless Endangerment, Gretchen Morgenson, a veteran New York Times reporter, and Joshua Rosner, a consultant, provide the best account yet of how this system went off the rails. So successful have the pair been at ferreting out the details that the book is at the top of Amazon's worldwide bestseller list…. Reckless Endangerment may be the umpteenth book on the crisis, but it sheds much new light on its causes." — The Economist

"Reckless Endangerment concentrates on particular individuals who played key roles. The authors deftly trace the beginnings of the collapse to the mid-1990s, when the Clinton administration called for a partnership between the private sector and Fannie and Freddie to encourage home buying…. Morgenson and Rosner offer telling details,… The authors are at their best demonstrating how the revolving door between Wall Street and Washington facilitated the charade." — Robert B. Reich, The New York Times Book Review

"Americans who read this outstanding history of the financial crisis will know, by the end, exactly who created the meltdown of 2008 and how they did it." — James Freeman, The Wall Street Journal

"Though many observers have asserted that Fannie Mae and government meddling caused the disaster, this fast-paced, original narrative comes closest to making the case…. Written in a smooth blend of hard reporting and lucid analysis, Reckless Endangerment crackles with indignation and telling anecdotes." — James Pressley, Bloomberg News

"Respected journalist Morgenson and financial/policy analyst Rosner set out to investigate the financial crisis of 2008: ‘how such a thing could happen in America in the new millennium.’ They name those involved, how they did it, and why. We learn about self-interested and politically influential people, particularly in Washington and on Wall Street as well as those who tried in vain to warn of the impending crisis but were squashed or ignored. Originating with the 1994 directive to expand home ownership among Americans, the authors paint a picture of unintended consequences, of greed, good intentions, and corruption; they report lies involving politicians, corporate executives, bankers, and borrowers, laxity by most regulators, and the disappointing role of credit-rating agencies. Morgenson and Rosner base this book on interviews and conversations conducted on parallel paths, beginning in the mid-1990s, and a wide range of secondary sources. This excellent, thought-provoking book is a ‘must read’." — Booklist

"Even before Reckless Endangerment, Gretchen Morgenson was my nominee for Reporter of the Decade for her forensic and prophetic coverage of Wall Street. Now, she and the equally talented sleuth Joshua Rosner, like Holmes and Dr. Watson, have pieced together the clues to a seminal mystery of the financial debacle: how American taxpayers were suckered by the shenanigans, greed, egos, backscratching, and guile of financial and political elites who swarmed like vultures around Fannie Mae, picking it clean of oversight and accountability while its executives gorged themselves on the spoils. Naming names and taking no prisoners, they drill deep into one of the most disturbing scandals of our time, perpetrated in the name of helping 'the little guy.' Read it and weep. Read it and vow: Never Again!" — Bill Moyers, President, Schumann Media Center

"Gretchen Morgenson is a national treasure. Year after year, she has dragged Wall Street miscreants out of the shadows, exposing their dirty secrets to the public that they bamboozled with schemes and deceits. Now, working with Joshua Rosner, she has trained her expert eye on the mortgage mess that pushed the American economy to the brink. In stunning detail, Morgenson exposes the truth behind the worst financial calamity of modern times, weaving a tale that is as mesmerizing as it is horrifying. Reckless Endangerment names the names and reveals the secrets of the plutocrats and politicians whose greed and recklessness threatened the foundations of capitalism. It is essential reading for anyone struggling to understand how America entered the new era of financial chaos." — Kurt Eichenwald, author of Conspiracy of Fools and The Informant

"New York Times business correspondent Morgenson and investment consultant Rosner combine their expertise in a fresh look at the causes of the 2008 mortgage meltdown…. They put a heavy blame on Congress, which failed to fix the problem when it could and now remains silent on how to resolve the insolvent mortgage agencies. They also set out to identify the 'powerful people whose involvement in the debacle has not yet been chronicled' (many of whom are still active), and the 'key incidents that have seemed heretofore unrelated.' Morgenson and Rosner focus on the ties between government and private finance…. Extremely timely given growing fears about the possibility of another financial crash." — Kirkus Reviews

"Morgenson and Rosner have written the long-awaited volume that gets to the heart of the mortgage crisis. The fearlessness and breadth of reporting make the book as compellingly readable as it is exhaustive. Reckless Endangerment is a remarkable achievement—and should be required reading for all Americans." — Bryan Burrough, author of Barbarians at the Gate and The Big Rich