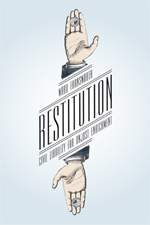 Restitution is the body of law concerned with taking away gains that someone has wrongfully obtained. The operator of a Ponzi scheme takes money from his victims by fraud and then invests it in stocks that rise in value. Or a company pays a shareholder excessive dividends or pays them to the wrong person. Or a man poisons his grandfather and then collects under the grandfather’s will. In each of these cases, one party is unjustly enriched at the expense of another. And in all of them the law of restitution provides a way to undo the enrichment and transfer the defendant’s gains to a party with better rights to them. Tort law focuses on the harm, or costs, that one party wrongfully imposes on another. Restitution is the mirror image; it corrects gains that one party wrongfully receives at another’s expense. It is an important topic for every lawyer and for anyone else interested in how the legal system responds to injustice.

In Restitution, Ward Farnsworth presents a guide to this body of law that is compact, lively, and insightful—the first treatment of its kind that the American law of restitution has received. The book explains restitution doctrines, remedies, and defenses with unprecedented clarity and illustrates them with vivid examples. Farnsworth demonstrates that the law of restitution is guided by a manageable and coherent set of principles that have remarkable versatility and power. Restitution makes a complex and important area of law accessible, understandable, and interesting to any reader.

"Immensely important. Farnsworth’s book is a major contribution to the field, providing a succinct, clear, and theoretically informed summary of the doctrine. I have little doubt that it will be of frequent use at law schools, courtrooms, and law offices alike, thus providing support to the belated revival of restitution in the United States." — Hanoch Dagan, Stewart and Judy Colton Professor of Legal Theory and Innovation, Tel-Aviv University

"Farnsworth’s terrific book covers an amazing amount of material on the law of restitution in a concise, insightful, and appealing fashion. It should contribute greatly to bringing this important branch of the law out of the shadows." — Henry E. Smith, Harvard Law School

"There has never been a good short introduction to the law of restitution and unjust enrichment. There is now, and it’s terrific—clear, conversational, sophisticated in its analysis, and with remarkable depth for its 186 pages." — Douglas Laycock, University of Virginia School of Law