How Wars of the Past Still Determine How We Fight, How We Live, and How We Think 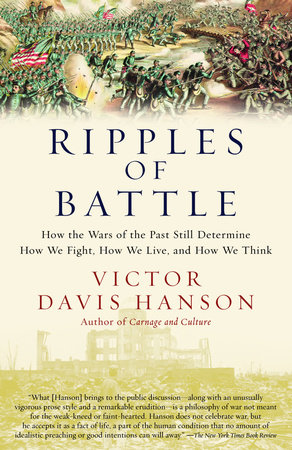 "With this usefully idiosyncratic and provocative work, Hanson may succeed the late Stephen Ambrose as America's laureate of military history. But where Ambrose's tone is ultimately elegiac, reflecting on the deeds and character of a past 'greatest generation,' Hanson's is sharp edged and confrontational, linking past history and present policy.... He makes [his arguments] with conviction and a genuine sense of wanting history to provide valuable lessons." — Publishers Weekly

"Victor Davis Hanson is refreshingly unabashed about being an old-fashioned military historian. He argues here...that, more than any other events, battles can change the direction in which history moves, and that in battles it is still the individual leader who can direct the change. That is not to say that Hanson restricts himself to a narrow battlefield vision.... [H]e displays an exceptional chronological sweep. And as RIPPLES OF BATTLE shows, he believes that battles are critically important, not least because their ripple effects tend to reach into every aspect of life, literary and cultural as well as political and diplomatic." — Russell F. Weigley, Washington Post Book World

"Victor Davis Hanson is one of our leading military historians, and in RIPPLES OF BATTLE he does not disappoint. A far-reaching story of man, war, and history, it is, by turns, iconoclastic, touching, deeply learned, and endlessly fascinating. This slim book is a grand study." — Jay Winik, author of APRIL 1865

"Victor Davis Hanson has earned a well-deserved reputation as one of the most interesting and innovative military historians in the world. In RIPPLES OF BATTLE, he shows once again why he's the best. He ranges far and wide, from World War II to the wars of ancient Greece. Along the way he combines a born storyteller's gift for rip-roaring battle narrative with a scholar's attention to the deeper meaning of conflict. Once again he manages to take what may seem familiar and to show it in an utterly new light. The 'ripples' that he identifies — which include characters as disparate as Socrates and the author of BEN-HUR — astonish and delight. This book is not only deeply enlightening but also a sheer pleasure to read. It is, in short, vintage Victor." — Max Boot, Olin Senior Fellow at the Council on Foreign Relations and author of SAVAGE WARS OF PEACE

"Like any good classicist, Victor Davis Hanson accepts the primacy of military history in human affairs. In RIPPLES OF BATTLE, a sequel of sorts to his masterful CARNAGE AND CULTURE, he shows the fascinating repercussions of three lesser-known battles. You cannot fully understand Hiroshima, the bitterness of the Old South, or the Golden Age of Athens without reading this gem of a book." — Robert D. Kaplan, author of WARRIOR POLITICS

"Hanson is a fierce, uncompromising polemicist, yet if that were all he was, he would scarcely stand out in the crowd of partisans.... What he brings to the public discussion — along with an unusually vigorous prose style and a remarkable erudition — is a philosophy of war not meant for the weak-kneed or faint-hearted. Hanson does not celebrate war, but he accepts it as a fact of life, a part of the human condition that no amount of idealistic preaching or good intentions can will away.... Hanson's military studies are impressively wide-ranging.... His scholarship can be both rewarding and pleasurable.... Powerful.... Profound... Hanson is more unflinching than most writers.... His straight talking has a refreshing clarity." — The New York Times Book Review

"Fascinating and well-executed.... Hanson is a superb storyteller and a clear and concise writer." — The Washington Times

"Each human life has an impact on others, creating ripples that eventually affect future generations. Here, Hanson (classics, California State Univ., Fresno; The Western Way of War) argues that the outcomes of certain battles have had far-reaching effects on American culture.... [W]ell written...clear and easy to read.... [T]he arguments are lucid.... Highly recommended." — Library Journal

"[A] worthy — and timely — outing in military history." — Kirkus Reviews