An Oral History as Told by the Artists, Backstage Insiders, and Fans Who Were There 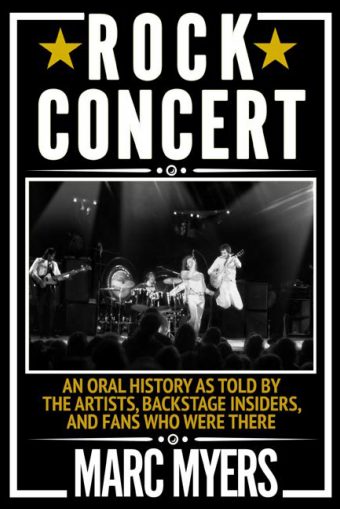 Decades after the rise of rock music in the 1950s, the rock concert retains its allure and its power as a unifying experience—and as an influential multi-billion-dollar industry. In Rock Concert, acclaimed interviewer Marc Myers sets out to uncover the history of this compelling phenomenon, weaving together ground-breaking accounts from the people who were there.

Myers combines the tales of icons like Joan Baez, Ian Anderson, Alice Cooper, Steve Miller, Roger Waters, and Angus Young with figures such as the disc jockeys who first began playing rock on the radio, like Alan Freed in Cleveland and New York; the audio engineers that developed new technologies to accommodate ever-growing rock audiences; music journalists, like Rolling Stone’s Cameron Crowe; and the promoters who organized it all, like Michael Lang, co-founder of Woodstock, to create a rounded and vivid account of live rock’s stratospheric rise.

Rock Concert provides a fascinating, immediate look at the evolution of rock ’n’ roll through the lens of live performances —spanning from the rise of R&B in the 1950s, through the hippie gatherings of the ’60s, to the growing arena tours of the ’70s and ’80s. Elvis Presley’s gyrating hips, the British Invasion that brought the Beatles in the ’60s, the Grateful Dead’s free-flowing jams, and Pink Floyd’s The Wall are just a few of the defining musical acts that drive this rich narrative. Featuring dozens of key players in the history of rock and filled with colorful anecdotes, Rock Concert will speak to anyone who has experienced the transcendence of live rock.

"Engrossing.... Eminently entertaining, this is sure to delight rock fans of all persuasions."

"Myers surveys in this engrossing oral history five decades of rock concerts, and the ‘songwriters, producers, disc jockeys, managers, promoters, and artists [that] sided with the youth culture as it struggled to be heard.’ Starting with the emergence of R&B in the late 1940s and ending with 1985’s Live Aid benefit, he vividly recreates what went on behind the scenes, onstage, and in the crowds with intimate accounts from the people who were there. Joan Baez recounts what it was like to perform at the 1963 March on Washington and to lead the crowd in singing ‘We Shall Overcome’; Bob Eubanks describes how—despite being a disk jockey who’d never produced a concert before—he scrambled to secure the funding to make the Beatles’ legendary Hollywood Bowl performance happen; and Alice Cooper recalls relocating his band from California to the Midwest, where his ‘lurid and despicable’ reputation resonated with Rust Belt kids. Myers also offers a thoughtful overview of the considerable ways in which the rock landscape has shifted since Live Aid, due to the popularity of streaming services and scandals recently brought to light on social media in response to ‘past or present me-too events.’ Eminently entertaining, this is sure to delight rock fans of all persuasions." — Publishers Weekly  (Read the full review)

"Tracks both the cultural and financial growth of the concert business.... Written as an oral history, Rock Concert is told through the voice of fans, promoters and artists who lived it.... The oral history format of the book provides readers a rare opportunity for the men and women of the concert business to tell their stories in their own voices, with new details about famous counter culture moments.... [They] offer fascinating and very detailed anecdotes.... Rock Concert is a honest, introspective book about a business badly in need of people of Myers’s caliber—he is an awarding winning music journalist, historian and author—to ensure that the history of the live music business is preserved in compelling works of history like Rock Concert." — Dave Brooks, Billboard  (Read the full review)

"A multifaceted account of the rise of the rock show from the birth of the genre until Live Aid in 1985. In the beginning, writes music journalist Myers, the rock concert was an impromptu affair. Songwriter Mike Stoller recalls that in the 1940s and ’50s, nightclubs staged shows with several acts on the ticket, and DJs would do same-day announcements when they came together. ‘White kids who otherwise never would have heard of these events found their way there,’ he notes. Black music drew ever larger White crowds thanks to those DJs, foremost among them Alan Freed in Cleveland; as they did, the limits of segregation were tested. Wanda Jackson, the pioneering rockabilly singer, remembers that in the South, the most spacious venues were state fairs, but eventually, rock shows began to move into concert halls once reserved for higher-toned music. There, acts like the Beach Boys could draw huge (and largely White) crowds. As audiences grew, music marathons such as the Monterey Pop Festival of 1967 began to take shape. Then the music changed, at least by the lights of documentarian D.A. Pennebaker. Whereas Broadway tunes were about the notion that life is good, he notes, rock tunes sounded change: ‘They were saying, ‘This isn’t friendly music. It’s a warning.’ Which is why the cameras in Monterey Pop [Pennebaker’s documentary] gravitate toward the oddness of the concert with a childlike curiosity.’ Myers charts the technological changes as well: the development of vast PA systems that enabled concert stalwarts like the Grateful Dead to send their sound out for miles; the wireless electric guitar; and complex stage-lighting systems and props that made Pink Floyd’s The Wall an unforgettable live experience. Closing with the Live Aid benefit of 1985, Myers notes that the rock concert continued but grew sclerotic (and expensive), so that ‘by the 2000s, the rock concert had fizzled as a rite of passage and was more of an event parents took children along to experience.’ A revealing, absorbing book." — Kirkus Reviews  (Read the full review)

"Admirers are already aware of his skills in getting stories out of people via his Anatomy of a Song deep-dive columns for The Wall Street Journal or his verbal breakdowns of the same on the SiriusXM ‘Feedback’ program. Now, he turns his attention to the history, the development, and the impact of the live experience.... The list of Myers’ sources from performers, managers, and promoters to journalists and execs is too lengthy to mention, but suffice to say they offer many tales, reflections and anecdotes that haven’t appeared in any other book or documentary. Every page offers a new revelation. Even more fascinating is how the book chronicles the evolution of the business and presentation models of the rock concert. Myers’ sources dig deep into how everything from sound and lighting and band’s stage sets and logos added to the experience, as well as fashion.... Though its scope and subject matter is wide, Rock Concert is one of the best books on music to come out recently, and its pure first-person, direct quote narrative is the ideal format to tell the story." — Bob Ruggiero, Houston Press  (Read the full review)

"With his new book Rock Concert, veteran journalist Marc Myers has marshalled an army to tell the free-wheeling story of the growth of this entertainment staple. Myers’ book is a well ordered oral history weaving through decades of fascinating facts and anecdotes. It is told by some of rock’s most iconic stars...as well as an A-list of promoters, managers, songwriters, producers, photographers, sound and lighting techs, filmmakers, fashion designers, roadies and fans. These are the people who witnessed many watershed concerts firsthand.... Myers is a music journalist who digs deep and tells a tale clearly." — Sal Cataldi, NYS Music  (Read the full review)

"Told in a multitude of voices from people who did the work, sang the songs, catered to the stars, played the records, or knew somebody who did, this book brings back so many memories that you may be tempted to stand on your chair and hold your lighter aloft. Stories that tell a tale of evolution — both in music and in culture — are here, but author Marc Myers packs those tales with and between little-known anecdotes and trivial occurrences that concert-goers, DJs, fans, and music-lovers will relish.Your inner rebellious-teen will thank you for reading this book, and your real-life teenage music fan will like it, too. For both of you, Rock Concert will light up your eyes." — Daily Jefferson County Union

"There are an increasing number of books about rock stars past and present, but few to none have viewed rock’s burgeoning appeal exclusively through the lens of live performance. Rock Concert by music journalist and historian Marc Myers aims to fill that void and does so with considerable insight and aplomb." — Michael Muckian, The Milwaukee Shepherd

"For this oral history of the evolution of the rock concert, spanning 1950 to 1985, writer and music journalist Myers interviewed more than 90 performers, promoters, journalists, and photographers.... Myers deftly weaves a compelling narrative that documents decades of music and cultural history. This book places the live concert in context with the broader story of popular music; its insider perspectives have an immediacy that will appeal to a broad swath of music fans." — James Collins, Library Journal