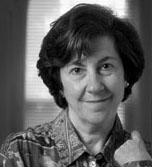 Ruth Wisse is the Martin Peretz Professor of Yiddish Studies and Professor in the departments of Comparative Literature and Near Eastern Languages and Civilizations at Harvard University. She previously was a professor of Yiddish and English Literature at McGill University, where she held an endowed chair in Jewish Studies. She has written a number of books, including A LITTLE LOVE IN BIG MANHATTAN, THE SCHLEMIEL AS MODERN HERO, and I.L. PERETZ AND THE MAKINGS OF MODERN JEWISH CULTURE. Her edited works include: THE PENGUIN BOOK OF MODERN YIDDISH VERSE (with Irving Howe), THE BEST OF SHOLEM ALEICHEM, and THE I.L. PERETZ READER. She is the president of the Association for Jewish Studies at Harvard and the senior editor of The Library of Yiddish Classics.

THE MODERN JEWISH CANON: A Journey Through Language and Culture (The Free Press, 2000)