A Biography of Jim Thompson 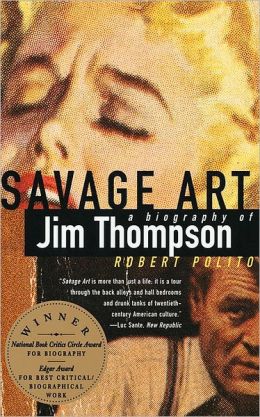 "Savage Art is more than just a life: it is a tour through the back alleys and hall bedrooms and drunk tanks of twentieth-century American culture." — Luc Sante, The New Republic

"Jim Thompson [author of The Grifters and The Getaway] and many other noir classics; suffered from the artistic curse of being ahead of his time. Though he made a living of sorts as a writer, it was only long after his death in April 1977 that his work received the acclaim it deserved. Polito, who edited an anthology of Thompson's uncollected work, examines both the life and the work in this satisfying biography. He moves chronologically through Thompson's life, offering parallel critiques of his writings, from the early true-crime magazine work through the later, now-celebrated novels. The critical analysis is perceptive and focuses on Thompson's influence on succeeding crime writers, but it is the personal biography that will entrance readers.... It makes compelling reading." — Booklist

"Exhaustively researched and critically acute, indispensable not only for anyone interested in Thompson, but also for students of the crime novel and even of the workings of conventions and careers in popular culture generally. It retrieves for us a unique, disturbing American vision." — The New York Times Book Review

"A brilliantly conceived biography of a writer whose dark vision of humanity left an indelible mark on the crime fiction of this century....What Polito has done is to link Thompson's writing to his life, and in doing so he has raised Savage Art to the level of true scholarship.... Savage Art offers a road map of human struggle with all its failures and small, hard-won victories." — Washington Post

"Savage Art is no less than a great literary biography. It reads like a great biographical novel; one life explored, dissected, and infused with a wealth of rich detail. Robert Polito brilliantly riffs off Jim Thompson's life and gives us the world he lived in. It is close to an epic history of America's pop culture. This is a terrific—and terrifically entertaining—book." — James Ellroy, author of The Black Dahlia and American Tabloid