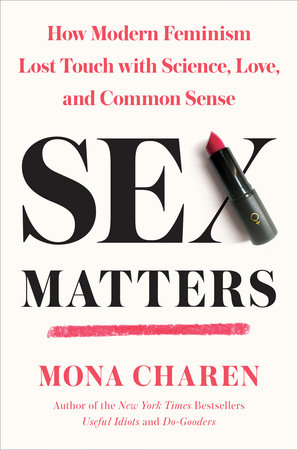 In this timely critique, Mona Charen takes a close, reasoned look at the aggressive feminist agenda undermining the success and happiness of men and women. She unpacks the ways feminism fails us at home, in the workplace, and in our personal relationships:  by promising that we can have it all, do it all, and be it all.

She upends the feminist agenda and the liberal conversation surrounding women's issues by asking tough and crucial questions, such as:

Did women's full equality require the total destruction of the nuclear family?

Did it require a sexual revolution that would dismantle traditions of modesty, courtship, and fidelity that had characterized relations between the sexes for centuries?

Did it cause the broken dating culture and the rape crisis on our college campuses?

Did it require war between the sexes that would deem men the "enemy" of women?

Have the strides of feminism made women happier in their home and work life?

Sex Matters tracks the price we have paid for denying sex differences and stoking the war of the sexes:  family breakdown, declining female happiness, aimlessness among men, and increasing inequality. Marshaling copious social science research as well as her own experience as a professional as well as a wife and mother, Charen calls for a sexual ceasefire for the sake of women, men, and children.

"Her smooth, authoritative voice weaves ideas together with life experience. She has the data to back up her arguments, but her points stick because she brings in concrete details from her own life as a mother, a wife, and a public intellectual…. Charen's book has a lot to offer women looking for their femininity to be affirmed. It also provides men with truths about the opposite sex that mainstream culture dismisses in the name of feminism." — Paul Crookston, The Washington Free Beacon

"An excellent issue-by-issue overview of conservative thinking on sex matters—from the wage gap, to abortion, to the rise of unwed childbearing, to the mommy wars, to the hookup culture and alleged rape crisis on college campuses, to the new debate over transgenderism." — Robert VerBruggen, National Review

"Radio and TV show pundit Charen delivers a scathing critique of modern feminism in this brash treatise. Each chapter focuses on a different issue plaguing women today—campus sexual assault, divorce rates, and so on—that, Charen argues, has been exacerbated by the gains of feminism. According to Charen, women are less happy today than men are, which she says is due to the mid-20th-century sexual revolution framing marriage and motherhood as prisons for women. She blames feminism for a decline in family values and uses her own experience as a highly educated, ambitious woman interested in child-rearing to argue that motherhood is, but should not be, diminished as an important choice in our society. Charen argues in favor of “traditional” gender roles, which she feels have been denied to women today because of feminist values…. Those who espouse a more conservative philosophy will enjoy her paean to complementarian gender roles." — Publishers Weekly

"Mona Charen has written a book that matters. Honest, fearless, and insightful, it's a polemic that's more than a polemic. It's a thought-provoking attempt to induce those willing to liberate themselves from contemporary pieties to think anew about the family, about equality, and about the nature of men and women." — William Kristol, The Weekly Standard

"An honest book on a crucial subject by a wonderful writer. Her book will be widely praised and widely attacked. Even the attackers, somewhere within themselves, will know it’s true. This is a book that deals in reality." — Jay Nordlinger, National Review

"Sex Matters is a cultural milestone. Mona Charen dissolves decades of fallacies in the acid of honesty. I found this book thrilling." — George Gilder, author of Life After Google

"The solution to the boorish male behavior that has given rise to the #MeToo movement is not more feminism, but less, as Mona Charen reveals in her compelling expose of feminism’s war on reality. By denying the biological and psychological differences between men and women, by ridiculing the manly virtues of gentlemanliness and chivalry and the female virtues of modesty and prudence, feminism dissolved the civilizational restraints on the male libido. The result, as Charen shows, is a wave of fatherless children and the grotesqueries of drunken hook-up sex. Gender studies departments will not issue trigger warnings about this book, they will try to ban it entirely—which is why the rest of us should read this lucid analysis of how our society has gone dangerously off track in ordering the relations between the sexes." — Heather MacDonald, Thomas W. Smith fellow at the Manhattan Institute and author of The War on Cops

"One of the greatest lies told to my generation is not only that we can do it all, but that we should as well. American mothers are pushed to a breaking point; trying to do everything at work and be Pinterest-perfect at home. Sex Matters is essential reading for any woman looking to see through the fiction that women are not only the same as men, but that they should want to be as well." — Bethany Mandel, stay-at-home mother and an editor at Ricochet

"I have long regarded Mona Charen as a national treasure. Sex Matters reinforces me in that judgment. The brilliance, wisdom, and courage on display in the book are breathtaking. Here is an author who boldly speaks moral truth to cultural power." — Robert P. George, McCormick Professor of Jurisprudence, Princeton University