Sex and the Constitution

Sex, Religion, and Law from America's Origins to the Twenty-First Century 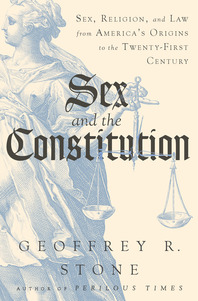 A monumental work of scholarship, Sex and the Constitution illuminates how the clash between sex and religion has defined our nation’s history.

Renowned constitutional scholar Geoffrey R. Stone traces the evolution of legal and moral codes that have attempted to legislate sexual behavior from the ancient world to America’s earliest days to today’s fractious political climate. Stone crafts a remarkable, even thrilling narrative in which he shows how agitators, moralists, legislators, and especially the justices of the Supreme Court have historically navigated issues as explosive and divisive as abortion, homosexuality, pornography, and contraception. Overturning a raft of contemporary shibboleths, Stone reveals that at the time the Constitution was adopted there were no laws against obscenity and no laws against abortion before the midpoint of pregnancy. A pageant of historical characters—including Voltaire, Thomas Jefferson, Anthony Comstock, Margaret Sanger, J. Edgar Hoover, Phyllis Schlafly, and Justice Anthony Kennedy—enlivens this landmark work, which dramatically reveals how our laws about sex, religion, and morality reflect the paradoxes and cultural schisms that have cleaved our nation from its founding.

"A fascinating, readable, richly annotated volume that would enrich the library of anyone who seeks to understand the origin of the profound cultural and legal issues that currently divide us. In a jacket blurb, Lawrence Tribe called Sex and the Constitution a 'masterpiece...a page-turner that is also a magisterial fount of wisdom.' That combination is extremely difficult to achieve but Stone has clearly done it." — Massachusetts Law Review

"Sex comes first in legal scholar Stone’s massive book. Indeed, the Constitution arrives only after page 100. Before then, part one provides an elegantly literate précis of historical attitudes about sex in the U.S.’ line of cultural inheritance, from classical Greece and Rome and the Bible to Christian Rome and Western Europe to Puritan and eighteenth-century England and its American colonies. Throughout, Stone focuses on obscenity, birth control, and homosexuality—precisely the matters that U.S. law has struggled with from the mid-nineteenth century onward. That troika of torments is less evident in part two, 'Founders,' which tracks the deliberations over the relationship of religion and government that led to a Constitution without mention of God, and, eventually, the First and Ninth Amendments, the concept of unenumerated rights, and Jefferson’s 'wall of separation' between church and state. Part three consists of brilliant historical distillations of social phenomena—the Second Great Awakening, the suppression-of-vice movement, the anticontraception and antiabortion movements, and the criminalization of homosexuality—and their legal ramifications. The last three parts present a century of cases that have, Stone says, brought the U.S. to a revolutionary moment, a high point in personal rights of sexual expression. The story continues, of course, but this is the definitive account of its past and present." — Ray Olson, Booklist (starred review)

"Sexual expression, obscenity, contraception, and abortion are the focus of this wide-ranging legal, political, and social history. Stone, a constitutional scholar whose previous books include an award-winning history of free speech, offers a broad, fascinating overview of the nation's shifting, often incendiary, attitudes toward sexuality and the impact of those attitudes on politics and law…. Stone enlivens his narrative with deft portraits of the many judges involved in cases on obscenity, contraception, abortion, and same-sex marriage. Some Supreme Court justices, appointed to uphold the views of the Christian right, disappointed their constituencies. The author applauds decisions that reflect the ‘protection of human dignity and equality’ and believes, maybe too optimistically, that religious groups are now ‘on the defensive.’ A compelling history of a nation grappling with the moral and legal freedoms that the founders strived to ensure." — Kirkus Reviews (starred review)

"Constitutional scholar Stone explores how the United States has regulated human sexuality from the colonial period to the present day. Beginning with a brief discussion of attitudes toward sexuality in the ancient world, medieval Europe, England, and Puritan New England, the author then outlines the Enlightenment-era concerns regarding government, religion, and individual freedom that shaped the U.S. constitutional law, and the lasting influence of the Second Great Awakening on morality laws. After providing this background, the work combines a thematic and roughly chronological survey of Christian attitudes toward, and U.S. legal treatment of, three areas of human sexuality: sexual speech and obscenity, abortion and contraception, and homosexual acts and identity. This title is a commanding synthesis of scholarship on over two centuries of American legal debate and practice regarding these issues, and would work well as the core text for a course of the subject.... Stone’s analysis is highly recommended for anyone seeking an introduction to the history of U.S. law and sexual expression." — Publishers Weekly

"A superb examination of the history of how the law has regulated sexual behavior and sexual expression from the ancient world to today. Geoffrey Stone’s clear and engaging writing, as well as his thorough coverage, will make this book the definitive work on sex, religion, and the Constitution. This is a brilliant book that offers a balanced and nuanced treatment of controversial topics such as obscenity, abortion, and same sex marriage." — Erwin Chemerinsky

"No-one should miss out on Stone’s spectacular tour through more than 2,000 years of sex, religion, culture, and law. A treasure-house of philosophical brilliance and legal and historical insight—not to mention erotic delights!—this masterpiece is the rarest of combinations: a page-turner that is also a magisterial font of erudite wisdom. In this capstone of his truly distinguished career in the law, Stone leads us on a panoramic investigation of the evolution of sexual mores both here and abroad that culminates in a refreshingly accessible look into the inner sanctum of our Supreme Court and into the roles of the Court, social and political activism, and popular movements in carving paths through the densely planted constitutional landscape." — Laurence Tribe

"Few, if any, legal scholars possess the capacious intellect and encyclopedic command of constitutional law and American history to make us see in an entirely new light what is perhaps society’s most commonly discussed subject. In devoting his unique talents to Sex and the Constitution, Geoffrey Stone has created a volume of lasting significance that quickly will become essential reading not only for law students and scholars but for all who want to better understand sweeping cultural transformations that continue to roil society. Professor Stone provides layer upon layer of historical, jurisprudential, and social context to explain how we have arrived at this point, all of it impeccably researched, in what is an astonishing tour de force" — Lee Bollinger

"Magnificent and monumental—a stunning blend of dispassionate analysis and deep moral conviction. Think that the United States was born as a Christian nation? Think again. Linking ancient history and today's headlines, Stone shows that with respect to sex and freedom, history is full of amazing shifts and turns - and that we are in the midst of a genuine revolution." — Cass Sunstein