Signs of the Times

Deconstruction and the Fall of Paul de Man 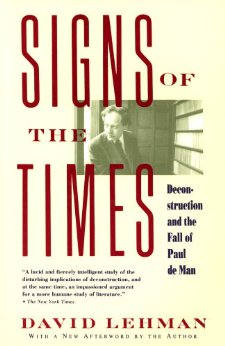 Whatever happened to deconstruction?  The term is now slang for fancy analysis, but as dogma it is dead in academe. This is the book that killed it. Fearlessly cutting through the calculated obfuscation so characteristic of deconstruction, Lehman gives the only clear explanation of it ever written.  He intertwines brilliant literary criticism, an art he singlehandedly rescues from the self-importance and obscurantism of deconstruction, with the extraordinary biography of one of its most prominent exponents, Paul de Man, a Yale professor who concealed his past as a Nazi sympathizer, abandoned his first wife and family, and wove an elaborate literary theory that conveniently touts the impossibility of truth.

"As David Lehman recounted in his astute book Signs of the Times, the worst suspicions of critics of deconstruction were confirmed when the Paul de Man scandal exploded in 1987 and deconstructionist rationales were advanced to defend the indefensible." — Michiko Kakutani, The Times Literary Supplement (2018)

"With Explaining Hitler, [Rosenbaum] has written a book that does for Hitler studies what David Lehman's superb book Sign of the Times did for deconstruction: he has written an exciting, lucid book informed by two qualities in increasingly short supply in academic circles: old-fashioned moral rigor and plain old common sense." — Michiko Kakutani, The New York Times (1998)

"Fascinating.... It stands as a lucid and fiercely intelligent study of the disturbing implications of deconstruction, and at the same time, as an impassioned argument for a more humane study of literature." — Michiko Kakutani, The New York Times (1991)

"What Lehman offers is a survey of the current fortunes of Deconstruction as a professional or ideological routine, and especially as a talismanic or valorising term, in American intellectual life, and of its penetration into other disciplines than literature. He also gives the fullest account I have seen of the known biographical facts about de Man, which apparently include financial irregularities, possible bigamy, a Rousseauistic callousness towards the children of his first marriage, as well as Nazi collaboration and four decades of mendacity or dissimulation on most of these subjects. Lehman offers good coverage of the gobbledegook and doublethink brought to bear in de Man's defence." — London Review of Books

"What David Lehman's outstanding book demonstrates is that one of the most powerful intellectual movements in American universities is morally bankrupt.. . . This book is not only a bag of nails for the coffin of deconstruction but also a hammer and strong arm. Yet deconstruction has already spawned offspring that will survive it. According to Mr Lehman, today's 'politically correct' academics come close to embodying a notion of the literary critic as an agent of the thought police: 'acquiescing in the notion that disinterested inquiry is an impossibility and that every value judgment is necessarily a power play before it is anything else, they make their decisions by applying ideological litmus tests.' Some police force: it cannot even spot wickedness in its own ranks." — The Economist

"Vividly written, thoroughly researched, even-tempered and readable ...an especially compelling introduction to deconstruction and its consequences." — The Wall Street Journal

"The Sokal hoax has shown, once and for all, the nullity of Theory, just as, a few years ago, the de Man affair ...(described and analyzed in David Lehman's brilliant book Sign of the Times), showed its moral nullity." — Raymond Tallis, Times Literary Supplement

"The 1991 publication of David Lehman's landmark Sign of the Times has served as a turning point in the literary culture wars." — New Oxford Review

"Lehman's prose sparkles and he writes with disarming good humor underlying seriousness and as much clarity as the subject will stand." — Los Angeles Times Book Review

"In considering this scandal, Mr. Lehman reveals something more sinister, not so much in the mysterious Paul de Man as in his post-structuralist defenders, who used the tools of deconstruction to nullify, or pathetically attempt to nullify, what de Man himself had actually done. If a 'text' has no external'referent,' they reasoned, de Man's Nazi propaganda, the text, is merely a verbal construction needing to be contextualized. . . . With marvelous ingenuity, the academics 'showed' that de Man's pro-Hitler propaganda was actually anti-Hitler when contextualized. It didn't work. The 'referent' did exist. History was not a subjective text, and deconstruction is fated to pass away. It will be a nuisance in the academy for a while, but it need not detain us." — National Review

"I recently tried to order a book critical (though hardly dismissive) of [deconstruction], David Lehman's highly readable Sign of the Times, which offers a chronicle of the political misbehavior (among other things) of the late Paul de Man: it is unaccountably out-of-print. [N.B. It is now available as an e-book.]" — The American Scholar

"A bracing masterpiece of name-calling, a book guaranteed to produce rapid heart beat in literary intellectuals.... Lehman superbly synthesizes the events of the de Man debacle.... Sign of the Times exemplifies invigorating cultural criticism.... It's an immense pleasure to read." — Newsday

"Deconstruction, crudely, is a paradox about a paradox: it assumes that all discourse, even all historical narrative, is essentially rhetoric. . . . The most interesting part of Mr. Lehman's book is his record of what followed the dismaying discoveries [about de Man]. . . . The ironies grew clear. The discourse so often used to de-canonize and de-fame other writers was put to work to canonize and re-fame the master of deconstruction. More significantly, the vacancies of his theory . . . became a way to pronounce de Man's early writings undecidable. . . . As writers of fiction know, the point about writing is that it is existentially real, an active mode of discovery through the modalities of the imagination. . . . When writers are censored, imprisoned, killed or threatened with death for their writings, this is not because they are the disciples of undecidability. Writing is an act of expressed moral responsibility." — The New York Times Book Review