June 1967 and the Making of the Middle East 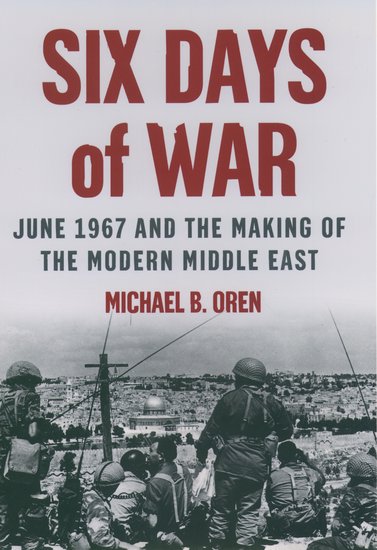 SIX DAYS OF WAR is both exceedingly timely and provocative. By gathering together all available sources on the subject, the book aspires to set a new standard in Middle Eastern history. Oren's complete account of the events surrounding and encompassing the Six Day War proves to be an engrossing read and a definitive and much-needed chapter in Israeli and world history.

"Well written, based on extensive research, this book can be highly recommended." — Winnipeg Free Press

"Trying to explain the origins of the half-century-old Arab-Israeli conflict is, by any stretch of the imagination, an intricately complex and sensitive task, especially when the narrator is directly concerned by the events. Yet, Michael B. Oren manages to accomplish this feat quite masterfullly in his latest book, SIX DAYS OF WAR.... [A] highly informative work...extensive and, what was without a doubt, exhaustive research." — UPI

"This is the most complete history to date of the Six Day War of 1967, in which Israel entered and began its occupation of the West Bank and Gaza Strip. While no account can be definitive until Arab archives open, Oren, a Princeton-trained senior fellow at Jerusalem's Shalem Center who has served as director of Israel's department of inter-religious affairs and as an adviser to Israel's U.N. delegation, utilizes newly available archival sources and a spectrum of interviews with participants, including many Arabs, to fill gaps and correct misconceptions.... Oren convincingly establishes in an often engrossing narrative the reactive, contingent nature of Israeli policy during both the crisis preceding the conflict and the war itself." — Publishers Weekly (starred review)

"This is a masterly book.... With a remarkably assured style, Oren elucidates nearly every aspect of the conflict.... In writing his strategic chronicle, Oren has also drawn the most penetrating and subtle assessment of the Israeli mind that I've encountered.... The authoratative chronicle of the war. His achievement as a writer and a historian is awesome." — Benjamin Schwarz, Atlantic Monthly

"The reunification of Jerusalem is just one of the tantalizing tales in SIX DAYS OF WAR.... The book is the most comprehensive report yet about what many believe is Israel's greatest military triumph." — Miami Herald

"The most extensive work to date of the Six Day War...this fascinating book is a must-read for anyone interested in Israel or international politics in general." — Canadian Jewish News

"The most detailed, the most comprehensive and by far the best-documented history that we have on this short but fateful war.... A fast-moving and action-packed narrative that sheds a great deal of new light on all the major participants of the war and on the conflict and cooperation between them." — The Guardian (London)

"The most detailed, most comprehensive and by far the best-documented history that we have on this short but fateful war." — Manchester Guardian Weekly

"The most comprehensive treatment yet to appear about the brief but intense fighting.... Oren has produced as thorough a study of the Six-Day War as can be imagined today." — Richmond Times-Dispatch

"The most comprehensive history yet.... SIX DAYS OF WAR scores highly in telling an extremely complicated story within a narrative which, despite being loaded with a crushing volume of research, reads at times like the breeziest blockbuster. Oren looks at the colourful protagonists — Egyptian President Gamel Abdel Nasser, Lyndon Johnson, King Hussein of Jordan, and the one-eyed Israeli defence minister, Moshe Dayan — with a thriller writer's eye for drama and suspense.... Gripping." — Financial Times

"The finest book ever on this topic.... Spare, direct, and gripping." — Daniel Pipes,, The Jerusalem Post

"The brilliance of Oren's work...is mining dozens of interviews with Arab battlefield leaders and recently released documents from governments in Israel and Russia to provide what might be the most complete synthesis yet of what preceded all the shooting.... It's in establishing the context, including in Israel, the United States, and the Soviet Union, that Oren's account of the 1967 war stands apart." — Boston Globe

"The book is the most comprehensive report yet about what many believe is Israel's greatest military triumph." — St. Paul Pioneer Press

"Oren's exciting diplomatic and military history of these events cleverly moves back and forth between the smoke-filled rooms in Tel-Aviv, Cairo, Amman, Damascus, Moscow, and Washington and the battlefields in the Sinai, Golan Heights and the West Bank where the fate of the Middle East and the world was being decided. Through extensive archival research and interviews, Oren has pieced together the thoughts of officials on all sides of the conflict." — Rocky Mountain News

"Oren's description of the acutely tense and nervous atmosphere before and during the war reflects ironically on the supposed national unity of the time. This is not only the best book so far written on the Six Day War, it is likely to remain the best." — Washington Post Book World

"Oren's account of the war is detailed...fascinating." — Daily Telegraph (London)

"Oren is most original and at his very best when he unravels rich and new details about both the decision-making processes and key officials within the Israeli cabinet before, during, and after the war." — Middle East Policy

"Oren argues persuasively that the events that continue to control Israel and Palestinian relations flow from that war, that Israel's success in standing up for itself gave the little democracy in the Middle East the hope and the confidence to believe in the possibility of meaningful peace negotiations." — The Washington Times

"One of the most valuable recent works on the subject... An essential edition." — Library Journal

"Michael Oren's riveting account of this entire saga — drawn from previously untapped American, Russian, and Israeli archives, along with Syrian and Jordanian sources — puts to rest a number of old misconceptions and untruths.... [A] systematic and exhaustively researched narrative.... Michael Oren has written a near masterpiece of judicious but captivating history. In its suspense and human drama it is reminiscent of Steven Runciman's THE FALL OF CONSTANTINOPLE or Donald Morris's THE WASHING OF THE SPEARS; in its scholarship and professionalism, Gerhard Weinberg's A WORLD AT ARMS. While Oren's goal is to write history, not contemporary political analysis, SIX DAYS OF WAR turns out to be a far better guide to the present crisis than what we read and hear daily from our historically ignorant columnists and pundits." — Victor Davis Hanson, Commentary

"Michael Oren has written what is surely the definitive history of the Six Day War.... His narrative is precise but written with great literary flair.... In no one else's study is there more understanding or more surprise." — Martin Peretz, editor and publisher, The New Republic

"Michael Oren has combined a scholar's sense of thoroughness with a novelist's sense of drama in writing this polished and gripping history of the 1967 war.... He has constructed the best account yet of the most momentous event in the modern Middle East — six days that shook the world." — Fareed Zakaria, editor, Newsweek International

"Michael B. Oren gives a meticulous, blow-by-blow history... [He] has impressive credentials to tell this story.... He lines up facts, more facts, and still more facts, with little editorializing. He has dug up carloads of documents, many previously secret or inaccessible.... Oren's writing is clear and unadorned, allowing the swift development of events to provide the drama.... It is altogether a serious and important work.... A key volume." — The Weekly Standard

"Judicious.... The narrative is lively, breaking new ground on many points, and in the incorporation of Arab sources and first-hand accoutns gives it a balance that cannot be seriously challenged." — Journal of Military History

"In masterly fashion, Oren, an Israeli historian, describes how one move led to another, complete with the accidents and misunderstandings inherent in diplomatic and military manoeuverings. He has thoroughly explored Israeli, American, and Russian archives, and made use of such Arab material as exists (mostly published memoirs), while supplementing his narrative by interviewing many who played a part, large or small. This admirable book is likely to be the last word on the six-day war for a long time." — David Pryce-Jones, Sunday Times (London)

"Hopefully such understanding may assist us in reaching peace in the Middle East." — Ehud Barak, Former Prime Minister of the State of Israel

"For those of us for whom the rights and wrongs of the Middle East are absolutely and eternally confusing, Michael Oren's book could not have arrived at a better time." — The Scotsman

"Excellent.... Gripping.... This is not only the best book so far written on the Six-Day War, it is likely to remain the best." — Newark Star-Ledger

"As complete an account of the 1967 war as is ever likely to be written. In addition to providing the definitve history of that conflict, Michael B. Oren's SIX DAYS OF WAR offers a valuable perspective on the current troubles in the region." — Newsday

"As close to a definitive history as we are likely to get.... Well-written and truly objective.... An outstanding job.... A splendid book." — Walter Laqueur, The Jerusalem Post

"An immediate lesson in historical continuity.... In addition to being a highly readable, even gripping account of the 1967 conflict, Mr. Oren's SIX DAYS OF WAR is also a powerful illustration of the way history mixes basic forces with the accidental and improvisational.... Fascinating...fabulous richness of detail.... [Oren] has woven a seamless narrative.... Tragedy is character, as the Greeks understood, and Mr. Oren's masterly account shows how apt that insight is to the tragedy-afflicted Middle East, past and present." — Richard Bernstein, The New York Times

"An excellent new history of the 1967 war." — David Remnick, The New Yorker

"A richly detailed and lucid account... thrilling.... What makes this book important is the breadth and depth of the research. Oren draws on archives, newly declassified documents, memoirs and interviews from Israel, America, Britain and what was then the Soviet Union...he uses many Arab memoirs and accounts, giving the book a balanced tone and offering fascinating new details.... A powerful rendering of what has turned out to be a world-historical event." — The New York Times Book Review

"A magisterial work that is not only riveting reading, but also likely to become the standard work of the war that shaped the contemporary Middle East." — Philadelphia Inquirer

"A bad set of circumstances leading up to war. Mr. Oren brings a novelist's flair to recounting them and to the events of the war. His meticulous research cuts through the propagandized histories on all sides. Drawing on a wealth of newly available documentary evidence — as well as interviews with surviving players — he is unsparing toward all involved with this drama." — The Wall Street Journal

"[A] remarkable book.... The story...is compelling and Oren has researched it with impressive energy and thoroughness.... It is hard to believe that there will be a more authoritative account of what was one of the most dramatic and momentous events of the 20th Century." — The Spectator

"[A] meticulous new history." — The Economist

"[A] masterful, authoratative work of military and diplomatic history.... One reads SIX DAYS OF WAR both for its penetrating and detailed account of 1967 and for its tragic relevance to the Middle East's turmoil. These accomplishments arise from Oren's intellectual honesty, ground-breaking research and supple prose.... An awesome feat of scholarship." — Newsday