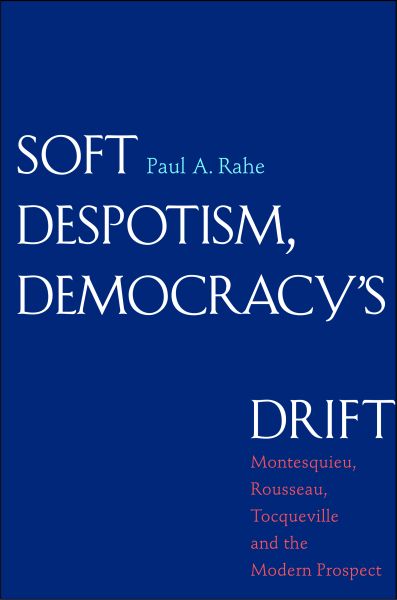 In SOFT DESPOTISM, DEMOCRACY'S DRIFT, Paul A. Rahe argues that to make sense of present trends, we must examine the nature of the modern commercial republic and its political psychology. Three great French political thinkers are uniquely helpful to this end.  Their views of the prospects, vices, and virtues of the liberal polity anticipate our current situation.  The first of these—Montesquieu—was driven by curiosity to visit Great Britain in the wake of the devastating defeat that it had inflicted on his native France in the years of Louis XIV, and there he discovered that, under modern circumstances, Carthage would prove more powerful than Rome.  The second—Rousseau—wandered from the civic backwater of Geneva to Paris, when the Enlightenment was at its height, and recoiled in disgust.  The third—de Tocqueville—crossed the Atlantic to Jacksonian America and found there a remedy for the ills besetting post-revolutionary France. All three of these men were partisans of liberty. All three were amazed at the emerging bourgeois world in which they found themsleves. And all three worried that the ethos of the new egalitarian, commercial order might provide the psychological foundation for a new kind of tyranny.  One more devastating to the human spirit than any known in the past.  It is the argument of this book that the gentle, provident, tutelary, and highly intrusive despotism dimly foreseen by Montesquieu, forecast in clearer terms by Rousseau, and sketched in fine detail by de Tocqueville has now fully arrived in the form of the administrative state.  Nothing can rescue us from its grasp—apart from a return to the first principles articulated in the Declaration of Independence and given practical form in the Constitution of 1789 and the Bill of Rights.