Take Arms Against a Sea of Troubles 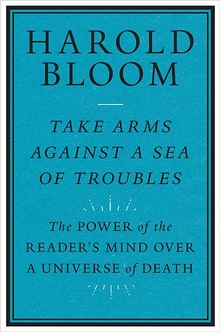 This dazzling celebration of the power of poetry to sublimate death—completed weeks before Harold Bloom’s passing—shows how literature renews life amid what Milton called “a universe of death.” Bloom reads as a way of taking arms against the sea of life’s troubles, taking readers on a grand tour of the poetic voices that have haunted him through a lifetime of reading. “High literature,” he writes, “is a saving lie against time, loss of individuality, premature death.” In passages of breathtaking intimacy, we see him awake late at night, reciting lines from Dante, Shakespeare, Milton, Montaigne, Blake, Wordsworth, Hart Crane, Jay Wright, and many others. He feels himself “edged by nothingness,” uncomprehending, but still sustained by reading. Generous and clear-eyed, this is among Harold Bloom’s most ambitious and most moving books.

"In 16 dense, erudite, and surprisingly intimate essays, Bloom offers a sweeping overview of major Western poets, from Homer to contemporary African American Jay Wright, whom Bloom praises as 'among the best American poets of whatever origin or complexion.' As well as celebrating beloved writers, Bloom also reassesses his own work. 'If you live ninety years,' he admits, 'you will be a battered survivor. Your own mistakes, accidents, failures at otherness beat you down.' To assuage those feelings, he advises, 'Rise up at dawn and read something that matters as soon as you can.' He reconsiders his argument in The Anxiety of Influence, analyzing ways in which writers respond to their predecessors. Now, he reveals, the anxiety of influence 'seems to me literary love tempered by ambivalence, as all love is.' Throughout, Freud looms large as 'a major essayist in the tradition of Montaigne and Emerson, and not as a supposed scientist'; not as 'the master of dream interpretation (where I doubt him) and certainly not the would-be therapist (talking cures) but the pessimistic seer of the human condition.' Bloom’s visceral connection to poets results in vivid, vigorous portraits, whether of poets he knew—Auden, Frost— or those he has read for so long that 'it scarcely seems reading anymore.' As he writes of Wallace Stevens, 'I am now perpetually on oxygen yet still have the sensation that I breathe the clear air of Stevens.' Early on in this astute collection, the author marks his terrain: 'What you read and how deeply you read matters almost as much as how you love, work, exercise, vote, practice charity, strive for social justice, cultivate kindness and courtesy, worship if you are capable of worship. The mind is an activity and will decay into dark inertia if not sustained by the sustenance of reading.' Reading, this stirring collection testifies, 'helps in staying alive.'" — Kirkus Reviews (starred review)  (Read the full review)

"It is a ferocious final book and in fact this astonishing prose was dictated to an assistant while Bloom’s end approached. Allow yourself to be reminded of the legend of Harold Bloom and his love of literature: the power of his interpretive mind and his insatiable engagement with the transformative power of poetry." — Michael Silverblatt, Bookworm  (Read the full review)

"With his unparalleled expertise in poetry of the modern British and American traditions paired with his fading health, Bloom knew all too well that the candle burns brightly at both ends.... Everything was an allusion for Bloom in the end, yet nothing – especially not the wisdom of literature – was wholly illusory. In Take Arms against a Sea of Troubles and The Bright Book of Life, he shows his readers how even literary criticism must be decoded like a dramatic poem or a novel before we can consume it, straight-up, as a sharp and sometimes bitter history of the writer. The final philosophical paradox of Harold Bloom’s oeuvre is that we are all collectively made and individually disclosed by our literary sources." — Eileen M. Hunt, The Times Literary Supplement  (Read the full review)

"Bloom’s final books reflect one of the most personal and distilled versions of the moral code that sustained his idea of poetic thinking as the highest path to universal truth.... It is not difficult to see why this belief, which Bloom has repeated in one way or another for decades, has found so much resonance outside the academy, where there is still a community of readers seeking truth and solace in reading." — Ignacio M. Sánchez Prado, Los Angeles Review of Books  (Read the full review)

"He still seeks what is in the 'frontier' between worlds, that shadowy space from which Shelley and Yeats and the erratic Blake derived their visions; in myth, dream and 'dreaming awake.' Here, critic becomes reader, whose commentary begins in appreciation, Keats’s concept of “negative capability” and awe, or even love. Tenaciously curious, ever self-revising, Bloom cannot stop trying to assess his visceral, elemental responses. His last book becomes, more than any before it, a magnificent meander through the flames and the breezes, by the waters and over the earth of those creations, intimations and thoughts that most matter. There will be few grand streams-of-consciousness like this in the future. A golden age of the academic has passed and with it one of the most luminous and subjective of its spirits—a soul at the end in pursuit, it may be said, of the ultimate absence that Dante, after Ezekiel, seeks to inscribe as 'aerial clarity'—'celestial light.'" — Stoddard Martin, The Jewish Chronicle

"Late critic and Yale professor Bloom leaves behind a passionate reflection on a lifetime of reading. Conscious of his own limited time left, he reflects that 'if life is to be more than breathing, it needs the enhancement of knowledge or the kind of love that is a form of knowledge,' as he describes gaining from his favorite authors. These include Walt Whitman, from whom 'I never stop learning,' whether about poetry or about the capacity to simply enjoy nature. Another is Samuel Johnson, Bloom's model reader-the lexicographer 'devoured books as he did his meat' from his early days in London, 'when he walked the streets [not] knowing where the next meal or bed or book was to be found.' Bloom also shares fascinating glimpses of his academic career, from his testy run-in with British critic F.R. Leavis as a PhD student (Leavis's statement, 'I have buried [Percy Bysshe] Shelley,' elicited the 'rather brash' reply 'Shelley always buries his own undertakers'), to 'the theoretical and pragmatic disputes I had been having with Paul de Man and Jacques Derrida at Yale' at a later point. Perhaps Bloom's most personal work, this is a fitting last testament to one of America's leading 20th-century literary minds." — Publishers Weekly