Taking on the Yankees 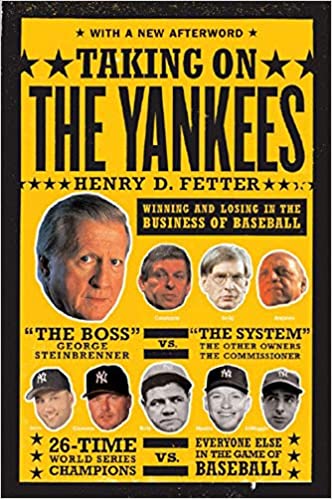 The New York Yankees have, without question, dominated the sport of baseball as no team ever has. Tracing the rise of this championship franchise from the early 1900s to the present, Taking on the Yankees examines the team's rise to dominance in the sport, and the economic, historical, and social factors that have elevated them to consistently be the premier team in baseball.

Author Henry Fetter contrasts them with their three greatest National League rivals: the St. Louis Cardinals, the Brooklyn Dodgers, and the New York Giants as he chronicles baseball's growth from a fledgling sport into America's national pastime and, eventually, into a multi-billion-dollar industry. The result is an exceptional and unique history of the Yankees and a compelling portrayal of one hundred years of major league baseball.

"Employing insight rather than hindsight, and steering clear of apocrypha, lawyer/sportswriter Fetter ably delineates the role of business in the evolution of professional baseball. The analysis pivots around the unrivaled success of the New York Yankees during the last century, though Fetter also examines the executive offices of the New York Giants, the Brooklyn Dodgers, and the St. Louis Cardinals to find the reasons behind the teams' successes and failures. His thesis is that ownership innovation, strategy, and management skills—both with the players and with the social, economic, and legal challenges that society carried onto the field, from blue laws to racism—play a determining role in who wins and who loses in the long run. The Yankees had the bucks, for sure, but they also had a managerial hierarchy that coordinated the administration of the team, with carefully delineated spheres of responsibility.... Fetter presents a compelling argument: it isn't all about money, but how that money is spent. A thorough overview of baseball as a business, turning the limelight on the executive offices when it usually plays on the field." — Kirkus Reviews

"Taking on the Yankees is a treasury of revealing vignettes from the executive suite, a succession of little dramas that in their own way are as riveting as the action on the field." — The Tampa Tribune

"An absorbing account of the relationship between good business practice and winning baseball.... Riveting.... With its historical sweep, Fetter's work stands as a solid companion to Michael Lewis's Moneyball on how to build a winning baseball organization." — Publishers Weekly

"Long before their Evil Empire spanned the globe, ruthlessly crushing all that was good and right in the baseball world, they were the lowly New York Highlanders. As the Yankees' centennial comes to a close with Jeter's Golden Boys still sitting on a mere 26 World Series rings, Henry D. Fetter examines their rise from the worst team in New York to Imperial Goliath.... Fetter describes how methodical organization and thoughtful management gave rise to the Yankees' disgustingly talented 1920s dynasty; how, one by one, the Yankees' front office out-thought and out-managed its rivals; and how the Yankees buried their two intercity rivals so badly that they were forced to limp west. The Sox may be cursed, but Fetter shows how the Yankees' success owes nothing to cosmic bogeymen." — Weekly Dig (Boston)

"Fetter extends his analysis beyond the New York Yankees, focusing on several other teams as well while he explores the changing trends in the financial management of Major League Baseball teams....Well-written, an easy and entertaining read.... Fetter takes the reader on a behind-the-scenes journey through the history of major league baseball.... Fetter does a nice job of covering the economic aspects of the game while mixing in just enough on-field action to keep things interesting.... A useful framework for anyone interested in the business of baseball.... Fetter provides an excellent read, serves as a great resource for other scholars, weaves a good story, and raises some interesting questions.... I highly recommend this book to anyone who is a Yankee fan, a baseball fan, or has an interest in the business of baseball." — Economic History Services

"Making his case for the Yankees' success by way of comparison allows Fetter to tell the history of the game for the past 100 years." — The New York Times Book Review

"Baseball—and this is unfortunately not understood by the men who run it—is no longer the American game because it has become something grander. It is now the great game of capital. As Henry Fetter understands, baseball is 'removed from the orchestrated machinations of professional football and basketball with their owners marching in lockstep to a master plan of broadcasters and marketers' by the scope it allows for 'innovation and initiative by individual franchises' unwillingness to submit to the leveling-down process implicit in the quest that...leads to competitive mediocrity.'... Why baseball alone among team sports should reward the capitalist virtues is a long story.... Why the lords of baseball do not recognize this as a unique strength of the game and instead try by every means to bring about 'competitive mediocrity' is another long story..... Along with these two long stories come roughly 100 years of baseball business in Taking on the Yankees . Mr. Fetter has managed to account for them in an almost uniquely elegant manner, and his study should become the primary work on the subject....It is an excellent book." — The New York Sun

"Fetter meticulously recounts the rise of the Yankees." — The Wall Street Journal

"A smart, nicely researched book, based primarily on material culled from newspapers and legal cases that debunks some of the conventional wisdom about the baseball business. Fetter argues that the Yankee dynasty was a product of management strategies, economic forces, social changes, and political and legal pressures. These developments were part of the sport's ongoing struggle to respond to social, economic, and legal challenges that developed over time, such as the advent of Sunday baseball, the growth of radio and television, the erosion of the color line, the relocation of franchises, and, in the 1970s, the shift in bargaining power from management to labor. Invariably the Yankees were better able to adapt to the new circumstances, enabling them to establish, maintain, and, recently, regain their supremacy in the sport. Although the book is in part a business history of the Yankees, it is primarily an account of three National League rivals: the New York Giants in the 1920s and early 1930s, and the Brooklyn Dodgers after World War II. Fetter claims that no team could overtake the Yankees, whose stellar performance on the field he attributes more to the club's wealth and the shortcomings of its competitors than to its innovative management skills, strategy, and style." — Business History Review