The Holiday at the Heart of the American Experience 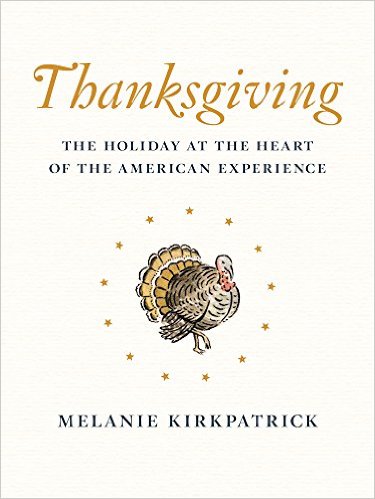 We all know the story of Thanksgiving. Or do we? This uniquely American holiday has a rich and little known history beyond the famous feast of 1621.

In Thanksgiving, award-winning author Melanie Kirkpatrick journeys through four centuries of history, giving us a vivid portrait of our nation's best-loved holiday. Drawing on newspaper accounts, private correspondence, historical documents, and cookbooks, Thanksgiving brings to life the full history of the holiday and what it has meant to generations of Americans.

Many famous figures walk these pages—Washington, who proclaimed our first Thanksgiving as a nation amid controversy about his Constitutional power to do so; Lincoln, who wanted to heal a divided nation sick of war when he called for all Americans—North and South—to mark a Thanksgiving Day; FDR, who set off a debate on state's rights when he changed the traditional date of Thanksgiving.

Ordinary Americans also play key roles in the Thanksgiving story—the New England Indians who boycott Thanksgiving as a Day of Mourning; Sarah Josepha Hale, the nineteenth-century editor and feminist who successfully campaigned for Thanksgiving to be a national holiday; the 92nd Street Y in New York City, which founded Giving Tuesday, an online charity established in the long tradition of Thanksgiving generosity. Kirkpatrick also examines the history of Thanksgiving football and, of course, Thanksgiving dinner.

While the rites and rituals of the holiday have evolved over the centuries, its essence remains the same: family and friends feasting together in a spirit of gratitude to God, neighborliness, and hospitality. Thanksgiving is Americans' oldest tradition. Kirkpatrick's enlightening exploration offers a fascinating look at the meaning of the holiday that we gather together to celebrate on the fourth Thursday of November.

The book includes "Readings for Thanksgiving Day," designed to be read aloud around the table, and "Thanksgiving Recipes and Bills of Fare."

"It is a new book which goes way beyond the standard cultural discussions of Pilgrims, turkey, holiday traffic and early morning bargain shoppers. Thanksgiving: The Holiday at the Heart of the American Experience by Melanie Kirkpatrick is handsomely packaged and offers uncommon resources for those seeking insight on why we observe the day…. The book includes suggested readings to be offered at the Thanksgiving table. Those readings include the 100th Psalm from the Bible, plus an American soldier’s letter home, written in 1776. Thanksgiving, the holiday, did not escape some turmoil. The book also examines the role of U.S. presidents and civic-minded stalwarts who worked to ensure the day’s heritage and permanent spot on the calendar…. She has drawn on vintage newspaper accounts, private correspondence, historical documents, and even very old cookbooks to craft her portrait of the day." — Jennifer Harper, The Washington Times

"Kirkpatrick takes the reader through four centuries of political, cultural, and religious history to tell the tale of how Thanksgiving became a sacred and utterly unique American holiday….. One of the strengths of the book is the eloquence and insight Kirkpatrick brings to her assessment of Thanksgiving as a religious holiday…. Thanksgiving is also chock full of holiday trivia. Like the Thanksgiving holiday itself, Kirkpatrick goes out of her way to be inclusive…. Thanksgiving is a feast of political and cultural history that is arriving on bookshelves just in time to whet our appetites for the approaching holiday. Given its wide range and timeliness, history buffs, sports fans, foodies, and pretty much anyone else who celebrates Thanksgiving would appreciate this book as a party favor or gift this holiday season." — Stephen Beale, New Boston Post

"In this short, beautiful, history of our oldest national custom, Melanie Kirkpatrick reminds us what we Americans have, and will always have, in common. An edifying, elevating book in the year of our worst division, Thanksgiving uplifts by informing and takes us to our better, internal American." — Amity Shlaes