The Age of Caesar 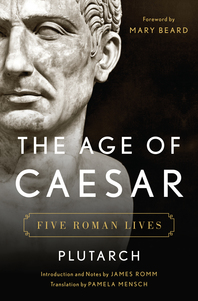 This is an outstanding new edition of Plutarch, the inventor of biography, focused on five lives that remade the Roman world.

Pompey, Caesar, Cicero, Brutus, Antony: the names still resonate across thousands of years. Major figures in the civil wars that brutally ended the Roman republic, they haunt us with questions of character and authority: how to safeguard a republic from the flaws of its leaders. Plutarch’s rich, vivid profiles show character shaping history through grand scale events and intimate details. The creator and master of the biographical form, Plutarch brilliantly locates character in small gestures such as the selfless Brutus’s punctilious use of money, or Caesar’s embrace of the plainspoken discourse of the soldier rather than the eloquence of Cicero.

This is a true reader’s edition of Plutarch. The translation lends a straightforward clarity to Plutarch’s prose, and the notes helpfully identify people, places, and events named in the text. The substantial introduction and foreword explore both Plutarch himself as a historical figure and the basic history of the republic’s fall.

"Classicist Romm has selected five Roman lives: military general Pompey; lawyer and orator Cicero; Caesar, central to all of these lives; his treacherous adversary Brutus; and his supporter Antony, a vainly handsome man ‘of princely dignity.’ These biographies, Romm believes, offer ‘an immersion in the events of the classical past and an encounter with its greatest personalities.’ An introduction by noted classical scholar Mary Beard and informative footnotes help to fill in that sense of the past, and a felicitous translation by Mensch makes Plutarch’s prose lively and accessible. The biographies are thrillingly dramatic, as Plutarch recounts savage battles, bloody betrayals, and constant political upheaval." — Kirkus Reviews

"The formidable duo of Romm & Mensch have pulled it off again—accomplishing with ease the tricky feat of making some of the best biographies from the best biographer of the ancient Roman world newly accessible in fresh, accurate, intelligently commented translations to a readership extending well beyond the usual Classicist suspects." — Paul Cartledge

"This reader’s edition of Plutarch’s Lives brings to life the captivating personalities and topsy-turvy politics of the late Roman Republic. Fluid and poised, Pamela Mensch’s translation does a fine job conveying the measured power of Plutarch’s prose. The introduction—authored by one of the most distinguished ancient historians of her generation—masterfully sets the scene, and James Romm’s notes will be an invaluable resource for readers." — Daniel Padilla Peralta