Words That Moved a Nation 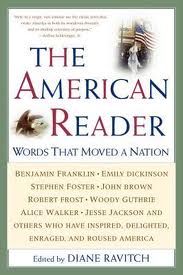 The American Reader is a stirring and memorable anthology that captures the many facets of American culture and history in prose and verse. The 200 poems, speeches, songs, essays, letters, and documents were chosen both for their readability and for their significance. These are the words that have inspired, enraged, delighted, chastened, and comforted Americans in days gone by. Gathered here are the writings that illuminate—with wit, eloquence, and sometimes sharp words—significant aspects of national conciousness. They reflect the part that all Americans—black and white, native born and immigrant, Hispanic, Asian, and Native American, poor and wealthy—have played in creating the nation's character.

"Here in a single rich volume are the classic texts that evoke America in both its wondrous diversity and its abiding centrality of purpose." — Arthur Schlesinger, Jr.

"Far more than a marvelous collection of text and images, Ravitch's anthology is also a journey through the American democratic experience. And by showing us the contributions diverse Americans have made to articulating our common democratic ideals and to our efforts to live up to them, Ravitch has provided a sourcebook of unity for our 'teeming Nation of nations.'" — Albert Shanker, former president, American Federation of Teachers

"Patriotic in the best and broadest, nonpartisan, and large-spirited sense." — Booklist

"The American Reader is a splendid collection of the words and sentiments that have shaped our nation. It belongs in every American home." — E.D. Hirsch, author of Cultural Literacy