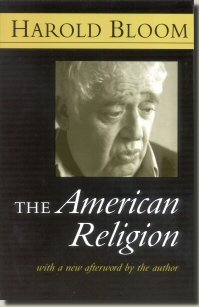 In this fascinating work of religious criticism, Harold Bloom examines a number of American-born faiths: Pentecostalism, Mormonism, Seventh-day Adventism, Christian Science, Jehovah's Witnesses, Southern Baptism and Fundamentalism, and African American spirituality. He traces the distinctive features of American religion while asking provocative questions about the role religion plays in American culture and in each American's concept of his or her relationship to God. Bloom finds that our spiritual beliefs provide an exact portrait of our national character.  First published by Simon & Schuster in 1992, this paperback edition has a new afterword by the author.

"This is the most important book on American religion in a long time.... [It] is an enormous help to anyone who would understand our contemporary spiritual condition." — Robert N. Bellah, New Oxford Review

"I found this an amazing book: dazzling in its insights, provocative in its thesis, and often very, very funny in its observations. Not since D. H. Lawrence's Studies in Classic American Literature have I read a work on American civilization so penetrating and so exciting." — Edward T. Oakes, Commonweal

"Brilliantly successful.... Bloom exposes, as scarcely anyone has before, an eccentricity at our spiritual center." — Washington Post

"A novel analysis of the American soul...insightful and pungent." — The New York Times

"[A] provocative study of the innermost meanings of religion over two centuries of American culture." — Los Angeles Times

"Bloom wanders a bit, away from Yale into 'the Evening Land' of America and its churches — and reconstructs a remarkable diagram of the religious imagination. As a literary critic, Bloom has shown an increasing fascination of late with scriptural texts and religious imagery (The Book of J, 1990; Ruin the Sacred Truths, 1988). Here, he attempts to go one step further and provide an exegesis of the religions themselves, concentrating on those sects—Mormons, Shakers, Southern Baptists, etc.—whose origins are particularly rooted in American history and American patterns of thought.... Bloom celebrates this Promethean refashioning, but as a religious critic he is equally sensitive to the contradictions it engenders.... A great bolt of originality: Bloom manages to wade into a hopelessly over-explored territory and point out precisely those landmarks that everyone else has missed. Remarkable ideas remarkably set forth." — Kirkus Reviews