The Benefit and the Burden

Tax Reform—Why We Need It and What It Will Take 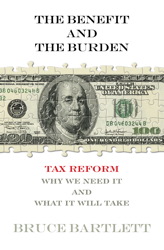 Tax reform is arguably the most overdue political debate facing America. The United States Tax Code has undergone no serious reform since 1986. Since then, loopholes, exemptions, credits, and deductions have distorted its clarity, increased its inequity, and frustrated our ability to govern ourselves.

At its core, any tax system is in place to raise the revenue needed to pay the government’s bills. But where that revenue should come from raises crucial questions: Should our tax code be progressive, with the wealthier paying more than the poor, and if so, to what extent? Should we tax income or consumption or both? Of the various ideas proposed by economists and politicians—from tax increases to tax cuts, from a VAT to a Flat Tax—what will work and won’t? By tracing the history of our own tax system and by assessing the way other countries have solved similar problems, Bartlett explores the surprising answers to all of these questions, giving a sense of the tax code’s many benefits—and its inevitable burdens.  While framing the various tax philosophies that dominate the debate, Bartlett explores the distributional, technical, and political advantages as well as the costs of various proposals.

"His analysis of tax burdens and policies in modern times is essential reading for anyone following the present debate about income inequality and taxation." — Worth

"America’s tax system is a mess. It is unfair, poorly understood and riddled with loopholes. It is ill-equipped to raise the revenues needed to deal with the debt crisis, still less the future needs of an aging population. It is now over 25 years since it last underwent much reform. An overhaul is long overdue. The case for change is presented in The Benefit and the Burden, a succinct, lucid book by Bruce Bartlett…. This is a provocative book and its recommendations – not least the suggestion that the US seeks inspiration from European welfare states – will infuriate some readers…. It is remarkably successful in interweaving the underlying economics of the US tax system with the political choices that have made it what it is." — Vanessa Houlder, Financial Times

"A great introduction for anyone who doesn't really know much about the U.S. tax system and wants to learn the basics. It's clear, short, and a quick read." — Kevin Drum, Mother Jones

"In a political system beset by ignorance and misinformation, delivering basic information to interested citizens is a worthy goal. And Bartlett does it very well." — Joseph J. Thorndike, Tax Notes