The Bright Book of Life

Novels to Read and Reread 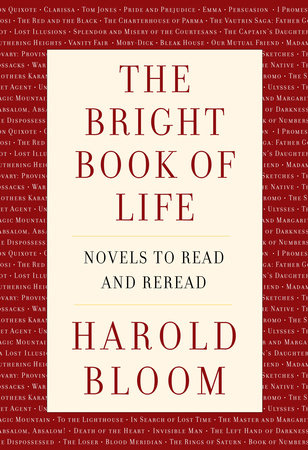 “The novel is the one bright book of life. Books are not life. They are only tremulations on the ether. But the novel as a tremulation can make the whole man alive tremble. Which is more than poetry, philosophy, science, or any other book-tremulation can do.”—D.H. Lawrence, “Why the Novel Matters”

Perhaps no other literary critic but Harold Bloom could—or would—undertake a project of this immensity, and certainly no other critic could bring to it the extraordinary knowledge, understanding, and insight that are the hallmark of Bloom's every book. Ranging across centuries and continents, this final book of his career, gives us the inimitable critic on Don Quixote and Book of Numbers; Wuthering Heights and Absalom, Absalom; Les Miserables and Blood Meridian; Vanity Fair and Invisible Man; The Captain's Daughter and The Reef. He writes about works by Austen, Balzac, Dickens, Tolstoy, James, Conrad, Lawrence, Wolff, Le Guin, Sebald, and many more. Whether you have already read these books, or intend to, or simply care about the importance and power of fiction, Harold Bloom serves as an unparalleled guide through the pages of these 52 masterpieces of the genre.

"Here’s what The Bright Book of Life isn’t: It isn’t a handy list of the 50 or 100 novels 'you must read before you die.' Nor is it a collection of painless expositions of 'the world’s greatest works of fiction.' Nor is it an introduction to the world’s greatest writers. It’s a series of meditations on what Bloom believes to be the most important novels we have, and it takes for granted that its readers already know the books under consideration; in other words, that they have already absorbed 'the canon,' and are eager to reconsider it later in their lives. For those with the rage for reading and rereading, it is something of a feast; for others, it will be daunting." — Robert Gottlieb, The New York Times Book Review  (Read the full review)

"Harold Bloom needs no introduction as one of America’s greatest literary critics. It is thus an understatement to name his posthumously published collection, The Bright Book of Life: Novels to Read and Reread, a true treasure of literature. That he was working on this in his final days is evident from the repeated mention of his age of 88 and from several comments throughout about death and dying. But what is The Bright Book of Life and who is it for? The Bright Book of Life is the reflection of a lifetime of reading from a great, deep, exhaustive reader of novels. Bloom gives a final assessment and ranking of his most beloved novels and distils his comments into a series of 48 mini-essays on 48 novels presented chronologically…. So why would anyone spend their time reading a book about reading other books? Well, new readers will appreciate The Bright Book of Life as a touchstone for a superb reading list with Bloom’s prose commentary to add some flashes of insight to their reading. Seasoned readers will enjoy filling in the gaps in their own reading or dusting off forgotten favorites with Bloom there to highlight a few passages and, along the way, add an unforgettable nugget or two about the work. The Bright Book of Life is a work worth dipping into again and again and following along with Bloom and his lifetime of reading the best of the best novels." — Shelby Smoak, New York Journal of Books  (Read the full review)

"With his unparalleled expertise in poetry of the modern British and American traditions paired with his fading health, Bloom knew all too well that the candle burns brightly at both ends.... Everything was an allusion for Bloom in the end, yet nothing – especially not the wisdom of literature – was wholly illusory. In Take Arms against a Sea of Troubles and The Bright Book of Life, he shows his readers how even literary criticism must be decoded like a dramatic poem or a novel before we can consume it, straight-up, as a sharp and sometimes bitter history of the writer. The final philosophical paradox of Harold Bloom’s oeuvre is that we are all collectively made and individually disclosed by our literary sources." — Eileen M. Hunt, The Times Literary Supplement  (Read the full review)

"An erudite critic recounts the pleasures of rereading. In his latest posthumous literary memoir, eminent critic and scholar Bloom remarks on the fresh insights and renewed joys that awaited him when, nearing the end of his life, he reread 48 novels. Organized chronologically—from Don Quixote, published in 1615, to Joshua Cohen’s Book of Numbers, published 400 years later—the essays often contextualize Bloom’s readings: when, where, and why he read certain novels; what teachers and readings enriched his perceptions; and how his responses changed or remained consistent over time. Although he read Moby-Dick as a child and Dickens as a young teenager, Bloom mostly read poetry before becoming obsessed, as he puts it, with Thomas Hardy at the age of 15; through Hardy, he found his way to D.H. Lawrence, Virginia Woolf, and E.M. Forster. Bloom’s selections draw heavily on the Western canon, mostly British and European writers, including Samuel Richardson, whose Clarissa Bloom reread every other year; Jane Austen, whose Persuasion, Emma, and Pride and Prejudice all 'seem equally grand'; Stendhal, whose 'vision of life is rather like a masked ball or a carnival performance'; Dostoevsky, Tolstoy, and Thackeray, whose Vanity Fair Bloom first read just before starting college at Cornell. Bloom admits to having read 'only twelve' of Balzac’s novels, and of Wharton’s novels, he writes about the 'sinuous and disturbing' The Reef rather than her better known The House of Mirth. A fervent admirer of Ursula Le Guin, to whom the volume is dedicated, he commemorates their brief but intense epistolary friendship. He candidly analyzes what he considers a novel’s shortcomings and where he differs with other critics’ assessments. Bloom’s ardent celebration of novels is tinged with the inevitable losses of old age: illness, physical diminishment, and the deaths of friends, mentors, and colleagues. Other novels under consideration include Tom Jones, Ulysses, The Magic Mountain, To the Lighthouse, and Blood Meridian. Warm recollections of a singular literary life." — Kirkus Reviews  (Read the full review)

"Bloom’s final books reflect one of the most personal and distilled versions of the moral code that sustained his idea of poetic thinking as the highest path to universal truth.... It is not difficult to see why this belief, which Bloom has repeated in one way or another for decades, has found so much resonance outside the academy, where there is still a community of readers seeking truth and solace in reading." — Ignacio M. Sánchez Prado, Los Angeles Review of Books  (Read the full review)

"This bright book of literary commentary is iconic, often controversial literary critic Bloom's final work, it's still a first for him in its strict focus on narrative fiction. It swoops through 52 masterpieces from Miguel de Cervantes's Don Quixote to Ralph Ellison's Invisible Man." — Library Journal

"Harold Bloom was one of the leading critics of his generation, and there is no question about his erudition. It is on full display in the posthumously published The Bright Book of Life as he examines 'novels to read and reread,' from Cervantes’s Don Quixote to Joshua Cohen’s Book of Numbers." — Wendy Smith, The Washington Post