The Cave and the Light

Plato versus Aristotle, and the Struggle for the Soul of Western Civilization 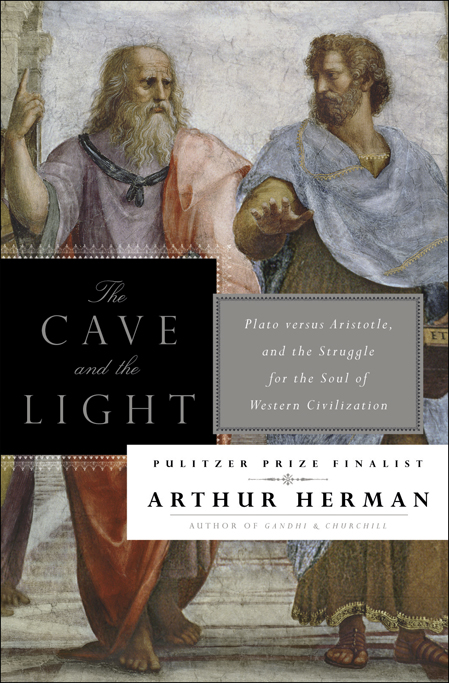 Arthur Herman has written a magisterial account of how the two greatest thinkers of the ancient world, Plato and Aristotle, laid the foundations of Western culture—and how their rivalry shaped the essential features of our culture down to the present day.

Plato came from a wealthy, connected Athenian family and lived a comfortable upper-class lifestyle until he met an odd little man named Socrates, who showed him a new world of ideas and ideals. Socrates taught Plato that a man must use reason to attain wisdom, and that the life of a lover of wisdom, a philosopher, was the pinnacle of achievement. Plato dedicated himself to living that ideal and went on to create a school, his famed Academy, to teach others the path to enlightenment through contemplation.

However, the same Academy that spread Plato’s teachings also fostered his greatest rival. Born to a family of Greek physicians, Aristotle had learned early on the value of observation and hands-on experience. Rather than rely on pure contemplation, he insisted that the truest path to knowledge is through empirical discovery and exploration of the world around us. Aristotle, Plato’s most brilliant pupil, thus settled on a philosophy very different from his instructor’s and launched a rivalry with profound effects on Western culture.

The two men disagreed on the fundamental purpose of philosophy. For Plato, the image of the cave summed up man’s destined path, emerging from the darkness of material existence to the light of a higher and more spiritual truth. Aristotle thought otherwise. Instead of rising above mundane reality, he insisted, the philosopher’s job is to explain how the real world works, and how we can find our place in it. Aristotle set up a school in Athens to rival Plato’s Academy: the Lyceum. The competition that ensued between the two schools, and between Plato and Aristotle, set the world on an intellectual adventure that lasted through the Middle Ages and Renaissance and that still continues today.

From Martin Luther (who named Aristotle the third great enemy of true religion, after the devil and the Pope) to Karl Marx (whose utopian views rival Plato’s), heroes and villains of history have been inspired and incensed by these two master philosophers—but never outside their influence.

"Like many an engineer who got nary a whiff of a liberal education, I've spent the last 35 years trying to make up for it through my own reading. Charting a course through history, economics, and literature has been relatively easy. But making sense of the conflicting schools of philosophy without a road map has been vexing—until the right book came along to finally help put all the pieces in place. That book, The Cave and the Light: Plato Versus Aristotle and the Struggle for the Soul of Western Civilization by Arthur Herman, should be standard reading in every Philosophy 101 course, and on the short list of 'must read' books for any educated adult. Herman lays out the competing dynamic between Plato's mysticism and Aristotle's empiricism, which has driven over 2,300 years of history.For the first of these 900 years, the Schools of Athens laid the foundation of Western thinking, with Plato's Academy becoming the model for every monastery, university, and totalitarian regime. Meanwhile, Aristotle’s legacy bequeathed to us capitalism, the scientific method, and the American Revolution. As history has ebbed and flowed, we've seen the influence of each school wax and wane. Plato's theory of decline and yearning for a vanished utopia informed the inward turning of European societies following the collapse of the Roman Empire—'the Cave'—while Aristotle’s faith in human potential and vision for continual progress fueled the Renaissance and Enlightenment—'the Light'. Along the way, Herman lays out the contributions of subsequent philosophers, who echoed one or the other of these themes, both through their teachings and through the deeds of the societies that embraced them. One of the book's most important threads is the impact these two schools had on the evolution of Christianity, including the Catholic Church's efforts to harmonize faith and reason and the relative importance of good works in this life vs. entry into the next. The balance tips back and forth from Augustine to Aquinas, culminating in the rupture of the Protestant Reformation, before we are carried through to Max Weber and the Protestant work ethic. But this is no dry pedantic tome! Herman makes the journey fun, as he weaves a captivating narrative of thought and action and puts the ethos of the key players in historical context. His treatment of Aristotle's greatest student, the scientist-warrior Archimedes, comes to life in his account of the epic defense of Syracuse, complete with monstrous war machines plucking Roman ships into the air and tossing them about like toys. Might there be a Hollywood blockbuster waiting to be made here? But the heart and soul of the book, providing enough food for thought to last a lifetime, is the contrast of Platonic excess and Aristotelian hubris. The former gave us not just sublime art, but also tyrants from Robespierre to Adolf Hitler. The latter gave us not only Adam Smith and the industrial revolution, but also the atom bomb. Herman's delineation of the difference between a subjective reality crafted by elites, vs. an objective reality informed by direct observation is punctuated by a brilliant quote from Benito Mussolini: 'It is not necessary that men move mountains, only that other men believe they moved them.' Thus, Plato’s 'noble lie' through which rulers control producers leads to Josef Goebbels’s 'big lie.' While it's clear that the author is a champion of Aristotle's reason, liberty, and Athenian democracy against Plato's call to faith, Spartan obedience, and rule by philosopher-kings, he sounds an important warning about the 'fatal conceit,' to which Aristotle's heirs often succumb, citing the work of F. A. Hayek, an important thinker though not normally included in the pantheon of philosophers. 'The curious task of economics is to demonstrate to men how little they really know about what they imagine they can design.' And then at the end of the book, rather than indulge in a bout of Aristotelian triumphalism, Herman leaves the door open for Plato's leavening influence. Perhaps Herman believes there really is something ineffable out there—or he has taken to heart the advice of Voltaire, who did not believe in God but hoped his valet did 'so he won’t steal my spoons.' Read it yourself and be the judge." — Bill Frezza, Forbes

"Mr. Herman is one of those writers whose appetite for ideas and command of narrative drama make them a companionable guide through the thickets of intellectual history. Often, as in How the Scots Invented the Modern World, he advances a bold thesis that readers can take or leave without diminishing their enjoyment of the story he unfolds. In The Cave and the Light, he seeks to explain the metabolism of history with a single master idea: the perpetual struggle or ‘creative tension’ between the ideas of Plato—which he says emphasize the ideal at the expense of the actual—and those of Aristotle, whose philosophy remains rooted in experience and everyday life…. Mr. Herman is an able storyteller, and his many vignettes are entertaining and often illuminating." — Roger Kimball, The Wall Street Journal

"The author of Freedom's Forge returns with a sweeping intellectual history viewed through two ancient Greek lenses. Herman, who has taught history at an assortment of universities, whips his thesis for all it’s worth—which is considerable. After telling us the little that’s known of the biographies of his principals, he marches steadily forward through the history of philosophy and culture, showing how Plato’s 'Allegory of the Cave' and his beliefs about our imperfect knowledge and about ideal government have waxed and waned, inspiring great art, noble theories and, in ways, totalitarian governments. He does the same for Aristotle, noting the ways his approach to the world has led to tremendous advances in science and technology, as well as egregious excess. 'This book will show that Plato and Aristotle are alive and all around us,' he writes. 'Their influence is reflected in every activity and in every institution…as well as on the Internet. They have taken us to the moon and probed the innermost secrets of the human heart.' Throughout, the author sprinkles allusions to contemporary events and popular culture, from Playboy to The Da Vinci Code to the Kardashians. (Sometimes he alludes to things long gone on the popular radar—Dragnet, for example.) On the journey, we meet just about every notable in intellectual history and learn how, in the author’s view, they leaned toward (or antedated, learned from or rejected) the two long-gone Greeks. Heraclitus, Pythagoras, Epicurus, Cato, Cicero, Abelard, Aquinas, Machiavelli, Michelangelo, Luther, Calvin, da Vinci, Bacon (Roger and Francis), Locke, Rousseau, Byron, Coleridge, Darwin—these and countless others dance in the bright light of Herman’s narrative beam. Herman’s own preferences quietly emerge now and then. He appears to embrace the value of a spiritual life and has some unhappy words for Karl Marx. Breezy and enthusiastic but resting on a sturdy rock of research." — Kirkus Reviews

"This book is unfashionably ambitious history, with a sweep and drama worthy of Arnold Toynbee. It tells the story of Western civilization––a term Arthur Herman uses without irony—as an ongoing struggle between the philosophies of Athens's giants, Plato and Aristotle. The rivalry of their worldviews, manifesting itself in different nations and across time, has given the West its unequaled spiritual and scientific dynamism, says Herman…. Like Herman's earlier histories, which include the classic How the Scots Invented the Modern World, The Cave and the Light displays the author's impressive erudition and his clear and forceful style…. Herman has given us a wonderful introduction to the intellectual history of the West. In a saner era, it would be on every college freshman's reading list." — Brian C. Anderson, National Review

"Herman sets out to show that the debate between these two thinkers, who lived about 400 years before the birth of Jesus Christ, provides the distinctive, even governing, feature of Western civilization.... An engaging distillation of much of the intellectual ferment that has taken place over the last 2,400 years. His vignettes touch on important, often forgotten, personalities and events in Western culture that readers—and students in classrooms around the country—might not encounter otherwise.... It’s at least a one-volume bibliography for much of the best that has been thought and said in the Western heritage. Herman tells readers of the enormous influence that Plato and Aristotle had over Western culture, a reminder that many students might never hear in a contemporary academic setting." — Joel Gehrke, The Federalist

"In his sweeping new book, historian Herman contends that Plato and Aristotle had vastly different conceptions about the world, and that the various followers and interpreters of each thinker, throughout the ages, shaped the course of Western civilization. According to Herman, Plato views ‘the world through the eyes of the artist and religious mystic,’ using intuition and ideals to understand the workings of the world, while Aristotle ‘observes reality through the... eyes of science,’ using reason and logic as guides. Beginning with biographies of each thinker and unusual facts, the book traces the rise and fall of their respective philosophies. While Plato was dominant in the ancient world, with St. Paul linking the philosopher’s idea of the forms to early Christianity, Aristotle, through Thomas Aquinas, was prominent in the Middle Ages. While Aristotle’s authority caused science to stagnate in the Middle Ages, Plato’s ideas—especially those described in The Republic—were sometimes used to justify totalitarianism, influencing 20th-century communism, fascism, and Nazism. Examining mathematics, politics, theology, and architecture, the book demonstrates the continuing relevance of the ancient world." — Publishers Weekly