Timeless Lessons for the Issues of Our Era 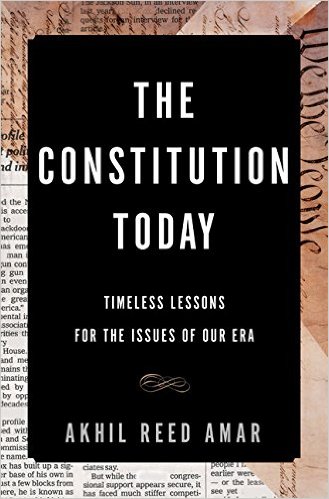 In The Constitution Today, Akhil Reed Amar, America’s preeminent constitutional scholar, considers the biggest and most bitterly contested debates of the last two decades and provides a passionate handbook for thinking constitutionally about today’s headlines. Amar shows how the Constitution’s text, history, and structure are a crucial repository of collective wisdom, providing specific rules and grand themes relevant to every organ of the American body politic. Prioritizing sound constitutional reasoning over partisan preferences, he makes the case for diversity-based affirmative action and a right to have a gun in one’s home for self-protection, and against spending caps on independent political advertising and bans on same-sex marriage. He explains what’s wrong with presidential dynasties, advocates a “nuclear option” to restore majority rule in the Senate, and suggests ways to reform the Supreme Court. And he revisits three dramatic constitutional conflicts—the impeachment of Bill Clinton, the contested election of George W. Bush, and the fight over Barack Obama’s Affordable Care Act—to show what politicians, judges, and journalists got right as events unfolded and what they missed.

Leading readers through the particular constitutional questions at stake in each episode while outlining his abiding views regarding the Constitution’s letter, its spirit, and the direction constitutional law must go, Amar offers an essential guide for anyone seeking to understand America’s Constitution and its relevance today.

"Originally published as op-ed, columns, and news commentary, the essays engage a general readership on controversial issues ranging from the contours of executive power to recent convulsions in the culture wars. Expanded and thematically organized, the essays are compelling for what they have to say. And they are important for the very fact that Professor Amar has the intellectual fortitude and scholarly conviction to publish them.… The essays here are unapologetically and refreshingly opinionated. Moreover, Amar supports his opinions with the scrupulous attention to method and evidence that only a scholar of his caliber could muster…. The Constitution Today hits hard; what is more, it dares the reader to hit back. In this regard, it showcases scholarship fulfilling its greatest potential: engaging meaningfully and unflinchingly with the world beyond the university in terms intelligible to the layperson. To be sure, Amar is a powerful intellectual force within the academy, where his work on constitutional history continues to shape our understanding of the Bill of Rights. He is also an authority within the legal profession, where his scholarship is routinely cited by the Supreme Court. But these essays showcase Amar's influence in a different way, reflecting the capacity of a serious scholar and gifted teacher to educate an audience beyond the lecture hall-to distill complex constitutional questions into terms accessible to inquisitive citizens." — Tara Helfman, The Weekly Standard

"I don’t think there is anyone in the academy these days capable of more patient and attentive reading of the constitutional text than Akhil Amar. When that close reading is allied with the kind of thoughtfulness that we find in his Fourth Amendment discussion, it is a formidable resource. When it becomes an object of reflection in itself—why have we committed ourselves to a text in this way?—it produces deep insight into the possibilities and paradoxes of an enduring constitutionalism." — Jeremy Waldron, The New York Review of Books

"Impressively, Amar presents a panoramic view of recent history through the lens of Constitutional interpretation. Moreover, he accomplishes this in layman’s language, so that his insights are accessible to general readers. Indeed, Amar’s professed intent is to educate journalists on Constitutional issues, and he succeeds unequivocally, explaining what’s at stake in landmark cases such as Bush v. Gore and Citizens United, while commenting on the constitutionality of the Second Amendment and the exclusionary rule." — Library Journal (starred review)

"From a constitutional law expert, 20 years’ worth of essays on controversial issues that have dominated the headlines…. Believing there are right and wrong answers to constitutional questions and convinced that the correct judgment usually emerges over time, Amar rigorously analyzes each issue in accessible prose, with humor and humility. He forthrightly confesses his bias as ‘a card-carrying Democratic scholar,’ but instances abound here—on gun rights, on the exclusionary rule, on campaign finance—where the conclusions he’s reached appear to cut against his political preference. This insistence on playing fair—his willingness to, for example, praise Antonin Scalia or criticize Stephen Breyer (for whom he clerked) when the occasion demands—is one of this book’s many charms, lending credence to the sharp scrutiny the professor applies to every topic and to the predictions he makes about the course of constitutional law. Bringing an unusually informed and cool head to the tumult accompanying unfolding events, Amar performs a valuable service for his fellow citizens." — Kirkus Reviews (starred review)

"Amar is at his best when providing historical insights to modern-day constitutional issues…. What his new book exemplifies is a consistent commitment over two decades to speak to issues beyond the academic, to engage with audiences beyond a New Haven classroom, and to use the perch and resources of his academic appointment to help the rest of us learn more about the history and principles that guide us today." — Laura W. Brill, Los Angeles Review of Books

"If I were stranded in a remote area and could have only one book to read, that book would be written by Akhil Reed Amar—any Amar book. Each one is filled with thoughtful examinations of the United States Constitution. His most recent book is designed to give readers a sufficient understanding of the Constitution so they can hold their own in discussions of matters constitutional." — Michael L. Ramsey, The Roaknoke Times

"America’s most brilliant originalist constitutionalist is also perhaps her best constitutional journalist. In this beautifully written collection, Akhil Amar brings the words of our framers forward, with wit and care, makes it easy for anyone to understand their wisdom and flaws, as he maps our constitution onto the culture of modern American politics." — Lawrence Lessig

"Akhil Amar’s compelling and readable new book is so cram-filled with provocative and ground-breaking ideas that no one will agree with them all. I, for one, couldn’t disagree more with his opposition to exclusionary rules. But every reader will acknowledge the cogency of his arguments. He makes you think, reconsider your ideas and admire his sheer brilliance." — Alan Dershowitz

"Is our fundamental law putty in the hands of lawyers? Akhil Amar, self-described liberal originalist, hopes not. He believes the Constitution means something, and he wants to know what that is. When I disagree with him, he would no doubt answer, as he writes here, with good temper, wit and immense erudition." — Richard Brookhiser