The Life and Tumultuous Times of Pat Buchanan 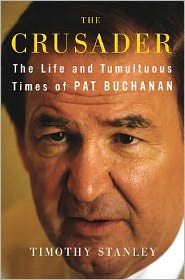 Pat Buchanan is one of America’s most controversial conservative rebels. After loyally serving Nixon and Reagan, he led a revolt against the Republican establishment that was a forerunner for the Tea Party. He tried to take away his party’s nomination from the incumbent president and set the tone for political debate for the next two decades when he declared a “cultural war.” His radical, rollicking presidential campaigns tore apart the GOP and articulated the ideals of a new generation of conservatives.  Former U.K. Labour Party candidate Timothy Stanley tells the intimate story of the man who defined the culture war for a generation of Americans with outrage and wit. This is the definitive biography.

"An engrossing look inside an ultra-conservative mind." — Kirkus Reviews

"Drawing on interviews with Buchanan’s friends, colleagues, and adversaries and with Buchanan himself, Stanley highlights the strongly held beliefs that helped launch the culture wars that sharply contrast the visions of religious, Republican conservatives and secularist, Democratic liberals. Stanley details Buchanan’s career trajectory, his rambunctious candidacies, frustration with the Republican Party, and enduring influence on a new generation of conservative Republicans." — Booklist