From Victorian Virtues to Modern Values 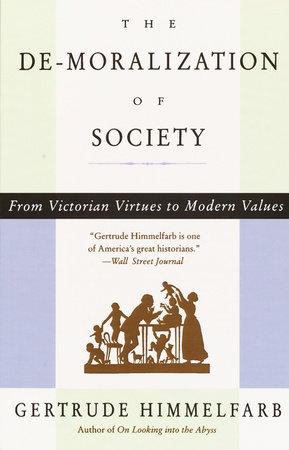 As the debate over values grows ever more divisive, one of the most eminent historians of the Victorian era reminds readers that values are no substitute for virtues–and that the Victorian considered hard work, thrift, respectability, and charity virtues essential to a worthwhile life.

"Himmelfarb, professor emeritus of history at CUNY and the author of several works on Victorian England, including most recently Poverty and Compassion: The Moral Imagination of the Late Victorians, here contrasts the Victorian ‘virtues’ of respectability, self-help, orderliness, cleanliness, and obedience with today's vague concept of ‘values.’ The author debunks the popular perception of Victorians as repressed and materialistic. Instead, according to Himmelfarb, their ‘manners and morals’ created a society that emphasized a strong family life for all classes and gave rise to a prosperous economy and the early feminist and social service movements. Furthermore, the influence of these virtues caused the incidence of illegitimate births and violent crimes to drop significantly and remain low until the 1960s. This provocative and important book is recommended for all academic and large public libraries." — Kathryn Moore Crowe, Library Journal

"This is intellectual history and historically-based argument as good as they get." — Booklist

"Although Himmelfarb concedes that Victorian England was rife with class rigidity, discrimination and hypocrisy, she nevertheless believes Victorian society has much to teach us because it preserved a core of ‘virtues’ such as hard work, self-reliance and deferral of gratification. The compartmentalization of the sexes into separate spheres of activity in that era was more flexible than is generally acknowledged, she argues, pointing to women's involvement in social work, education, government and philanthropy. Professor emeritus of history at the City University of New York, Himmelfarb draws on oral histories, memoirs, newspapers and the writings and personal behavior of William Gladstone, John Stuart Mill, Anthony Trollope, H.G. Wells, Oscar Wilde and others to bolster her arguments. Her challenging study urges liberals and conservatives to move beyond moral relativism in addressing such problems as crime, illiteracy, poverty, welfare and substance abuse." — Publishers Weekly