The Death and Life of the Great American School System

How Testing and Choice Are Undermining Education 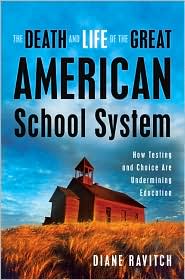 Diane Ravitch, the nation's foremost historian of education, warns that national education policy is on a path to wrecking our cherished tradition of public education.  In this remarkable book, she describes how such strategies as accountability schemes based on questionable standardized tests, merit pay for teachers based on gains on the same unreliable tests, vouchers, and charter schools have been oversold as solutions for our educational problems. Ravitch explains why she became persuaded by accumulating evidence that policymakers are on the wrong track in pushing a market model of reform that ignores the realities of the classroom. The more they push these policies, she writes, the more they will harm our nation's school system and undermine the quality of education.

Ravitch shows how President George W. Bush's No Child Left Behind program ("NCLB") has failed to improve education. The main result of NCLB has been to turn our schools into testing factories. While children are trained to take standardized tests, they do not gain the knowledge and skills that are necessary components of a good education.  The federal "sanctions" and "remedies" now mandated across the nation have unfairly stigmatized thousands of schools and put them at risk of being closed and privatized. The Obama administration has now adopted the same approach as the George W. Bush administration, despite the lack of evidence that these "reforms" will improve the quality of education.

Ravitch reviews the record of districts that claim to have achieved "miracles," and finds that the alleged "miracles" vanish on close examination. Not only are test scores in many states and districts inflated by statistical game-playing and lowered standards, but the over-emphasis on testing has all but eliminated the essential elements of a solid education, including history, civics, science, the arts, geography, literature, physical education, health education, and foreign languages.

Ravitch shows that privatization and deregulation of schools solve no problems. Charter schools choose their students in lotteries, then have the freedom to exclude (or "counsel out") those who don't test well. Many do not accept a fair share of students with disabilities and those who are English language learners. The regular public schools, by contrast, have to educate everyone. Meanwhile, many charter managers pay themselves handsomely for their services.  Ravitch demonstrates that charters on average do not get better results than regular public schools.

The currently fashionable idea that teachers should be evaluated by their students' test scores, Ravitch finds, is wrongheaded. She explains that the research for this proposition is deeply flawed. The main consequence of this approach, now a keystone of the Obama administration education plan, will be to drive good teachers out of public education.

Ravitch argues that what is at stake is nothing less than the future of public education, especially in our urban districts. Every student should have a solid, well-balanced education that prepares them for the future. A democratic society, she concludes, needs a healthy, vibrant public education system, with good public schools in every neighborhood. On our current course, the schools will be privatized, deregulated, and turned over to entrepreneurs. Based on a careful review of the evidence, Ravitch says that this course of action is unlikely to improve American education.

This is a classic and riveting story of good intentions gone terribly wrong.

"As an education historian and former assistant secretary of education, Ravitch has witnessed the trends in public education over the past 40 years and has herself swung from public-school advocate to market-driven accountability and choice supporter back to public-school advocate. With passion and insight, she analyzes research and draws on interviews with educators, philanthropists, and business executives to question the current direction of reform of public education…. For readers on all sides of the school-reform debate, this is a very important book." — Booklist (starred review)

"Diane Ravitch, probably this nation's most respected historian of education and long one of our most thoughtful educational conservatives, has changed her mind -- and changed it big time. Ravitch's critical guns are still firing, but now they're aimed at the forces of testing, accountability and educational markets, forces for which she was once a leading proponent and strategist…. THE DEATH AND LIFE OF THE GREAT AMERICAN SCHOOL SYSTEM may yet inspire a lot of high-level rethinking. The book, titled to echo Jane Jacobs' 1961 demolition of grandiose urban planning schemes, THE DEATH AND LIFE OF GREAT AMERICAN CITIES, has similarly dark warnings and equally grand ambitions." — Peter Schrag, Los Angeles Times

"An important and highly readable examination of the educational system, how it fails to prepare students for life after graduation, and how we can put it back on track…Anyone interested in education should definitely read this accessible, riveting book." — Library Journal (starred review)

"I think she is the most forceful voice right now speaking out for sane policy, and our public school system would be far better off if administration policy better reflected her research and concerns." — Valerie Strauss, Washington Post

"In an age when almost everybody has an opinion about schools, Ravitch’s name must be somewhere near the top of the Rolodex of every serious education journalist in this country." — The Nation

"The book intelligently and readably addresses today’s education controversies, using a combination of anecdotes, case studies, and statistics… it’s a must-read for education policymakers at all levels of government." — National Review

"Ravitch’s critique is an essential one – passionate, well considered and completely logical." — Time

"Ravitch is our best living historian of education. In my view she is the best ever." — Jay Matthews, Washington Post

"Diane Ravitch’s important new book, THE DEATH AND LIFE OF THE GREAT AMERICAN SCHOOL SYSTEM, will surely stir controversy, exactly as she intends. For it embodies and expresses—with her characteristic confidence, style and verve—a fundamental change in her views about where U.S. K-12 education should be heading." — Forbes

"Public education is a tough enterprise. It won’t be fixed overnight. But if we stick with a back to basics approach, saturated with the solid American democratic values that Ms. Ravitch advocates, we won’t be so prone to fall for the silver bullets that never seem to find their mark." — New York Sun

"No citizen can afford to ignore this brave book by our premier historian of education. Diane Ravitch shines a bright, corrective light on the exaggerated claims of school reformers on both the left and the right, and offers an utterly convincing case for abandoning quick fixes in favor of nurturing the minds and hearts of our students from the earliest years with enabling knowledge and values." — E.D. Hirsch, Jr., author of Cultural Literacy, The Schools We Need, and The Making of Americans

"Diane Ravitch is the rarest of scholars—one who reports her findings and conclusions, even when they go against conventional wisdom and even when they counter her earlier, publicly espoused positions. A ‘must’ read for all who truly care about American education." — Howard Gardner, Hobbs Professor of Cognition and Education, Harvard Graduate School of Education

"Diane Ravitch is one of the most important public intellectuals of our time. In this powerful and deftly written book, she takes on the big issues of American education today, fearlessly articulating both the central importance of strong public education and the central elements for strengthening our schools. Anyone who cares about public education should read this book." — Linda Darling-Hammond, Charles E. Ducommon Professor of Education, Stanford University, and Founding Executive Director, National Commission for Teaching & America's Future

"Ravitch, former assistant secretary of education with over 40 years of experience in educational policy, provides an important and highly readable examination of the educational system, how it fails to prepare students for life after graduation, and how we can put it back on track. Ravitch was once a passionate advocate for the conservative policies of testing and accountability, school choice, privatization, and business-style management, all of which she here powerfully shows leave students trained to take tests but not prepared to participate in the 21st-century economy. Changes she suggests include curricula that emphasize what students need to learn over test scores, having professional educators rather than politicians, business leaders, and philanthropists run the system, and using charter schools to help students most in need instead of allowing them to siphon off the best students from public schools. VERDICT: Anyone interested in education should definitely read this accessible, riveting book." — Mark Bay, Library Journal (starred review)