How Progressive Elites, Tribalism, and Globalization Are Destroying the Idea of America 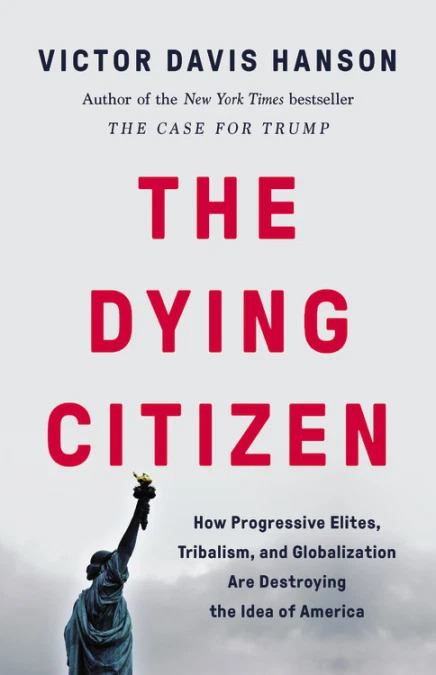 Most of human history is full of the stories of peasants, subjects, or tribes. The concept of the “citizen,” an idea we take for granted, is historically quite rare—and was, until recently, amongst America’s most profoundly cherished ideals. Now historian Victor Davis Hanson warns that American citizenship as we have known it for well over two centuries may soon vanish.

In The Dying Citizen, Hanson outlines the forces that have brought us to the twilight of American citizenship. Over the last half-century, numerous forces have conspired to undermine the value we place in the idea of citizenship—and our vigilance in protecting it.

To be self-governing, citizens must be economically autonomous, but the evisceration of the middle class and the rise of inequality have made many Americans dependent on the federal government. Citizenship exists within delineated borders, but open borders and the elite concept of “global citizenship” have rendered meaningless the idea of allegiance to a particular place. Citizenship relies on the renunciation of tribal identity in favor of the state, but identity politics have eradicated the idea of a collective civic sense of self. A vastly expanded unelected bureaucracy has overwhelmed the power of elected officials, thereby destroying the sovereign power of the citizen. Progressive academics and activists lay siege to the institutions and traditions of constitutional citizenship.

We must confront the fragility of citizenship and our complacency on the future of our most cherished ideals.  Hanson's timely book shows us America's future is at stake.

Winner of the 2022 Conservative Book of the Year Award
A New York Times Best Seller!

"Mr. Hanson, an accomplished classicist and a senior fellow at the Hoover Institution, is one of the great amalgamators of American political writing. He has a particular gift for bringing together a dizzying array of events, controversies and ideas and making sense of them by advancing a coherent argument that incorporates thousands of years of history.... Mr. Hanson hits hard, but I don’t find his analysis unfair or partisan. There is enormous value, moreover, in thinking about toxic political developments not as problems of the moment but as destructive pathologies to which all societies are prone at all times." — Barton Swaim, The Wall Street Journal  (Read the full review)

"Victor Davis Hanson’s The Dying Citizen weaves a rich definition of citizenship into his discussion of the current threats to this profoundly Western idea.... Hanson’s writing is invariably enlightening because of his remarkable blend of timeliness and erudition.... No other writer is this prolific and consistently penetrating." — Terry Scambray, American Thinker

"Hanson’s brilliant analysis and impeccable academic insights portends a future for our country that is both frightening and enlightening. He foresees the disappearance of the middle class as the country becomes more dependent on government and less committed to the ideals of the founders of our country.... Hanson has analyzed and synthesized the last two thousand years of human existence on the planet and has shown why the word ‘citizen’ is such a profound and important designation. He warns that we must restore the primacy of the American citizen because it is essential to the preservation of the American republic itself." — Donna Barnes, The Lehi Free Press

"Among public intellectuals writing within a secular framework about America’s troubles, Victor Davis Hanson towers above the rest. A renowned and now retired professor of classics at CSU-Fresno and a fifth-generation farmer in nearby Selma, CA, his encyclopedic knowledge of classical civilization has shed light on the vexing questions of politics and citizenship that now haunt contemporary America, in ways few can match; and his labors as a modest farmer give him an unusually deep understanding of the plight of the American middle class, which has been weakened by two generations of neglect, and now is in danger of expiring. No citizens, no polity; no middle class, no citizens. This is ancient wisdom, lived out in the 'red-state' Fresno area—a wisdom Hanson lays out calmly and meticulously in The Dying Citizen, as he watches our 250-year-old American political experiment with liberty falter." — Joshua Mitchell, First Things

"Indispensable.... [Hanson's] inspiriting book offers a most welcome corrective to those influential forces and doctrines in our midst that conspire to delegitimize the citizen and citizenship as such. In doing so, he provides us with hope that our society still has within it significant powers of rejuvenation." — Daniel J. Mahoney, National Review

"The Dying Citizen is essential reading for any American who cares about the fate of our nation." — Mark R. Levin

"In The Dying Citizen, Victor Davis Hanson shows once again why he is America's premier scholar, writer, and political observer. Drawing on his training as a classicist, and clearly informed by his deep personal experience living and farming in California's San Joaquin Valley, Hanson has written a tour de force on the history, rights, and responsibilities of modern citizenship, and the galaxy of forces that are undermining the concept of American citizenship today. Immensely enlightening but also deeply unsettling, The Dying Citizen is a wake-up call for our countrymen who want to preserve the American ideal for future generations." — Rep. Devin Nunes

"Victor Davis Hanson’s book is not a complaint nor a polemic but rather a fine-grained diagnosis of a very serious disease. Its symptoms are all around us: the fragmentation of America’s national identity by the assertion of not merely separate but separatist identities with the vehement support of the most privileged of all Americans. May this brilliant diagnosis lead us to a cure." — Edward N. Luttwak

"Once again Victor Davis Hanson has written a masterly account of a great public affairs crisis. He has given a learned history of the concept and indispensability in a democracy of responsible citizenship; has perceptively chronicled how it has been undermined in the US; how Donald Trump in his sometimes frantic way tried to revive it, and of the tense but not unhopeful current prospects. This book is a concise masterpiece that all serious citizens should read." — Conrad Black

"If you don’t believe that the survival of the American republic hangs in the balance, you must read Victor Davis Hanson’s relentless exposition of the facts. America’s free citizenry is at imminent risk of defeat at the hands of an unelected Deep State allied to a globalist elite that flouts American law with impunity and plans to jettison the Constitution. Even if you think you’re informed and alarmed about these trends, Hanson’s brilliant presentation will leave you much better prepared to address these dangers. Get this book into the hands of everyone you know." — David Goldman