The End of Sparta 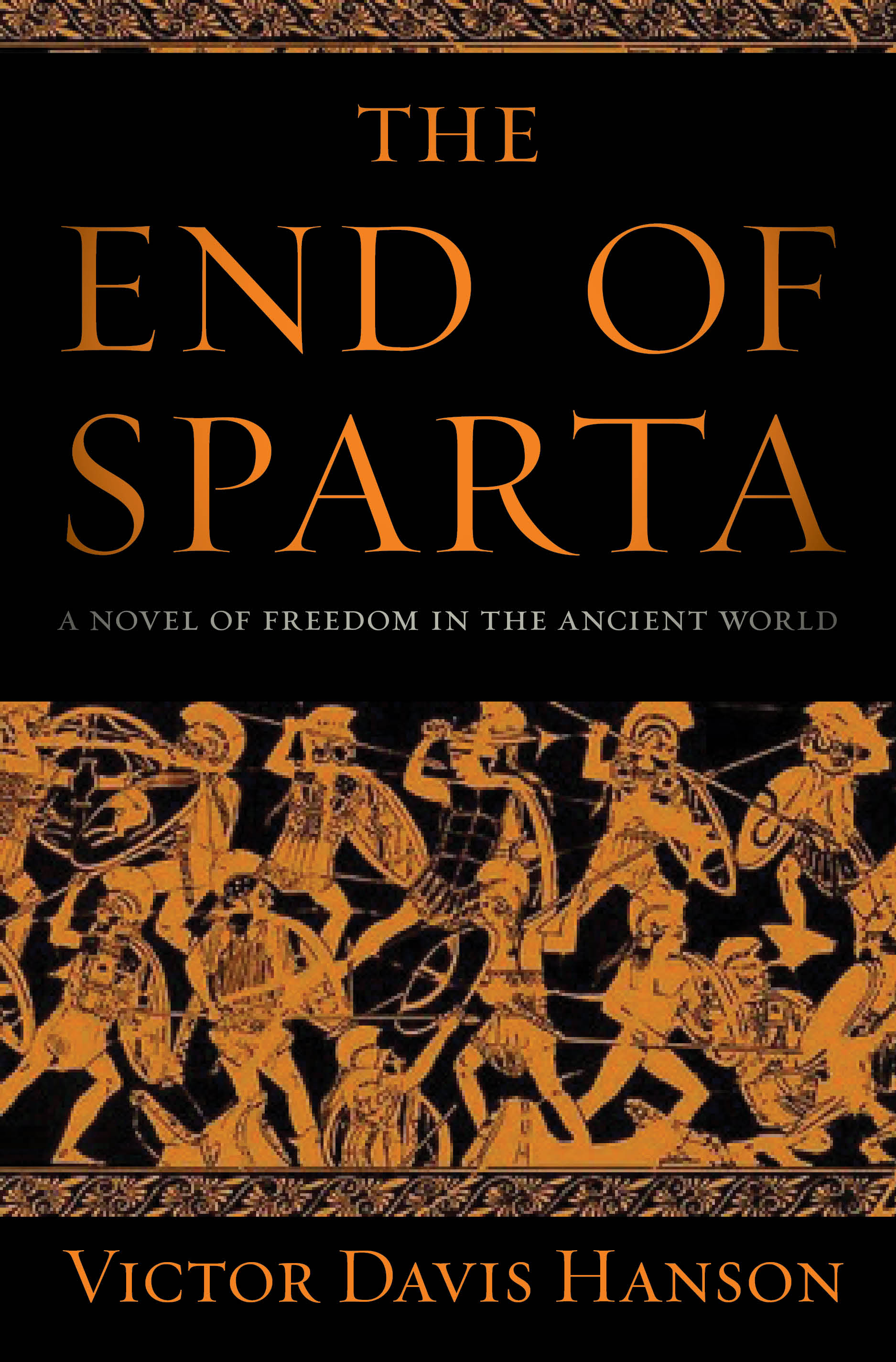 In this sweeping and deeply imagined historical novel, acclaimed classicist Victor Davis Hanson recreates the times and wars of one of the greatest generals of ancient Greece.

Though he is little-known today, the Greeks and Romans acclaimed Epaminondas of Thebes as the greatest man their worlds produced. In the pivotal battle of Leuktra (371 BC), Epaminondas led an army of Boiotian Greeks that shattered a larger—and far more feared—force from Sparta, the mighty city-state that had dominated Greece and held the people of Messenia in slavery for some two hundred years. The next year, the firebrand general led a coalition of Greeks that overran Sparta, brought the warrior state to its knees, and built democratic cities for Sparta’s former serfs.

We follow these epic historical events through the eyes of Mêlon, a farmer who has left his fields to serve with Epaminondas—swept up, against his better judgment, in the fever to spread democracy even as he yearns to return to his pastoral hillside.

With a scholar’s depth of knowledge and a novelist’s vivid imagination, Hanson recreates the ancient world down to its intimate details—from the weight of a spear in a soldier’s hand to the peculiar camaraderie of a slave and master who go into battle side by side. The End of Sparta is a stirring drama and a rich, absorbing reading experience.

"A brilliant look at the ancient world…. Having written extensively on the history of ancient Greece, it is no surprise that classics professor Victor Davis Hanson would set his first novel in that era. His new book, The End of Sparta is an intelligent and engaging work set in the mid-4th century B.C., when Theban general Epaminondas leads his army of Boeotian hoplites against the power of the Spartan hegemony over Greece…. Hanson's considerable intellectual skills are on display throughout this work…. The complexities of politics and society are explored brilliantly here, without weighing down the narrative. The characters are by turns sympathetic and cruel, and entirely believable…. Where Hanson really shines is in his description of hoplite warfare…. As can be expected from the subject matter, The End of Sparta is a violent book about a violent world. The novel also addresses sexual themes of the day, though neither the violence nor the sex comes across as exploitative or gratuitous. Rather, Hanson presents these things as the Greeks understood them—simply a part of life." — Deseret News

"Leading classicist Hanson focuses on the Theban defeat of the renowned Spartan army in 371 B.C.E. The hero of the tale is the Theban general Epaminondas, a devotee of Pythagoras and a warrior with unconventional attitudes about warfare, life, and death. His unexpected choices—not to mention the Spartan underestimation of the Theban 'pigs'—allow the Thebans to fulfill the prophecies of Sparta's downfall, many of which focus on the farmer Mêlon (meaning 'apple'), whose journey from reluctant soldier to enthusiastic liberator gives the novel its emotional heart. Battle scenes are conveyed in exacting detail; a glossary of names and numerous line diagrams help readers differentiate characters and envisage the sites of central dramas. Told in a somewhat elevated style that simultaneously honors and updates the rhetorical heights of classic Greek histories, Hanson's novel is both old-fashioned and lively. Given his notable body of work, it's no wonder that his first fiction effort is rich in authentic detail and narrated with a confident authorial voice. His vigorous narrative not only offers insight into arms and armor, but also into the hearts of the men who bore them." — Publishers Weekly

"Classicist, farmer and conservative commentator Hanson turns to fiction to tell the tale of Sparta's final days. Mêlon—his name means 'apple' in Greek, on which a bit of prophecy at the beginning of the novel turns—is a farmer from the district of Thespiai who lays down his plowshare and picks up a sword when the need arises. Epaminondas, the commander of the Theban forces, is mighty glad of it, too, for when Mêlon arrives at the battlefield of Leuktra, he is the moral equivalent of 1,000 men: 'The presence of Mêlon, the apple, would win over the hesitant horsemen and the scared farmers and the ignorant tanners and potters as well.'... Mêlon is a fellow who knows his business on the battlefield, a philosophical soul who reflects that war 'is the great torch that brings such heat and light to everything and everyone.' Yet he isn't quite certain about Epaminondas' program of freeing the slaves—the helots, or 'seized ones'—of Sparta, which seems a touch radical to him. No matter: Mêlon is a good soldier, and he eventually buys into the program. Along the way, he meets with all manner of characters who help serve Hanson's purpose of delivering genuine history within the Trojan horse of an action-packed war story, including a prostitute who doesn't have a heart of gold, but who could easily afford to buy one with her fabulous wealth; Epaminondas, ambitious and shrewd, with a gift for poetry; and various Spartans, servants of an evil empire about to go up in a cloud of smoke. A worthy historical re-creation: Hanson has high-minded purposes in depicting the triumph of democracy over dictatorship, but there's plenty of exciting swordplay, too." — Kirkus Reviews

"Like the author, I have a fondness for the much-abused ancient Greek Thebans, and I entirely share his glowing admiration for Epaminondas of Thebes, Sparta's nemesis and the supreme philosopher-general of all Antiquity. In this, his debut novel, the remarkable classical historian Victor Hanson does full and equal justice to both the arms and the man." — Paul Cartledge, A.G. Leventis Professor of Greek Culture, University of Cambridge