A Journal in Poetry 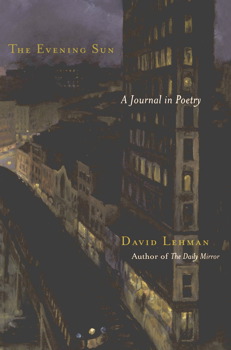 The eagerly awaited follow-up to his critically acclaimed collection The Daily Mirror, The Evening Sun gathers together 150 of David Lehman's favorite "daily poems" from 1999 and 2000 into a brilliant chronicle of a poet's heart and mind as the last century ends and a new one begins.

"What a fertile form you've discovered. The poems are completely intelligent and alive—for the reader, instructive and exhilarating." — Louise Gluck, U.S. Poet Laureate and Winner of the Pulitzer Prize, National Book Award, and Bollingen Prize

"Lehman's energy, intelligence and imagination make the book fun to read, full of pleasurable surprises and references that touch our own lives.... By the end, we have the mosaic of a year, with its glosses on daily life, and feel a sense of intimacy with the poet, who, in this easy, accessible (and carefully crafted) poetic journal, has brought us fresh news of ourselves." — Cleveland Plain Dealer

"High voltage verse.... Contemplative reflections that effortlessly engage the mind.... If at first you feel like an outsider walking in on the middle of a stranger's life story, read on. You warm to these journal entries as you go along, and soon you'll find yourself reading one several times before moving on to the next.... If the poem is, indeed, 'a renewable energy source,' David Lehman has packed 10,000 renewable watts into this journal." — Baltimore Sun

"Two years ago, David Lehman published The Daily Mirror, a collection borne from a creative challenge: to write a poem a day. The challenge became a habit, and here comes a follow-up volume: The Evening Sun. The appropriation of newspaper names is more than clever wordplay. As Lehman writes here, daily journalism is in some ways his inspiration: 'let's see / what happens when the imagination/as conceived by Wallace Stevens marries / the language as conceived by millions daily.' Lehman has a gift for demystifying the writing of poetry. His message is that poetry—or any art—doesn't descend wholly formed from on high, but is instead the determined result of dedicated daily work. If it's true that the best reporters can find a story anywhere, the best poets can find a subject anywhere, too. Sex, politics, music, movies, even the Mets are woven into Lehman's writing, which often buzzes with an immediacy that calls to mind Frank O'Hara." — The New York Times Book Review

"Perhaps the most striking thing about The Evening Sun (aside from the pure ambition behind it) is the book's array of subjects. As opposed to many other contemporary works of poetry, Lehman's work does not have any one central theme or binding set of motifs. The result is something quite unique among modern American verse; that is, with The Evening Sun, Lehman gives us an array of colorful and exacting versions of experience. His mind is as quick and angular as his words—jumping from object to idea as fluidly as he enjambs his lines.... [It] is a work that endears itself to the reader upon subsequent visitations. Humor, sympathy, philosophy, love, and history are entertwined in Lehman's words. With a plethora of subjects and an acute eye, Lehman has offered up 150 poems that effectively chronicle the end of a century and an age. As a result, The Evening Sun is an important and intriguing work of modern verse, ideally suited for readers looking for something quite unlike any poetry they've read." — Cornell Daily Sun